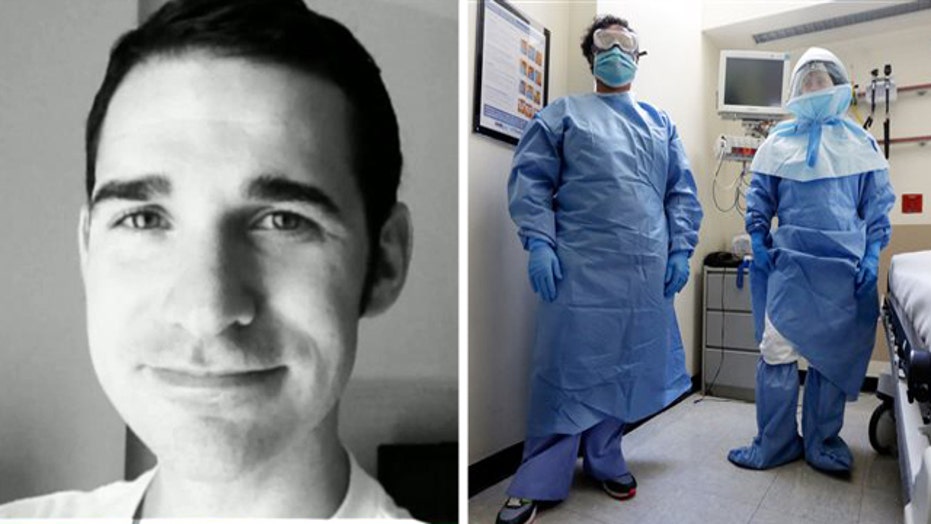 This is a rush transcript from "Hannity," October 23, 2014. This copy may not be in its final form and may be updated.

SEAN HANNITY, HOST: Joining us now in studio with more reaction to the night's breaking news is -- Dr. Richard Firshein is with us, Dr. Eric Braverman and forensic pathologist Dr. Michael Baden.

The CDC did change -- they originally said you had to have direct contact with bodily fluids. Well, that evolved into, "Well, you might be able to get it if you're three feet away."

As John Roberts reports, nobody can pinpoint the exact moment that they got this disease. Do we really have a full, complete answer?

DR. MICHAEL BADEN, FORENSIC PATHOLOGIST: No, I don't think we have a full, complete answer, but we have some answers. And I think that New York City has among the best infectious disease doctors in the country, in the world. And they're working on it. And I think that they're casting out a big net to cover everybody. I would suspect, over the weeks and months ahead, that this infection will run a course, as they have always done in Africa -- Africa since 1976 they've had Ebola outbreaks...

HANNITY: But the government has been wrong time and time again.

HANNITY: Dr. Frieden said, "You don't need a special hospital room.  All you need is a private room and a private bathroom." The president said, "In the event -- we've taken the necessary precautions working with African countries to make sure someone with the virus doesn't make it to the U.S."

HANNITY: In the unlikely event that it makes it here -- it's here.  They've gotten things wrong. Two nurses were infected, and now it's in New York City!

BADEN: Right. But so far, the precautions have kept those numbers of people who have gotten Ebola in this country quite low.

HANNITY: What about the 233 health care workers in West Africa? I would assume these are people that understand the nature of this virus.  They contracted the virus! Dr. Braverman.

DR. ERIC BRAVERMAN, PATH MEDICAL FOUNDATION DIRECTOR: Unbelievable. These decisions obviously have to be political, not historical or medical.  We know that nobody knows when they get the flu virus, who gets it in the room, who gets it in an office. It's impossible when you're dealing with 82-day incubations and semen and other fluids. I mean, he could have had sex with five women, we don't know -- or five men, and nobody knows that!

The first rule has always been quarantine and stop the fight flights in, whether it's an Ellis Island type quarantine, where a worker comes in and has to go to a special location and be watched for three weeks or four weeks or longer. You have to do that!

BRAVERMAN: It's obvious! Or you're going to have it spread all over the place!

HANNITY: Let's talk about the quarantine period. That was originally 21 days. The World Health Organization now turned -- changed it to 42 days. If you look at these numbers, they were predicting at the WHO 10,000 cases per week. They said about 10 or 12 days ago that we had 60 days to control this disease. They raised the death rate from 50 to 70 percent.

The fact that they keep changing makes people nervous. Should it not?

DR. RICHARD FIRSHEIN, FIRSHEIN CENTER FOR COMPREHENSIVE MEDICINE: I think, you know, people should be concerned. I think one of the factors here is that where we are in, you know, the best place for dealing with a problem like this. New York City does have some of the finest doctors in the world.

I think what we're all asking here is what happened with this particular individual who's clearly in contact with Ebola, came down with the virus, and he was allowed to move freely within New York City for a period that wasn't within the constrained period...

FIRSHEIN: Put his life on the line.

HANNITY: ... he contracted the disease. I agree. All of these health workers deserve to be commended. But he did go to a bowling alley.  He did use a car service. I bet those people who may have come in contact with him…

HANNITY: ... are worried about it.

FIRSHEIN: Why, if we know that someone has come in contact with Ebola, and we know that these workers are coming in contact, why are we allowing them to move freely when they return back to the United States?  That's a serious question.

BRAVERMAN: Unbelievably, he's a doctor. He knows better than the average (INAUDIBLE) so if an average individual can't -- is going to figure this out, they're not going to figure it out. I mean, they're not going to do it because a doctor did it. We need our subways with Purel. We need hygiene everywheres (ph), our airplanes (ph) hygiene. You need hygiene protection, hand washing. An entire nation is not prepared for what happened in 1919 where flu killed as many people almost as World War I!  Right?

HANNITY: Dr. Baden, you seem less pessimistic than Dr. Braverman. Do you see any scenario under which you think this might spin out of control?

BADEN: I don't think it's going to spin out of control. I think we're going to get more cases. We're going to...

HANNITY: We are going to get more cases.

BADEN: And we'll get some deaths, also. But that's the nature of epidemics. And they run -- so far, all our epidemics -- and the Ebola epidemics in Africa have run a course. People have contracted it. Many people have. And then it runs out.

And I trust that with all the precautions that the CDC is always taking, which may be too much rather than too little. We'll get it under control.