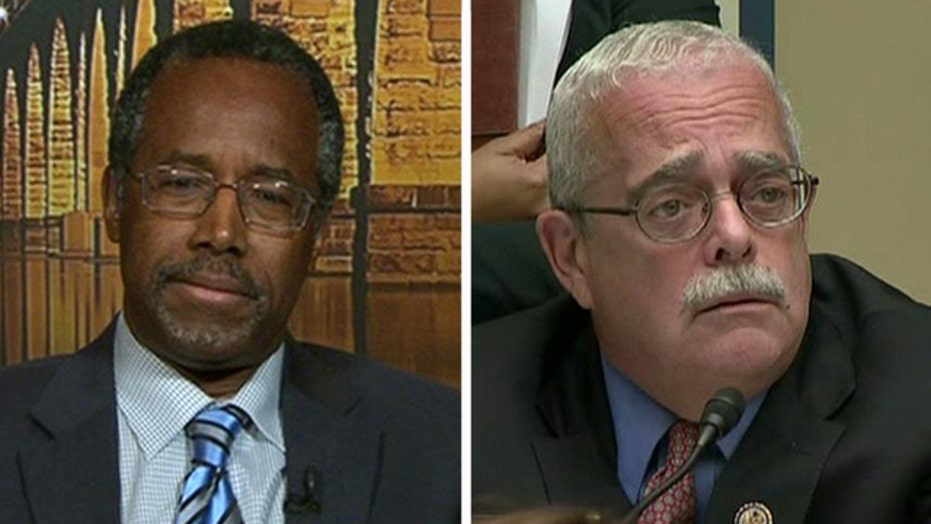 This is a rush transcript from "The Kelly File," October 9, 2013. This copy may not be in its final form and may be updated.

MEGYN KELLY, HOST: For the first time, one of the top bosses at the IRS today sat in front of Congress to answer questions about ObamaCare, tax penalties and the IRS' targeting of conservative groups. As important as it is, one top Democrat made news when he mocked the hearing with an attempt at a comedy routine comparing it all to the Salem witch trials. Watch.

REP. GERALD CONNOLLY, D-VA.: Have you been consorting with the devil?

SARAH HALL INGRAM, IRS OFFICIAL: Not to my knowledge, sir.

CONNOLLY: Are reports that you can fly accurate?

CONNOLLY: Have you been involved in any way in trying to pervert our youth in Salem or anywhere else?

INGRAM: I certainly hope not, sir.

KELLY: Isn't that funny? Joining us now for the first time is a Fox News contributor -- congratulations -- Dr. Ben Carson. Great to see you, sir.

KELLY: Thank you very much.

I was amazed to watch this hilarious back and forth in the wake of something that was very serious, so serious the president rushed out to the microphones when the IRS scandal broke and head of the IRS got booted and so on. Yet now, a couple of months later it's a laugh riot and investigation into it is compared to the Salem witch trials. Your thoughts as somebody who was targeted yourself by the IRS?

CARSON: Well, you know, it's not terribly surprising, because if you read Saul Alinsky's book "Rules for Radicals," it talks about the need to ridicule. It also talks about never having a real conversation with your adversary because that humanizes them and your job is the demonize them. Therefore, we see people saying about those who oppose ObamaCare, for instance, that they want older people to die. They want kids to be deprived of food.

KELLY: It's a serious question.

CARSON: Once you have control of them you can do whatever you want.

KELLY: One of the reasons this Democrat, Virginia Democrat Gerald Conley, was suggesting this was a witch hunt, is she was questioned about a memo between -- she used to run that group doing the targeting. She was questioned about a memo that she exchanged -- because she left it to run the ObamaCare piece of the IRS -- amemo she had with White House officials that they believe discussed confidential taxpayer information. They wanted to know whether she was sharing information she shouldn't have been sharing with White House operatives for political purposes. That was a charge she denied and so on. Holding up the memo and discussing it with her had to be dismissed instantly with this attempt at humor.

CARSON: Absolutely. You know, what's really surprising and very serious, and I think is being missed in this whole discussion, is that the fundamental relationship between the people and the government is shifting, and has shifted with the implementation of the Affordable Care Act. It puts the government now at the pinnacle of the power structure. We are now government-centric as opposed to people-centric. I don't think the average person even understands what's going on. This is very, very serious.

KELLY: She was asked why should the American people trust you, why should they trust the IRS in the wake of everything we have seen? And she tried to assure Congress today that there were firewalls now that are put up. Because when you go online to exchanges and -- if you can get on -- and get your information in, that information is sent to -- ultimately the IRS can access it. The question is ,who's watching the IRS? Who is going to prevent them from sharing it with somebody they shouldn't share it with? And she says, trust us.

CARSON: As I've said before, you know, the IRS is currently under investigation by the House Ways & Means Committee. When in the past have you taken an organization that's under federal investigation and placed them in charge of a major new program? Does that make any sense at all?

I don't know what's happened to common sense in our country. We need to get it back in a hurry.

KELLY: I saw you on O'Reilly a couple of weeks ago talking about it. But I know you do feel that you were targeted by the IRS -- you find the timing suspicious -- shortly after you spoke out against ObamaCare in unfavorable way at the National Prayer Breakfast. The evidence on that pretty compelling. Any other people come out to you after that testimonial, Dr. Carson, and offer similar stories to you?

CARSON: Yes. Many people have told me that. I get it every place I go. But the interesting thing is the agent who is in charge said, "Ben Carson? I don't know who Ben Carson is. The National Prayer Breakfast? I didn't hear anything about this."

You know, what I'm saying is, even if it was accidental, are they so incompetent that they have no idea who either investigating, in which case they need to find another job. If they are targeting people, that needs to be investigated, exposed and corrected before they are in charge of something so important as one-sixth of our economy.

KELLY: I mean, I remember people crying, the conservative and Tea Party groups crying before members of Congress about the pain and suffering they went through as the IRS probed into their personal lives, families and so on. Just to see them yucking it up as questions are asked of the IRS official today, the optics are not so good.

CARSON: We see the House being demonized for exercising -- doing what they are supposed to do. We have a divided government so you can check excesses.

CARSON: Thank you. It's so nice to be with you.