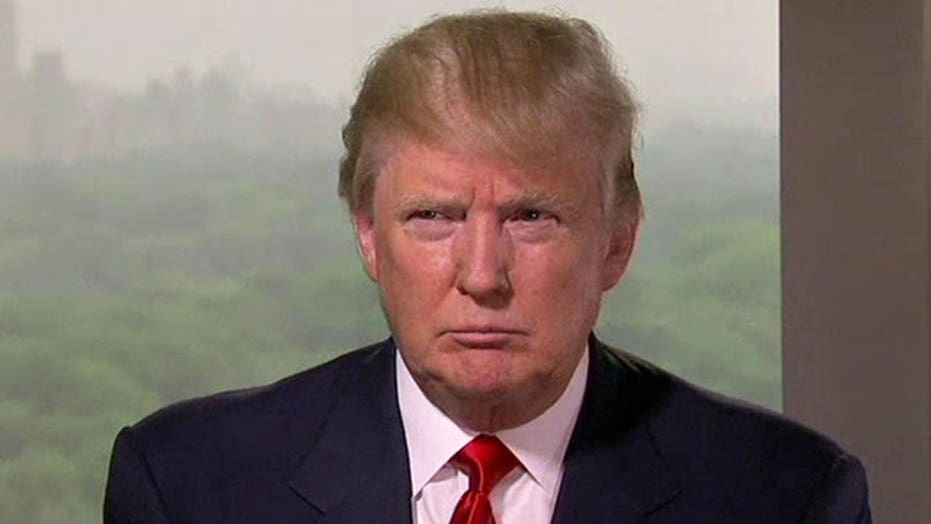 Hi, I'm Bill O'Reilly. Thanks for watching us tonight. The "Talking Points Memo" a bit later on about how liberal policies are actually keeping low income Americans down.

But, first, "A Factor Exclusive". Donald Trump running for president.

TRUMP: Ladies and gentlemen --I am officially running for president of the United States, and we are going to make our country great again.

O'REILLY: Along with that announcement, the 69-year-old Trump released his net worth today about $9 billion with a "b". He spoke for the better part of an hour basically saying that current politicians are wimps who will never solve the intense problems America currently has. Trump says is he can solve them.

Now, I have known the man for almost 30 years. I have done some business with his jet fleet and occasionally we go to sporting events together. So he wanted his first post announcement interview to be on The Factor. Good for us.

O'REILLY: So this is like the lightening round here.

You just tell me how you're going to solve these problems.

O'REILLY: ISIS. How are you going to defeat ISIS?

Now remember, and I sent you the document. I said in '04 we should not go in and do that whole thing with Iraq, it was a disaster, because I said Iran will take over and it will totally destabilize the Middle East.

There's nobody bigger or better at the military than I am.

O'REILLY: Are you telling me you are going to send American ground troops into Syria?

TRUMP: I'm not telling you anything. And the reason I'm not is because if I run and I win, I don't want them to know the game plan. Let me just say something --

O'REILLY: Are you going to put American ground troops in to chase them around?

O'REILLY: But how do you take it back?

TRUMP: Well you bomb the hell out of them and then you encircle it, and then you go in. And you let Mobil go in, and you let our great oil companies go in. Once you take that oil they have nothing left.

O'REILLY: All right. So you don't respect them. You don't --

TRUMP: I don't have any respect for them, no.

O'REILLY: All right, so they're out.

O'REILLY: Syria, are you going to violate their territory?

TRUMP: No, interestingly Syria's supposed to be our enemy. Iran and Russia are protecting Syria and it's sort of amazing that we're in there fighting ISIS in Syria so we're helping the head of Syria who is not supposed to be our friend although he looks a lot better than some of our so-called friends.

It's really rather amazing, maybe Syria should be a free zone for ISIS, let them fight and then you pick up the remnants.

O'REILLY: All right. In order to defeat ISIS you're going to have to invade Syria. There's no way you can defeat them without invading. And I guess you're willing to do that.

TRUMP: I disagree. I say that you can defeat ISIS by taking their wealth.

TRUMP: Their wealth is the oil

O'REILLY: You mentioned Iran. Would you make a new deal with Iran? I mean they're obviously playing games over there.

TRUMP: I would make a deal but I wouldn't make that deal. That deal allows them to do practically whatever they want. The inspections -- wait -- the inspections are going to be a disaster.

If we look and if you look at what's going on with this lack of negotiation right now. As sure as you're sitting there, Iran is doing nuclear. They're going nuclear.

O'REILLY: So what do you do with them?

Look, the biggest problem that the world has right now is nuclear weapons. Global warming is not our big problem. Our big problem is the maniacs that are controlling weaponry that has never been like it is today.

It's very important to make nuclear deals but you have to make them from strength, not from weakness. And once they have the weapon it's all over (ph)-- then we don't have the strength any more.

O'REILLY: Ok, the problem with the sanctions is that you're not going to get cooperation from Germany and these other countries.

O'REILLY: But they haven't worked with us.

TRUMP: You have Obama that wants to play golf instead of deal with people. You know part of being a leader is to get everybody in line and get them.

O'REILLY: And you think you could convince?

TRUMP: Yes, I think I could. I really - that's what I've done. I've made a fortune with foreign countries.

O'REILLY: Putin. What do you do to Putin?

TRUMP: Well, Putin has no respect for our president whatsoever. He's got a tremendous popularity in Russia. They love what he's doing, they love what he represents.

So we have a President who is absolutely, you look at him -- the chemistry is so bad between those two people.

O'REILLY: So you could make a deal with Putin to stop his expansion?

TRUMP: I would be willing to bet I would have a great relationship with Putin. It's about leadership.

O'REILLY: Based on what? You're two macho guys? I mean, you know --

TRUMP: No, no, no I mean based on a feel. OK, you know deals are people.

O'REILLY: You sound like George W. Bush. He looked into his soul and said he was a good guy. Come on.

TRUMP: Bush didn't have the IQ. Let me just tell you.

O'REILLY: You know what I'm picking up from this. You'd buy Putin. You'd buy him almost.

TRUMP: And I'll tell you what. It's actually important for this country to do that.

You can't have everybody hating you. The whole world hates us. And one of the things that I heard for years and years, never drive Russia and China together. And Obama has done that.

TRUMP: Let me tell you. The Mexicans are the new China. What they are doing to this country --

O'REILLY: They're not going to pay for the wall.

TRUMP: You have to let me handle that, ok.

O'REILLY: Well tell me how you're going to make them pay for the wall.

TRUMP: Because they are ripping us so badly.

TRUMP: Because I'll cut off all -- I'll start charging for their product coming into this country. Mexico is living off the United States.

O'REILLY: So you'd try to strangle them economically unless they paid for the wall?

TRUMP: They will pay for the wall. And the wall will go up and Mexico will start behaving. Mexico is not our friend.

O'REILLY: Or you'll break them economically.

TRUMP: I will do something that they will not be thrilled.

The Chinese hacked into our Federal Government system. What do you do to them for that?

TRUMP: Well you're going to have to do something with China economically also.

O'REILLY: Why give it back?

O'REILLY: What do you do to China? Their powerful.

TRUMP: What you do to China is you say if you don't behave we're going to have to start taxing your goods coming into this country.

O'REILLY: All right. A tariff.

TRUMP: They charge us tariffs. We don't charge them because we're stupid. They charge us. And the largest bank in the world is right under this floor.

O'REILLY: And you really think you're going to get it through?

TRUMP: Absolutely. I've been dealing with politicians all my life.

O'REILLY: They're going to fold under you?

TRUMP: Not fold. They're going to make -- that's just what they do Bill.

TRUMP: I think so absolutely.

TRUMP: I think so.

Now let's turn to domestic issues. The reason that we have income and equality, why you make an enormous amount of money and other people don't is because you're very well-educated. You look out of your window here in Trump Tower, you look over to Harlem you've got kids who don't know anything with bad parents and terrible public schools.

O'REILLY: How are you going to fix it?

The African American kids are in worse shape now than they've ever been and we have a black President. This was not supposed to happen. You have to create incentives for people to work. You have to create jobs. We have to create the kind of an economy where people can go out of work where they're making more money than sitting back and doing nothing.

O'REILLY: But that's the federal government creation. You know you've got to get the private sector to do that.

TRUMP: No you can - you can stimulate through incentives. You can do tax free zones. You can --

O'REILLY: But to make the kids learn in school how -- what incentive are you going to give them?

O'REILLY: But your government can't mandate a good parent.

TRUMP: No, it's a huge problem.

I would sit down with the best and the brightest. I also happen to think it's one of the most difficult problems that we have. But we have a President that in theory should have been focused on this and I'm sure he cares about it but he certainly did a poor job. Because if you're an African-American youth right now you're in worse shape than you practically ever were in the history of this country.

O'REILLY: The culture is driving that.

TRUMP: It's a tough culture.

O'REILLY: Hillary Clinton first woman President -- war on women. You going to - you're going to walk right into that.

O'REILLY: But if you attack her you're going to be anti-women.

TRUMP: It's all right. And you know what, and maybe I don't win for that reason. But maybe I do.

O'REILLY: Final question. Your Republican rivals. They're going to come after you, you know that.

O'REILLY: You don't really take criticism all that well. You lash back --

O'REILLY: Well now the President is supposed to have some kind of elevation, you know, where you have to overlook some things. You're not real good at that.

TRUMP: Well, I get things done, better than anybody.

O'REILLY: All right. Are you going to slash and burn through this Republican field?

TRUMP: Well I don't have a lot of respect for many of them. And I can tell you --

O'REILLY: Anybody you respect?

When I tell somebody to do something I'm not going to get a lobbyist calling me the next day to say please don't do that even though it's good for America.

O'REILLY: You've got to go through --

TRUMP: You're right and I've been going through them all my life.

O'REILLY: All right, you're telling me you could do it.

TRUMP: I've been dealing with them all my life.

O'REILLY: All right. The first debate is Fox and in the top 10 on the polling average you're going to get in. So you may very well get into that debate.

O'REILLY: So you're going to slash and burn.