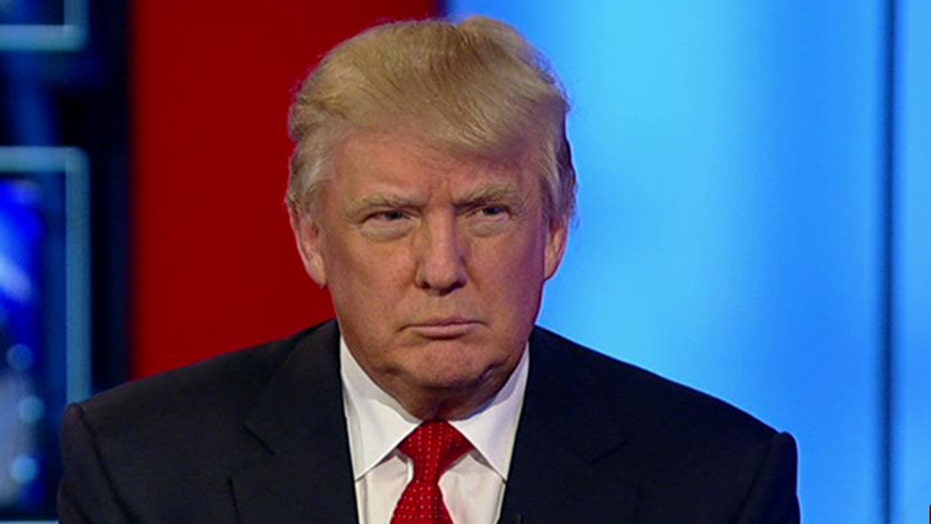 Donald Trump on the 'lack of respect' for America

Outspoken billionaire discusses where we are as a country

This is a rush transcript from "Hannity," April 16, 2014. This copy may not be in its final form and may be updated.

SEAN HANNITY, HOST: The one and only Donald Trump. How are you?

HANNITY: I am on this season's "Apprentice."

TRUMP: That's right. I understand you're helping a very good friend of yours.

TRUMP: I can only say he's doing very well thus far. You'll be proud of him.

HANNITY: If you say he's fired, it's not going to be because of money because he's working it hard.

TRUMP: He is working it hard.

HANNITY: I don't like heavy-handed government -- 200 agents, snipers surrounding a ranch. Seems a little over the top to me.

TRUMP: It's over the top. It's very strong. I like him. But you also have to say -- and I watched you last night with the little debate you had going, and she did a very good job.

TRUMP: Because you do have certain law. You know, I mean, you have it all throughout the United States, and they pay their fees and they pay all sorts of grazing fees and things that I'm not so accustomed to. You know, if I were Cliven -- and I like him, I like his spirit, his spunk and I like the people that -- you know, they're so loyal...

TRUMP: I do like him. I respect him. He ought to go and cut a good deal right now. That's the best thing that could happen for everybody. It's really vicious. I'm not involved very much in it. I see it a little bit by watching you. But he ought to go out and cut a great deal.

TRUMP: Yes. What's he going to do? Are they going to start shooting each other over grazing fees?

HANNITY: Honestly, my brother-in-law was there all weekend and he thought it was coming to that. He said...

TRUMP: Well, a lot of people thought that. He ought to go out. He's in a great position, I think, to cut a great deal, and that's what he should do.

HANNITY: I thought Judge Napolitano hit the nail on the head. Let the government go to court, they get an injunction, he can't sell the property, there's a lien on -- on different things. And then they move forward.

HANNITY: Why are we using all these government resources and spending all that money for...

TRUMP: Well, I agree with that, but they do have laws and you do have laws in the country, and you know, if everybody did exactly what he's doing, I don't know, where does it all go? So this is a great time for him to go in and make a deal.

HANNITY: All right, let me -- you -- by the way, I've got a front cover. It's not the best cutout here, but you were in the New Hampshire Sunday News. There were a bunch of GOP front runners for the presidential election in 2016. You're the one that got on the cover. You were at the GOP summit.

HANNITY: And you had a lot to stay about the state of the country, and it's not very good and it's something you and I have discussed at length. How bad is it?

TRUMP: It's bad. It's really bad. It's never been -- I think we've never had this lack of respect for the country. Our president is not respected. You look at no matter what's happening, it's a mess. Secretary of state-wise -- I mean, has there ever been a worse time for this country in terms of what we're getting and what we're talking about and what we're doing with other countries? Putin is having a great time toying with the president.

HANNITY: I wouldn't be surprised if he had the Ukraine by Monday.

We don't seem to do anything. You look at what's going on with Israel -- I mean, Israel is in big trouble because of Iran. Now, they were talking so much about Iran with the nukes and everything else, and then they gave up all of the things that we had with respect to Iran. They just dropped it. They dropped it. And it sounded like a deal was made. No deal was made. They're making nuclear weapons. I don't think you can allow that to happen. It's devastating for Israel if you do allow it to happen, and so...

HANNITY: And the Iranians basically stuck their middle finger in Obama's face again. Who did they appoint to the U.N. as their ambassador, but one of the hostage takers from 1979.

HANNITY: All right, so you were there. One of the things -- all the time that I've gotten to know you, you're just a straight shooter. You know, you have a problem -- I'm sure many problems are brought to you on a daily basis. You come up with an answer, a solution. I don't like where we are as a country. I don't like 50 million Americans on food stamps, 50 million in poverty, you have the lowest labor participation rate, 92 million Americans can't get work. So I've come up with what I call...

HANNITY: Never been this bad.

HANNITY: And I want Americans to work. I want this -- I want to be energy-independent so we don't need to buy oil from Saudi Arabia. So I came up with what I call conservative solutions. I want to get your reaction to it.

HANNITY: Here's what it is. On the economy, I say the penny plan. You stop baseline budgeting, you cut one penny out of every dollar every year for six years, and you get to a balanced budget. You follow that up with a balanced budget amendment. You put a limit on the percentage of anybody's tax liability so you can incentivize people to keep money in the U.S.

Those five things, I think, turns America around!

TRUMP: And I will tell you this. Not even a thing I can say. Who can argue with that? I mean, they're all good. We have to balance the budget at some point. We have tremendous deficits right now. We owe $17 trillion. Never happened before. Now, the $17 trillion is going to be very quickly at $21 trillion. You know that's going up very, very quickly.

TRUMP: And if you think of it, we have low interest rates right now because we've set them artificially low. So we have a -- when we have to start paying normal interest -- even normal, you're going to see deficits like you've never seen before.

HANNITY: The feds are pumping $65 billion a month. They were up to $85 billion.

TRUMP: And even now, more than that.

HANNITY: Seventy-five billion. All right. That's a lot -- so they're artificially keeping down those rates, but they will rise.

TRUMP: What we have -- we're in a mess. We've never had a mess like this, and we have poor leadership.

HANNITY: All right. I agree, and I'm more angry at Republicans than I am at Democrats. I expect the Democrats to push for more spending, deficit spending, social programming, engineering. Republicans -- they think they're going to ride this anti-ObamaCare wave right into victory in 2014, and I'm saying they've got to come up with positive solutions...

HANNITY: ... and be innovative and create a vision that people can support, or else -- what are they going to do to fix this?

TRUMP: Well, I agree with you except that ObamaCare is the one thing that resonates with the voters because it's costing them a fortune. They're getting terrible -- the plans are terrible. And you talk about the no doctor, no this, no that, no plan, no nothing. "Obama care" resonates - - and I can see that if people play the heavy ObamaCare -- and I don't want to say card, but that's what it is -- you're going to have a lot of Republican victories. You're going to have -- in my opinion...

TRUMP: Is ObamaCare. So I think they have to play that up very heavily.

HANNITY: If Donald Trump -- if you did a business deal and it was predicated on three big promises -- one, keep your doctor if you like your doctor, period, keep your plan if want to keep your plan, and you're going to save $2,500 per family per year -- and it results in millions losing their doctors, their plans and their premiums are tripling and doubling. What would happen to you in the private sector?

TRUMP: Here's what I don't understand. It was a lie. It was a lie and they know it was a lie. It was said many, many times and it was purely a lie. And even the Democrats were lied to, and they would have never voted had they known, because a lot of them are going to lose positions right now. I don't understand why aren't -- why isn't there litigation saying this was gotten under a fraud and under a false pretense?

TRUMP: And I don't understand why.

HANNITY: I don't understand, either, because it wouldn't work in your world, right?

TRUMP: Now, perhaps there are some cases. But I don't know how they can get away -- ObamaCare has been a big, fat lie, and somebody should do something about it. It is really -- you talk about the economy. ObamaCare is really destroying the economy.

HANNITY: Job killer. Yes. You going to run for president?

TRUMP: ... if they're smart and if they do it right. We'll see what happens after that.

HANNITY: Are you buying the Buffalo Bills?

TRUMP: Well, they want me to and we're looking at it...

HANNITY: By the way, I've been up there during games, and I got to tell you, the whole -- they tailgate all the way to the stadium. There's a huge...

TRUMP: They love it. They have such -- so we're going to take a serious look at it.

HANNITY: All right. Good to see you, Mr. Trump.

HANNITY: By the way, this is a Trump tie. I wear Trump ties every night.

HANNITY: And I wear Trump cologne you sent me. You sent me your ties. But I do love them. They're the best I've had.

HANNITY: And you get them at Macy's.

TRUMP: You get them at Macy's.