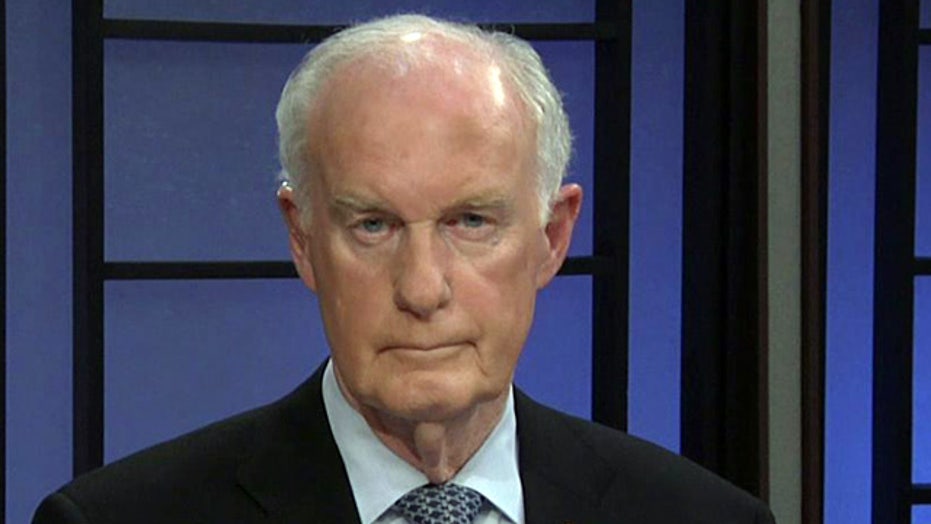 This is a rush transcript from "Hannity," March 20, 2014. This copy may not be in its final form and may be updated.

SEAN HANNITY, HOST: This is a "Fox News Alert." We have now confirmed tonight that the Malaysian airline pilot's home flight simulator is en route to the FBI headquarters. That's in Quantico, Virginia.

Joining me now to talk about this and much more, Fox News military analyst, Lieutenant General Thomas McInerney. General, welcome back to the program. Always good to see you, sir.

RET. GEN TOM MCINERNEY: Thanks for having me, Sean.

HANNITY: You know, I know that you have a lot of sources. I know that you can't reveal them all to us. We had you on the program the other night, and it got a lot of interest from our viewers, your belief, that, in fact, this plane -- and sources that are -- that you're connected to are telling you that it may very well have landed in Pakistan. In light of this new information tonight, are your sources still confirming the same thing?

MCINERNEY: I can't say anything about that, Sean. all I can say is it would be nice, if we could identify it. But I think those passengers have the potential of still being alive.

MCINERNEY: And I believe that airplane landed. I believe that airplane landed. And I've listened to a lot of aviation experts, and none of them know anything about radical Islam. And so I think that's one of the major shortcomings, to think, as well planned as this was -- and you just went through it with Mr. Kay on how the transponder was turned off, they said good night, ACARS went off, transponder -- take the line from the last transponder hit and then take the line from the Thai radar skin paint, and draw that line and see where it goes.

It heads straight for India. It doesn't go to the Indian Ocean and the South. Why would anybody be so clever to do that, and fly the airplane for seven-and-a-half hours and then let it flame out? I don't believe that.

HANNITY: You know, I know you as such a serious person. You make such a compelling case. You make me pause every time I talk to you, General. You turn the transponder off. You turn -- I'm looking at the timeline now. ACARS is off. Then we've got the computer manually. We've got the flight -- a new flight path put in. And then we say, "Good night." That doesn't fit. That doesn't fit.

I read a story today, somebody said, Well, it could have been a simple fire. The problem with that is you wouldn't have said "Good night" at that point. You would have contacted somebody. Again, looking at the timeline, transponder off, ACARS off. Then we have a computer shift in the flight path. That sounds to me -- I'm very strongly leaning that this plane was taken over by somebody.

MCINERNEY: Yeah, I still maintain it was hijacked. And for anyone to say, Well, they had a fire or something -- look, we never heard a mayday. All the communications, the coms, the UHF/VHF satcom, to our knowledge were never turned off. And so they could have talked, if they wanted.

So that's why I have not seen one piece of compelling evidence, to include these satellite pictures, that tell me that that airplane is down there. Now, it could very well be...

MCINERNEY: ... but I haven't seen any evidence.

HANNITY: General, without exposing any of your sources, is there any way, for our audience's sake, that you could shed light on what you believe to be the credibility of the sources that you obviously are talking to, because you're not making this up out of whole cloth.

MCINERNEY: No, but it is not my sources. It's the logic that goes into everything that has come up, explains and tracks with what I was talking about. How about the other day when we were on the radio and you talked to some of your very good friends in Boeing, and what did they say, Sean?

HANNITY: They said I can't talk about it, Because my question to Boeing is considering we know that the Boeing -- these 777s have really incredible, not only redundancy, but they have incredible communications where literally the engines are constantly sending back information as to the exact function at any moment during the flight. So my question to my friend at Boeing was, tell me, what you know about these engines and what do you know about this plane? He said I can't talk about it. And that kind of surprised me.

MCINERNEY: It surprised me, too. And what have we heard from our own intelligence agencies about certain airfields, particularly the one near Quetta, Pakistan. As I mentioned the other day on the radio, the distance from Lahore to Beijing, excuse me, Kuala Lumpur to Beijing and Kuala Lumpur to Lahore, Pakistan, is 2,700 miles, equidistant. Isn't that a coincidence?

HANNITY: Oh, I'm sorry, go ahead, finish your thought then I have a last question.

MCINERNEY: No, so all of those things track in the northern route. By the way, it is taking so long I'm not sure that that airplane landed in Pakistan that is still there. But we have not heard from the U.S. government of any substantive information. And they know a lot more than they're saying.

HANNITY: For the constraints of time that we have, you do have sources and you are of the belief that our government in particular has a lot more information. Can you confirm that you have sources that also are adding to your theory?

MCINERNEY: Not now, I can't. As you know I'm in the witness protection program right now.

HANNITY: Also the engines were trying to send back the data as to their performance. So that was also adding to the ping, and that was what? Seven hours into the flight they were pinging, right?

HANNITY: All right, this is bizarre to me. All right, general, good to see you, appreciate it.