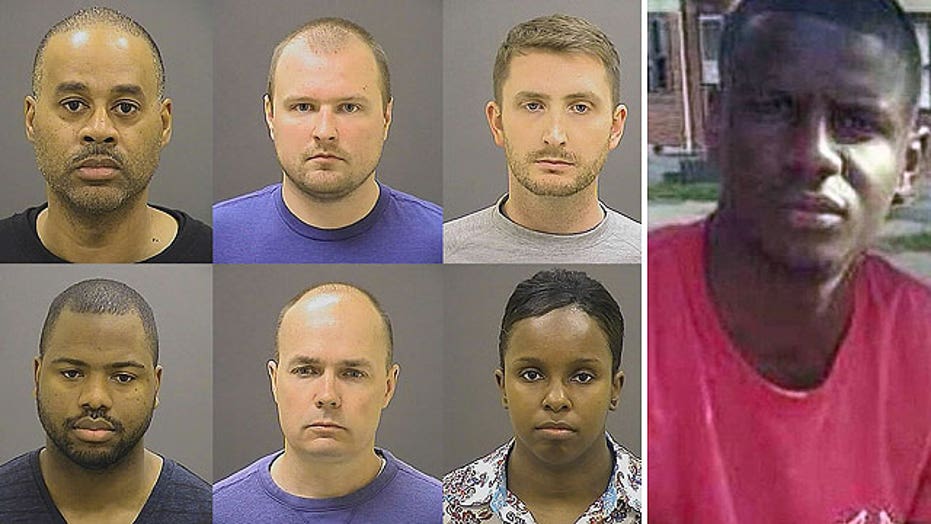 This is a rush transcript from "The Kelly File," May 21, 2015. This copy may not be in its final form and may be updated.

MEGYN KELLY, HOST: Breaking tonight, Baltimore's top prosecutor announcing new charges for the cops arrested in connection with the death of Freddie Gray as a grand jury returns indictments for all six of the officers involved, and Baltimore is under siege.

Welcome to "The Kelly File" everyone, I'm Megyn Kelly.

The news broke late today, the six Baltimore police officers involved in the Freddie Gray case are now facing a new charge of reckless endangerment for their alleged role in his death as prosecutor Marilyn Mosby announces some major revisions have been made to the slew of allegations already facing these five men and one woman. Mosby has taken serious fire in recent weeks over how she's handled this case. "This is our moment," she announced to Baltimore.

And when the questions came today, watch what happens.

MARILYN MOSBY, BALTIMORE STATE'S ATTORNEY: As I've previously indicated, my office conducted an independent investigation into the circumstances surrounding the tragic incident with the death of Freddie Gray. On May 1st our investigation revealed that we had sufficient probable cause to bring charges against six police officers. As our investigation has continued, additional information has been discovered and as is often the case, during an ongoing investigation, charges can and should be revised based upon the evidence. These past two weeks my team has been presenting evidence to a grand jury that just today returned indictments against all six officers.

UNIDENTIFIED MAN: Will you recuse yourself from this case, Ms. Mosby, and why not if no?

KELLY: Arthur Aidala is a Fox News legal analyst and a New York trial attorney. Mark Eiglarsh, he's a criminal defense attorney and former prosecutor. You guys are both former prosecutors, thanks for being here.

KELLY: And so this isn't about me, but this is what I said on this show last night. Listen.

KELLY: And false imprisonment is gone. Sure enough today, it's gone, because she doesn't have the basis, but Mark, she also didn't have the guts to revoke her false arrest charge, which is equally baseless.

MARK EIGLARSH, CRIMINAL DEFENSE ATTORNEY: Right. Listen, people are applauding, somehow the grand jury is now validating her arrests here. The grand jurors are mere puppets for the prosecutors. They will do what is presented. It's like a debate tournament where only one side gets to argue. The other side has to wait outside, and the other side that doesn't get to come in is the defense.

So the prosecutors simply lay out what they think the evidence might show, the defense doesn't get to come in, the burden of proof is only probable cause and they will do whatever the prosecutors wanted, including if they told him it was unlawful, they would indict Arthur for being bald and beautiful.

AIDALA: But with the greatest amount of respect on your birthday, Mark, I'm going to --

AIDALA: I'm going to respectfully disagree with you.

EIGLARSH: Go ahead, you're entitled.

AIDALA: Look what happened in Ferguson, a police officer who was potentially being charged was outside of that jury room, the prosecutors in there seeking an indictment and presenting evidence to get to the indictment --

KELLY: That was totally different. Because that prosecutor chose to present all of the evidence, including the exculpatory evidence, which was what was unusual in that proceeding.

AIDALA: Here's my take away from this, Mark. They still take the highest count. Megyn, I thought that was -- when she started your statement that you just played, I thought she was going to say after this investigation the change is charged so we did not present murder in the second degree, we reduced the charges to criminally negligent homicide, which is a much lower standard.

EIGLARSH: Yes, don't give her that kind of credit. No.

AIDALA: She didn't do that and I don't know how this grand jury indicted on the evidence.

EIGLARSH: I'll tell you how, Arthur.

EIGLARSH: Arthur, I'll tell you how. These jurors and candidly most of America, they don't know the difference between second-degree murder, manslaughter or mere negligence, meaning a tragic accident where criminal charges should not be brought. With no one in there like you or me explaining that it takes recklessness, a willful and wanton disregard of human life to justify a second-degree murder charge. There's no chance that they are going to turn their back on these prosecutors.

KELLY: Here's what I think was dishonest of this prosecutor this week. And you tell me whether it's true, Arthur, because I haven't heard you weigh in on this. She initially came out and said that that false arrest, false imprisonment charge was based on the fact they arrested Freddie Gray for having an illegal knife which she claimed was, in fact, legal. And then the defense came out and said, bull, that knife is illegal. Look at Baltimore law, don't look at Maryland law, and produce the knife and we'll prove it to you. She refused to do that. She came out and said they don't know what they are talking about, and then quietly she came out this week and said, "Oh, knife, what? Those charges aren't based on any knife," and then lo and behold we get before the grand jury today, and false imprisonment is gone. She's not being straight.

KELLY: Because she knew she didn't have it and knows she doesn't have false arrest either.

KELLY: That and there it is.

AIDALA: So, there's no way that would have stood up in a court of law.

KELLY: There it is. OK. But we have a prosecutor here who does want to put police officers behind bars. And what we've seen so far, I mean, the theory of the case is absolutely, and this has been supposedly backed up by the medical examiner, that Freddie Gray died inside of that van. Not died, but had his injury inside of the van, not before. And my question all along, Mark, has been the -- twofold. One, what are those initial officers doing charged in this case? You're going to make an argument about rough ride, maybe you get to reckless endangerment, the new charge she brought against them. I don't see how you get to murder.

KELLY: Right. So, maybe you get to reckless endangerment, but what are those initial arresting officers doing in this case?

EIGLARSH: You're asking the question I've been asking for weeks now.  In all fairness, let's throw out there that you, me, Arthur, and the world, we don't know all the evidence, right? So, maybe there's a busload of nuns that she had that overheard these guys conspiring to arrest poor Freddie Gray.

However, she would have suggested that at that press conference, that 20-plus minute press conference where she's telling the world the best evidence she had. I don't believe that those guys should have been prosecuted but for politics.

KELLY: Here's my other question, because now we're hearing more and more about a possible change of venue, that the defense attorneys are going to want a change of venue. And my question to you, Arthur is --

AIDALA: It totally depends on the judge. Megyn, that happens all the time, we call it a bench trial.

AIDALA: You don't know Mark. In New York City, the Sean Bell case was a huge case, they tried the case in front of Judge Cooperman and he acquitted all the police officers in that case. It was big huge news case here.

AIDALA: You can't judge like that. What do you say about the judge who --

KELLY: Well, what's interesting is, if it gets moved, it gets moved within the state of Maryland, presumably.

AIDALA: Which is a tiny state.

KELLY: Right. And the racial makeup of the jury changes most likely depending on where it goes.

EIGLARSH: As it did in O.J.

KELLY: Prince George's County is mostly African-American, most of the rest of Maryland is not, that will play in, but Marilyn Mosby's office continues prosecuting the case wherever it goes. Quickly.

AIDALA: Megyn, real quick. Where is the other guy in the van? He may be the nuns that Mark is talking, he maybe the witness who said --

KELLY: The other prisoner?

KELLY: Oh yeah, I'm sure he's going to be a really credible witness.

EIGLARSH: Probably a record dating back to the disco crisis.

KELLY: He can't be worth the time that they'll give him on the stand. I'm with Mark on that and I'm just with Mark in general because it's his birthday. Happy Birthday!

EIGLARSH: Justice for all, not just for one.