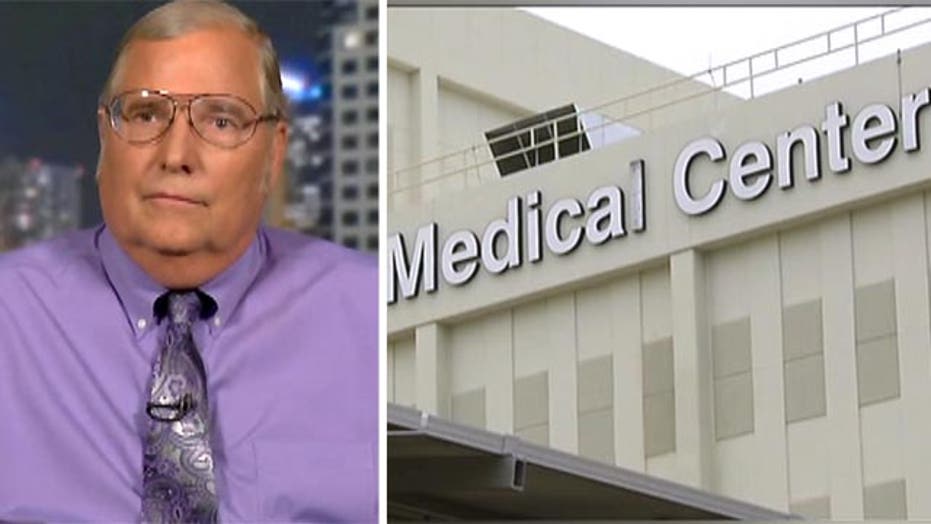 Doctor speaks out after veterans die waiting for care

This is a rush transcript from "The Kelly File," April 24, 2014. This copy may not be in its final form and may be updated.

MEGYN KELLY, HOST: Developing tonight, U.S. senators are demanding a Congressional investigation into stunning claims that a Phoenix VA is covering up some ugly details in dozens of veterans' deaths. And the shocking allegations don't end there.

Trace Gallagher has the very latest and then we'll speak to the former VA hospital doctor who is blowing the whistle in this case. We start with Trace -- Trace.

TRACE GALLAGHER, FOX NEWS CORRESPONDENT: And Megyn, we have the letter tonight from Arizona's two U.S. senators demanding the Senate investigate this and here is what John McCain said. Play this.

SEN. JOHN MCCAIN, R-ARIZ.: Never before have I seen an allegation of the cover-up of 40 people dying. This raises it to a level that is unprecedented, and that's why we have to use every instrument of government to get to the bottom of this, and if it's true, hold those accountable.

GALLAGHER: The alleged cover-up McCain refers to involves 40 deaths is at the Phoenix VA health care center was keeping two lists for patient appointments. An official list that was sent to Washington showing that patients apparently were being sent and required and seen in that 14 to 30 daytime period, and a secret list that no one saw where patients could wait a year or more to see their primary care physician.

The only way to get off the secret list and on to the official list was if your appointment came up in that 30-day window. Seventy one-year-old Thomas Breen came in with blood in his urine, he was sent home. He died two months later, he was never seen by a doctor. He was never diagnosed and never treated. Here is his daughter-in-law. Listen.

SALLY ELIANO, DAUGHTER-IN-LAW OF THOMAS BREEN: Because he said I'm dying, and it's too late. The VA didn't help me. And I cried and I said please, pop, you have to fight. We can do this. We'll do it together.

GALLAGHER: Documents indicate high-level employees may have known about the list. The Phoenix VA medical director Sharon Helman denies it. Listen to her.

SHARON HELMAN, VA MEDICAL DIRECTOR: I have never directed staff to do a secret waiting list.

GALLAGHER: Yet, Helman was included on and at one point responded to an e-mail chain where an employee complained about a later that was sent out that bragged about timely patient care. The employee wrote, quoting, "I think it's unfair to call any of this success. Sure, when their appointment is created, it can be 14 days out, but we are making them wait six to 20 weeks to create that appointment."

The inspector general for the VA is investigating this, so is the House Committee Megyn, but it appears they heat on this whole matter is rising even further -- Megyn.

KELLY: This is unbelievable. Trace, thank you.

Our next guest is the whistle blower behind these stunning allegations. Dr. Sam Foote is a retired VA doctor who recently retired after spending 24 years in the Phoenix Veterans Affairs Health Care System. Doctor, thank you for being here.

And I want to tell the viewers that your allegations have been backed up reportedly by other top officials at the veteran's hospital. You're not the only one now. You were the most vocal and you were the bravest apparently because you've gone on the record first.

But you say, literally, that veterans are dying and have died as a result of this shotty system at the Phoenix VA where they are literally just ignoring veterans until they die. Explain.

DR. SAM FOOTE, RETIRED VETERANS AFFAIR DOCTOR: Well, Megyn, what happened was in February of 2013, they started a secret waiting list, it was a paper list. So when you would come in for an appointment they would tap your information into the computer and then rather than hit save, they would print it and there was actually no record that you had ever been there in the computer. They would take that piece of paper up to HAS -- Health Administration Services -- and then they would enter that on a secret paper list at that time and then shred the other document.

KELLY: And then they never put you in the real computer and made a formal record of you as a veteran needing care, until they actually could get you in within two weeks and that's how they doctored their numbers and sent them back to Washington, right?

KELLY: So why would this administrator -- Ms. Helman -- and why would those underneath her do this?

FOOTE: Well, we felt it was part of the scheme to try to get herself a bonus by having the waiting times look better than they really were, and we're still waiting confirmation to find out if she really did get a bonus on that.

KELLY: But, you know, I mean, this is beyond trying to get a bonus. I mean, you are causing the death effectively of our veterans. I mean, she would have to be evil. I mean, this isn't just about bonuses. This is somebody who was an evil person if this is true.

FOOTE: Well, we don't actually know what the people on the list died of because we never got a chance to see them or examine them.

KELLY: Right, but when you put them in purgatory forever, you know what's going to happen.

FOOTE: Well, purgatory forever would be a little long. Probably five to six, seven months would be more accurate. But in terms of -- like you said that people -- we don't know what they died of. They could have been hit by a bus or they could have had preventable heart attack that we could have done something for. We just don't know because we never got the chance to see them.

KELLY: I mean, it's amazing because now she comes out and weekly -- I have to say weekly -- denies the charges and says if -- hold on. I want to find them because it was interesting how she put it. Basically says, "I have never directed staff to do the secret waiting list and if the inspector general finds anything, then we'll take appropriate and swift action." I mean, is this person, Ms. Helman, Sharon Helman who directs the Phoenix VA, at the heart of all this, doctor?

FOOTE: Well, we've relieved that the senior management -- which includes the director, associate director, assistant director, chief of nursing and the chief of staff -- obviously have knowledge of this as does the chief of Health Administration Services. Whose plan it was originally or how it was implemented, we don't know but they are fully aware of it and as the memo me states, that Ms. Helman knew that quite in advance of when Mr. Miller -- sorry, Representative Miller -- announced it in Congress.

KELLY: You know Thomas Breen who Trace reported on, he died on November 30th after having come in on an emergency basis. They didn't call his family until December 6th to say he could come back, they said he's dead. It's too late. He died screaming and crying saying, why won't anyone help me? Don't let me die. I mean, these actions have real consequences and I know now sir, you're being helpful in a criminal investigation. Is that the case?

FOOTE: Yes, but the case Mr. Breen, the ER care was excellent and the ER doctor went out of her way to take care of him and they gave him six consuls. The problem is the two that he got that he needed the most, the one to urology, and the one to primary care, to evaluate his chief complaint, a blood on his urine, those were never answered and that's what the real tragedy.

KELLY: And I know, I mean, listen, my mom worked at the VA for decades as a nurse and I know most of the staff cares deeply about veterans. This is not endemic at every VA or up and down the latter but certainly there's a problem. Doctor, thank you.

FOOTE: Thank you very much.