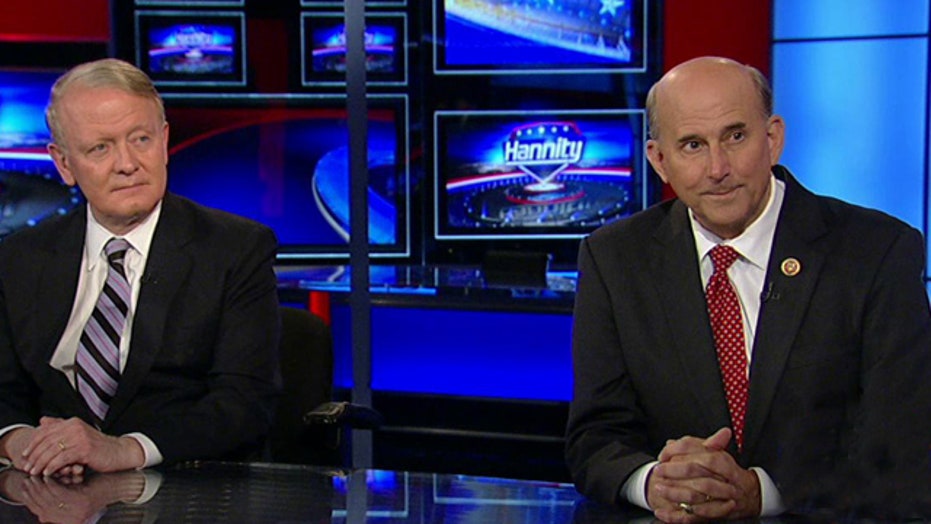 Does the Iran nuclear deal pose a threat to America?

This is a rush transcript from "Hannity," November 25, 2013. This copy may not be in its final form and may be updated.

SEAN HANNITY, HOST: And welcome to "Hannity." Tonight, the Obama White House appears to be willing to do and say anything to try and change the subject from ObamaCare. For example, instead of talking about the president's big lie that you could keep your doctor, keep your insurance plan -- well, he'd rather lecture us on immigration and even now negotiate with the terrorist regime in Iran.

But let's be honest here. Can you blame him for trying to change the subject? According to the latest poll numbers, only four out of 10 Americans actually believe the president can effectively manage the country, which is downright embarrassing. And in that very same survey, a majority of Americans -- that's 53 percent -- said he is not honest or trustworthy.

Now, stinging poll numbers are not the only thing sending the administration into a tailspin. Even ultra-liberal lawmakers like Al Franken are beginning to bail on Obamamania. According to reports, quote, "U.S. Senator Al Franken says he's open to a brief delay of the individual mandate that is at the heart of the Affordable Care Act if the federal government's health insurance marketplace is not fixed by the administration's self-imposed December 1 deadline. I think then we have to consider extending the deadline for the mandate, but let's hope that doesn't happen," said Franken when asked what happens if most of the problems with the site are not under control by then.

And let's not forget late last week, the department of HHS, headed by the disgraced Kathleen Sebelius, announced that next year, they push back the deadline for enrolling in ObamaCare, by the way, conveniently that will be after the midterm elections. Are you surprised?

HANNITY: Let's start -- I'm watching this announcement late Saturday night on this deal with Iran. And I'm thinking, why? Why does the administration trust this regime that has been fomenting terror, fighting proxy wars, and even late last week was threatening to wipe Israel off the map again?

GOHMERT: Well, that's still what they believe. And why do they trust them more? Why did the Clinton administration trust North Korea more than Republicans? I mean, it's the same kind of mentality. They think conservatives, patriots are the problem.

And if you remember, in 1994, they got a promise that in return for us giving them nuclear reactors, giving them all kinds of help with nuclear power, all they had to do was renounce nuclear weapons and...

HANNITY: They ended up getting a weapon.

HANNITY: And they extracted money, concessions every time. This game that they played, -- and they won every time.

GOHMERT: And Iran is following the exact same thing North Korea -- I think North Korea's not just helping on missiles and on nuclear weapons. They're helping them on how you game the United States. They're too stupid. They'll just -- all you got to do is promise them anything and they will help you with nuclear weapons.

HANNITY: Here's -- last week, the supreme leader of Iran actually referred to Israel as the rabid dog of the region and said the Zionist regime is doomed to destruction. When you look at the internals of this deal, what do we find? We don't have full access and inspection of every site, only the ones that they designate it's OK.

So why would America take that deal and open up billions? They now have time and money to ease the pressure and continue their program.

LANCE: Exactly, Sean. This is terrible. And I think that most Americans will be opposed to it. And not only those who serve on the Republican side in Congress, but Democratic members, as well. For example, Chuck Schumer here in New York and...

LANCE: And Senator Menendez, who chairs the Foreign Relations Committee. I think that it's terrible, and I think there will be a reaction in Congress against it.

GOHMERT: I think John Bolton has a point, though. This was about stopping Israel from defending itself. If you go back to February of 2012, this administration -- Leon Panetta told The Washington Post they're going to attack April, May or June. You don't do that to your friends. You don't betray a friend like that.

At the end of March, when they were afraid they were going to attack anyway, then they released that they're going to use Azerbaijan, so Azerbaijan had to say, "No, no, we won't allow this." We have stabbed them in the back repeatedly, again this fall, and now this is the latest...

HANNITY: So Israel is alone.

GOHMERT: Well, they're negotiating with France and Saudi Arabia. They sent a negotiator...

HANNITY: The Saudis were shocked by this. They -- they -- it took them by surprise. Now, does this start a nuclear arms race in the Middle East?

GOHMERT: Well, I can tell you, being in the Middle East back in September, we heard from some people, allies, who were saying, "We keep watching you throw your allies under the bus. And we're wondering which one of us will be next!"

HANNITY: All right, let me -- let me give you three instances. One is under President Obama, we gave the head of the Muslim Brotherhood, former head that became president, Morsi, who referred to the Israelis as descendants of apes and pigs -- we gave him F-16s, tanks and billions of dollars.

Now we have the supreme leader calling Israel their -- the doomed -- they're doomed for destruction, the rabid dog of the region. And then we had President Obama surprise them, saying, they ought to go back to '67 borders.

If you're Bibi Netanyahu and you're Israel today, what are you thinking?

LANCE: I think he's thinking that we are not as good an ally as we should be.

HANNITY: Not at all.

LANCE: And that is why Mr. Cohen, his national security adviser, is coming to the United States. And I certainly hope that the administration will consider fully the views of the Israeli government...

HANNITY: What, so we can be treated the way Netanyahu was treated at the White House?

HANNITY: All right, here's the next question. Is this -- between what happened last week in the Senate, changing the rules that have been in place all those years, and this, is this a distraction because they want to talk about anything other than the failure of ObamaCare?

GOHMERT: Well, I think they got a twofer here. First of all, you get to betray a friend you don't like, which is Israel. They repeatedly make that clear. Even though their words say, "Oh, yes, we're friends," their actions make it very clear they're not. And then, also, it is a distraction from the disaster that is and will be ObamaCare. So yes, he gets a twofer here.

HANNITY: All right, but it never ends because every week, every month, every year, cancellations, rate shock, and of course, you don't get to keep your plan. So they can't distract from this.

HANNITY: We always love having you.

GOHMERT: Love being here. Thank you.