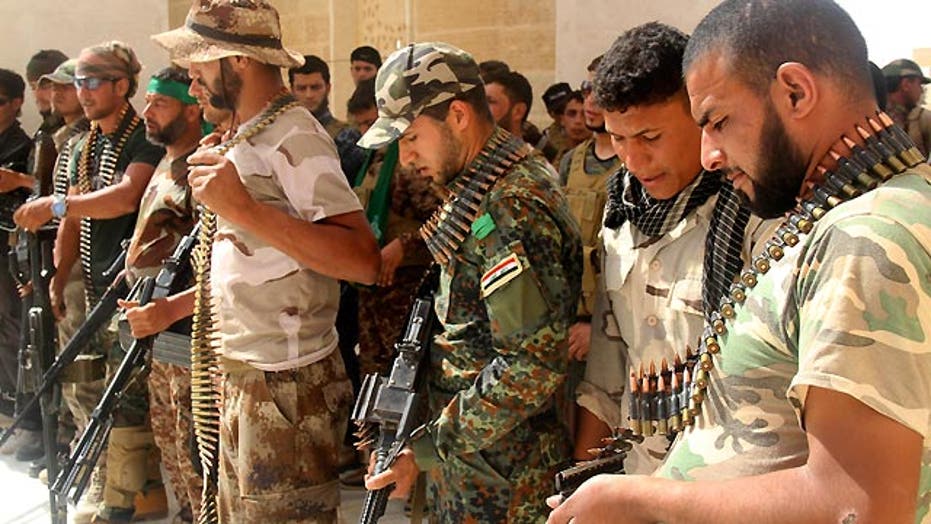 Did the Iraqis lose the will to fight ISIS?

This is a rush transcript from "Special Report," May 26, 2015. This copy may not be in its final form and may be updated.

JONATHAN KARL, ABC NEWS: Does the White House agree with that assessment?

JOSH EARNEST, WHITE HOUSE PRESS SECRETARY: Well, that certainly has been a problem that we've seen in the past. That's what allowed ISIL to make such significant gains last summer. So what the United States and our coalition has been focused on is making sure that we can enhance the capacity of the Iraqi Security Forces in supporting the Iraqi central government as they try to unite that country.

BRET BAIER, ANCHOR: Well, an attempt by White House press secretary Josh Earnest to talk about the defense secretary, Ash Carter, characterizing the Iraqi troops and the fall of Ramadi. Vice President Biden went further, calling the Iraq prime minister to say that Iraqi troops are working hard and that they're committed to the goal, but it was a bit of a cleanup effort after what was said about the Iraqi military, although many analysts say very true. It does look like they melted away in both Mosul and Ramadi. So where are we now in this fight, both the politics and the policy. We're back with our panel. Steve?

STEVE HAYES, THE WEEKLY STANDARD: Well, look, this problem has a long history here. You have to go back and remember that when the Obama administration in effect said we are out of Iraq, we are done with Iraq. We are not going to it continue to press Maliki, Prime Minister Maliki, in effect what Maliki did was clear out the Sunni leaders of the military, took various units with Sunni leadership and replaced them with Shia, Shia who were close to the political parties that are loyal to Iran.

So you, in effect, had Shiites fighting for the provincial capital Anbar province, a Sunni stronghold. It's no wonder that they didn't fight. But this is not something that happened yesterday. This is something that's happened over the years. The real question is will these new Shiite militias, the PMUs, be able to actually overtake Ramadi. I think military analysts are split on that. Some of them say that they will because they are better fighters. You can just increase the numbers. But others say that they won't and point to the difficulties that the United States had back when we were fighting in Ramadi with 20,000 troops on the ground. We didn't have success until we had 20,000 Sunnis fighting alongside us as part of the Anbar awakening, something that will not happen here. We are not going to see that here. So it's a pretty dire set of circumstances.

BAIER: Yes, to your point, General Stan McChrystal on Fox today talking about Secretary Carter's comments about the Iraqis.

GEN. STANLEY MCCHRYSTAL (RET), FORMER ISAF COMMANDER: It's pretty understandable that Iraqi forces out in Ramadi got shaken. But I don't think that's what Secretary Carter was talking about. I think Secretary Carter was talking about the will of the government of Iraq to be strong enough to show the kinds of leadership and the kinds of internal cohesion that's necessary here.

BAIER: Kirsten, we have heard the president. We have heard the secretary of state say that the Iraqis have to step up. But seeing what we are seeing, is there the sense of frustration that the U.S. has to do more, and the White House is closing the door on doing more?

KIRSTEN POWERS, USA TODAY: Yes. I think anybody watching this has to feel frustrated because it seems the answer is, if anything is going to change, Americans have to be more involved in it, and most Americans don't want that. And so we're in this catch-22 position where we look at it and say should there be even the people that are already over there, should they be, the president said they can't be in any combat role. Should they be --

POWERS: Yes, stepping into some sort of combat role. It just seems painfully obvious that nothing is going to change without that. But at the same time because we are so beleaguered about war and American people don't really want Americans being involved in another ground game in Iraq, I feel that the president's' happened are tied to a certain extent.

CHARLES KRAUTHAMMER, SYNDICATED COLUMNIST: The reason why Ramadi fell and why Anbar has fallen is because the Sunnis have correctly interpreted the actions of a government, first Maliki and now the new prime minister, as being highly sectarian. And in having to choose between ISIS and an Iraqi government that persecutes and goes after Sunnis, it's been a tough choice. Some have gone one way, some the other.

To me the big mistake in our policy is trusting the Iraqi government and what's known as the Iraqi army, as Steve indicates, hallowed out and corrupted when all the Shiites were expelled -- all the Sunnis, sorry, were expelled and replaced by cronies of the government and henchmen of Iran. That army is not going to fight. What Carter said is exactly right. It had no will and ran away. The question is, why are we still supplying the friends that we have in Anbar, the Sunnis, through Baghdad, which is now a wholly owned subsidiary of Iran, central government will not arm them, and that's the problem. If we had people there who are sympathetic to our cause who got a directed shipment of arms, and as I said the other night, and like the Kurds also in the north, we would have a chance. Otherwise, we will have what we have now, a self-declared sectarian war. When the government announced the name of the operation for recapturing Ramadi, mentioning the name of the Shiite martyr that started the sectarian split 1,400 years ago, that was announcement this is a religious war, Iranian surrogates, Shiites against Sunnis. That's a war where we can't win no matter who wins.

BAIER: And just on the point about providing weapons, weapons to the Kurds, who are the big fighters in the north, are still to this day going through Baghdad, a Baghdad that moved equipment to Ramadi and then ran away from it so now it's in the hands of ISIS.

HAYES: It makes absolutely no sense. The Kurds understand the predicament. That's why they are begging us for these weapons. It makes sense to supply them directly to the Kurds, and I would argue directly to the few remaining Sunni tribesmen that we have alliances with going back to the Anbar awakening in 2006 and 2007.

KRAUTHAMMER: It's the Kurds. It's the few Sunnis who support us. It's the Ukrainians. It isn't a matter of American boots on the ground. Why aren't we supplying these people with the weapons they need and they are begging us for? The administration has never answered that.

BAIER: That is it for the panel. But stay tuned to see who may be tired of politics.