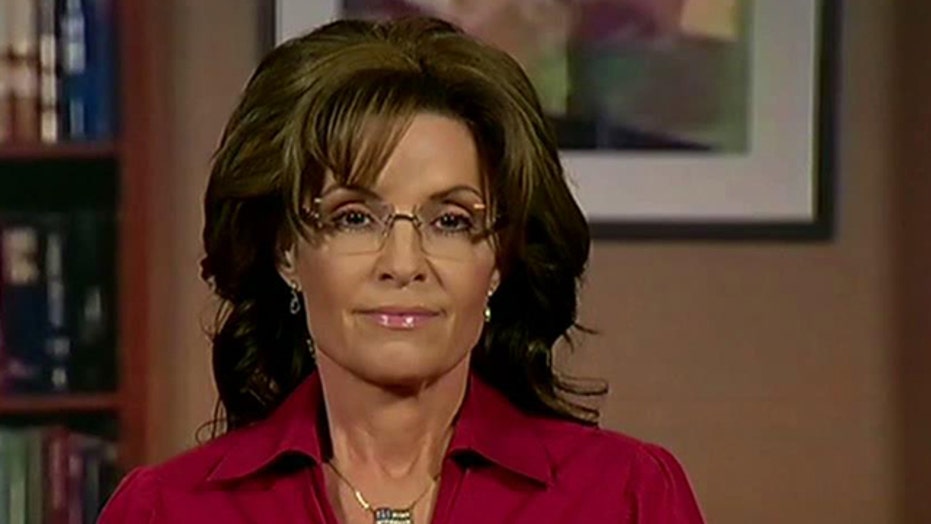 Did Sarah Palin predict the Ukraine crisis back in 2008?

This is a rush transcript from "Hannity," March 3, 2014. This copy may not be in its final form and may be updated.

SEAN HANNITY, HOST: My next guest predicted that this would happen way back in 2008. But liberals and Democrats -- they laughed it off. You may remember this.

SARAH PALIN, FORMER ALASKA GOVERNOR: After the Russian army invaded the nation of Georgia, Senator Obama's reaction was one of indecision and moral equivalence, the kind of response that would only encourage Russia's Putin to invade Ukraine next.

HANNITY: All right, joining me now, former Alaska governor, Fox News contributor Sarah Palin. Governor, before I get to you were right and they were wrong, let's show back, four years later, after you made that prediction, there was a final debate on foreign policy, and this was the exchange between Governor Romney and President Obama.

PRESIDENT BARACK OBAMA: When you were asked what's the biggest geopolitical threat facing America, you said Russia, not al Qaeda, you said Russia. And the 1980s are now calling to ask for their foreign policy back because, you know, the cold war's been over for 20 years.

ROMNEY: Excuse me -- it's a geopolitical foe, and I said in the same -- in the same paragraph, I said, and Iran is the greatest national security threat we face. Russia does continue to battle us in the U.N. time and time again. I have clear eyes on this. I'm not going to wear rose-colored glasses when it comes to Russia or Mr. Putin.

HANNITY: Governor, you predicted this with pinpoint accuracy back in 2008. People laughed at it. Governor Romney was right in 2012. What did you guys see that Obama refused to see?

PALIN: Well, anyone who carries the common sense gene would know that Putin doesn't change his stripes. He hearkens back to the era of the czars, and he wants that Russian empire to grow again. He wants to exert huge power and dominance. So he has to get to those border areas and he has to capture them.

But you know what, Sean? More importantly, we were right on that, I'm right when I talk about that inherent link between energy and security, energy and prosperity. And when we don't develop our resources and when we are not able to feed others with our resources, and so many others are reliant upon Russia, who does develop their resources, and with that wealth are able to strengthen their military and their influence and power on the globe, then other nations are in trouble.

HANNITY: Well, it's interesting you say that. K.T. McFarland, I thought, had four great suggestions -- one, the Keystone pipeline, two, Obama should reverse course, move forward with fracking, horizontal drilling, also that Obama should send a delegation to Poland, the Czech Republic, central Europe and should help them develop fracking techniques. Because isn't a big part of this equation is Europe is rendered impotent because 18 pipelines run right through the Ukraine and now Vladimir Putin has control of that, right?

PALIN: Right. See, in that building of pipelines is an example of developing natural resources and what they can provide to a region. And here today, was it in Washington, D.C., we had all these protesters against the Keystone pipeline.

Look, America needs pipelines. Just like other parts of the globe that we were just talking about need their pipelines, we need ours. And those protesters griping about, oh, I don't know, perhaps an earthworm will be displaced when a pipeline is built in America -- that earthworm, it can take one for the team.

HANNITY: Yes. All right. But all right, so you were worried after Georgia that this would happen in the Ukraine. And we now are watching what's happening in Crimea. Are you concerned this goes further, that his ambitions are much bigger than even the Crimean area?

PALIN: Well, yes, especially under the commander-in-chief that we have today, because Obama's -- the perception of him and his potency across the world is one of such weakness. And you know, lookit, (ph) people are looking at Putin as one who wrestles bears and drills for oil. They look at our president as one who wears mom jeans and equivocates and bloviates. We are not exercising that peace through strength that only can be brought to you courtesy of the red, white and blue, that only a strengthened United States military can do.

HANNITY: Yes. All right, let me move on. Let me play a montage, because the president made a big deal about the so-called reset. John Kerry was also asked about it over the weekend. But here's a little montage going from 2009 through Kerry's, I think, pretty disastrous interview yesterday. Take a watch (ph).

HILLARY CLINTON, SECRETARY OF STATE, MARCH 6, 2009: We want to reset our relationship.

CLINTON: So we will do it together.

OBAMA, NOV. 15, 2009: I am somebody who genuinely believes that the reset button has worked and that we are moving in a good direction.

DAVID GREGORY, HOST, "MEET THE PRESS"/NBC, MARCH 2: Marco Rubio is on this program in just a few minutes as saying it's time for the administration to publicly acknowledge that the reset with Russia is dead. Do you acknowledge that?

JOHN KERRY, SECRETARY OF STATE: Well, I don't know what you mean by the reset.

GREGORY: The reset in relations that this administration called for.

KERRY: No, I know. I know. I know, but long ago, we've entered into a different phase with Russia. I don't think this is a moment to be proclaiming one thing or the other.

So has this turned out to be a failure? And what do you think the long-term ramifications are if you do think it's a failure?

PALIN: Yes, that reset button thing, that was, you know, just more -- more political speak and doublespeak that is so prevalent in the Obama administration.

No, Obama instead has chosen to adopt this MO of leading from behind, whatever the heck that means, I mean, because the rest of the world looking for that shining city on a hill, looking for that country in which -- that they can emulate -- they're not seeing that anymore in America because of Obama's weak leadership, leading from behind, which makes absolutely no sense.

What's going on in a greater sense here is other countries finally taking advantage of that weakness in America at this point, because our commander-in-chief does not understand the peace through strength that so many of us want to get back to. That is the only way that our world will be safer, more secure.

HANNITY: Well, if you go back to what Chuck Hagel said, that the era that America is going to lead in the sea and air and in space -- that that era is gone -- he said that when (ph) we're (ph) cutting troops -- last question, if I can. China now has created this alliance, and they support what Putin is doing. They have their own territorial ambitions.

Do you think that means, Well, we'll support your territorial takeovers, you support ours? Is it potential to do that?

PALIN: It is, and a lot of that has to do with that linkage for energy resources that China so needs.

Look, my last point is, when Putin now is being accused by critics of violating law in his actions today -- well, I'm loathed to give any advice to a tyrant like Putin. But you know what he could do, is what liberals adopt here in America as acceptable, and that is when our president decides which laws picking and choosing that he will follow, he can just call it an executive order and nobody says boo.

HANNITY: All right, Governor Palin, you were right in 2008. Wish people had listened to you. Thank you so much. I'm waiting for the media to apologize to you. I guess I shouldn't hold my breath.

All right, thank you for being with us.