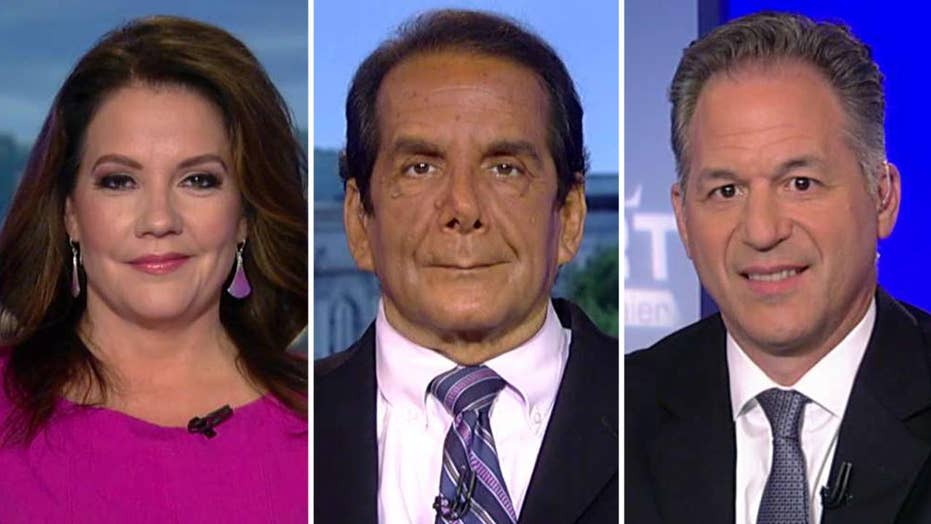 This is a rush transcript from "Special Report with Bret Baier," July 24, 2017. This copy may not be in its final form and may be updated.

JARED KUSHNER, SENIOR PRESIDENTIAL ADVISER: Let me be very clear. I did not collude with Russia, nor do I know of anyone else in the campaign who did so. I had no improper contacts. I have not relied on Russian funds for my businesses. And I have been fully transparent in providing all requested information. Donald Trump had a better message and ran a smarter campaign, and that is why he won. Suggesting otherwise ridicules those who voted for him.

BRET BAIER, ANCHOR: You don't often hear from Jared Kushner but he was speaking to reporters outside the White House today after talking behind closed doors to the Senate Intelligence Committee. He will do so with the House Intelligence Committee tomorrow. His father-in-law and the man he works for as a senior advisor tweeted yesterday "As the phony Russian witch hunt continues, two groups are laughing at this excuse for a lost election taking hold, Democrats and Russians!" "Drain the swamp should be changed to drain the sewer." You heard that in his Boy Scouts speech just moments ago. "It's actually much worse than anyone ever thought. It begins with the fake news! And so why aren't the committees, investigators, and of course our beleaguered A.G.," attorney general, "looking into crooked Hillary's crimes and Russia relations?"

MOLLIE HEMINGWAY, THE FEDERALIST: I thought the most interesting thing that Kushner said was right there at the end when he said that this Russia conspiracy storyline that is being pushed ridicules Trump voters and makes it seem like they didn't know what they were voting for. I think this was a good day for Jared Kushner. It's a good day for people who don't think there's a lot to this Russia conspiracy story. And it was not what we might've anticipated a couple weeks ago when news first broke of that meeting.

There's also another thing, though, which is that obviously Jared Kushner is not ground zero of the Russia conspiracy, but if people are interested in Russian meddling in the election, I think they need to start looking at Fusion GPS, which is the Democratic opposition research firm that's run by a bunch of former "Wall Street Journal" reporters who were behind the dossier, they had ties to this meeting, they were running interference for the company that was involved in the sanctions. There still is stuff to explore.

BAIER: And he is not going to testify. He is taking the fifth, I guess.

HEMINGWAY: He actually just told the bipartisan Senate Intelligence Committee that he will refuse to answer questions about his dealings with Russia, so this could heat up.

BAIER: Chuck, also the president tweeted today, "After one year of investigation, zero evidence being found, Chuck Schumer just stated that the Democrats should blame ourselves, not Russia." He's referring to the Senate minority leader talking to The Washington Post, saying "When you lose to somebody who has 40 percent popularity, you don't blame other things, Comey, Russia. You blame yourself. So what did we do wrong? People didn't know what we stood for, just that we were against Trump, and still believe that." That was quite a statement that he got reiterated today in this Democratic rollout of a new message.

CHARLES LANE, THE WASHINGTON POST: Chuck Schumer is saying public there something a lot of Democrats say privately and have been saying privately ever since they lost the election. The more forthright of them, the Democrats should never have lost this election to somebody like Donald Trump. But for many reasons, many of which were their own fault, they did.

And so now what's happening is in the middle of this scandal or whatever it is about Russia, some of these senior people in the party and their pollsters and focus group people are getting together and trying to learn some lessons from that and pivot to a positive message aiming toward winning back some seats in November of 2018. Perhaps the bad news from their point of view is what they actually produced today was pretty tentative, and talked about things that are very familiar -- infrastructure, minimum wage, nothing really very new. And I thought it was interesting there was nothing in it about trade. Obviously that's an issue that divides the party because Bernie Sanders has a position almost like Donald Trump, but Hillary, of course, was more of a free trader, and they haven't resolved that internally. So here's this huge issue that really played favorably for Trump in the election and they haven't reformulated it.

BAIER: It still splits the party. Elizabeth Warren, Bernie Sanders, others siding almost with Donald Trump. Your thoughts back on Jared Kushner and the detailed statement he puts out. Brit referenced it earlier, saying that if you're going to do that, you have to be pretty solid on what your putting out there.

CHARLES KRAUTHAMMER, SYNDICATED COLUMNIST: I thought it was a very effective statement. His defense essentially is that I was a naive, inexperienced, careless at times, clueless at times, rookie in all of this. And to me it rings true. It's not the greatest of defenses, not exactly the one you want to go to, but you have to in this case. And I think he comes out as a guy who's being fairly open about what he did.

There are a few phrases in there that are very lawyerly, like I never relied on Russian funds in my business. "Rely" is an interesting word, implying there might have been loans or other stuff we don't know about. But overall, I thought it was a good statement, and it looks like he's clean.

The only reason possibly for Trump to refer to the A.G. the way he did is that he wants his resignation. And it seems to me he will get it fairly soon.

BAIER: It doesn't -- there was a rumor that the president wanted Rudy Giuliani and that he was considering him again. Giuliani said that that's not true. And Sessions says he's planning on staying on. Mollie, I just want to go back to the Democrats and the rephrasing of this rollout and what do you think that means.

HEMINGWAY: I think it showed that they really do understand they have a problem with working class voters. For a lot of people in their minds when they think of the Democratic Party, they are thinking of fringe elements, the pink hats at the women's march or rioters in the street, and that's not very attractive to a lot of middle American voters who were persuaded by Trump.

At the same time I think they need to have a much stronger message than what they put out. It sort of compares unfavorably to what Donald Trump is already doing with his strong defense of America and the average American worker. But it is suggesting they see they need to fix things.