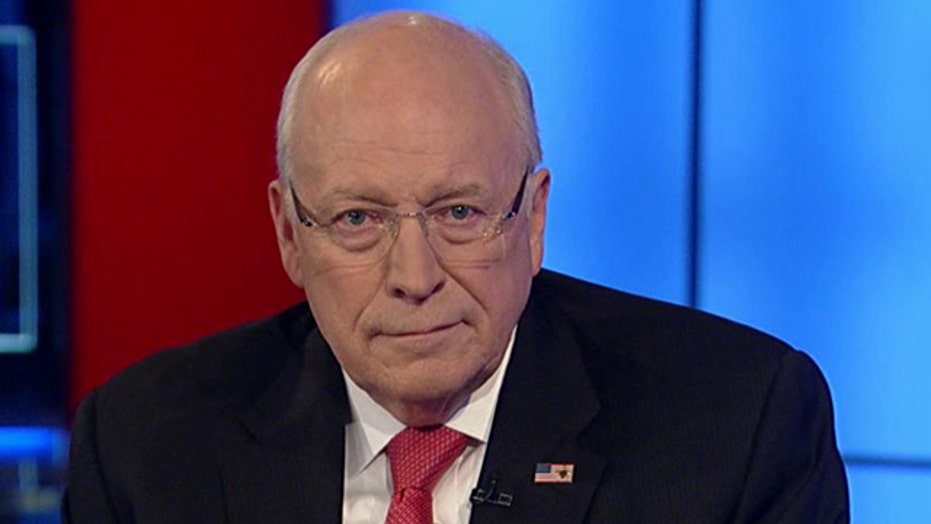 Dick Cheney sounds off about Obama's handling of Iraq

This is a rush transcript from "Hannity," June 24, 2014. This copy may not be in its final form and may be updated.

SEAN HANNITY, HOST: With Islamic militants leaving a bloody trail all across Iraq as they march towards Baghdad -- well, yesterday, your fearless leader, President Obama, appeared on NBC News and declared that just because over the past few years Iraq was stable -- well, things change. It's not his fault. Nothing's his fault. Take a look.

PRESIDENT BARACK OBAMA: Just because something's stable two years ago or four years ago doesn't mean that it's stable right now. And what we have is a situation in which, in part because of growing mistrust between Sunni and Shia some of the forces that have always possibly pulled Iraq apart are stronger now. Those forces that could keep the country united are weaker.

HANNITY: All right, here with reaction, a special in-studio appearance, former vice president of the United States Dick Cheney. Mr. Vice President, how are you? Good to see you.

HANNITY: All right, so all of the blood, the sweat, the tears, the sacrifice, the surge -- all of this goes into getting Iraq, not a perfect democracy, certainly better off than it was.

HANNITY: And an ally in the region of the United States. You see now city after city falling. The president says he's not responsible. I would assume you don't agree with that.

CHENEY: Well, I don't. And partly, I think it's important to understand this isn't just about Iraq. One of the things we have going for us now, going under these circumstances, not going for us, is that it's part of a much larger problem.

We just had the Rand Corporation produce a report within the last couple of weeks that showed there's been a 58 percent increase in the number of Salafi jihadist terrorist organizations over the course of the last four years -- four years, 58 percent increase. They're up now to some 60, based on their count. We've had a doubling of the number of so-called terrorists, members, individual members of that organization, or those organizations. Doesn't say they're all al Qaeda, but they're all basically terrorist organizations with a similar philosophy, and it's growing by leaps and bounds.

So it's not just about Iraq, it's the fact that now Iraq and Syria are both potential trouble spots. And as we see this proliferation of terrorists, we've also at the same time had an administration that didn't want to recognize there was a problem. They liked to say, well, we got the bin Laden, problem solved. Or we've decimated al Qaeda. What they've decimated is the U.S. Defense Department.

HANNITY: I try to put myself in the position of maybe an Iraq war vet who came back and had lost a leg, or maybe parents in some state around the country, and you met many of them...

HANNITY: ... that lost a loved one. And the cities that their sons died in, or where they lost a limb -- they're watching those cities fall to ISIS right now before their very eyes! And I got to be wondering, what are they thinking tonight after their sacrifice?

CHENEY: Well, they've got to be very -- very, very upset, obviously, and concerned about it, without question. I mean, the fact was, when we left, Iraq was in pretty good shape. We'd had the surge in '07 and '08. That had had a dramatic impact. We had a significant reduction in the level of violence. The Sunnis came on board as a result of the awakening out in Anbar province. They were fighting side by side with our guys. And we had the situation pretty well squared away when we departed. The understanding was that there would be a stay-behind force, that there'd be an agreement to leave some troops behind to handle intelligence and logistics...

CHENEY: ... and air support -- training. But my understanding of what transpired then was the military, the Pentagon, came in with a number of 18,000 to 20,000. The White House said no. They came back at 10,000, and the White House said no again. They ended up down at about 3,000 or 3,500, and then failed to get the stay-behind agreement to leave anything there.

Net result was over two-and-a-half years without any kind of advisers operating at all, then when ISIS or...

CHENEY: ... the Iraqi military just collapsed. They didn't have the kind of leadership, partly because Maliki had purged some of the Sunnis out of the force. So we've now got a terrible, difficult situation on our hands, but I think it's primarily because of both Maliki and Obama.

HANNITY: If President Obama had left behind just enough troops to provide the logistics, the training, the intelligence, we wouldn't be where we are today.

CHENEY: I think that's an accurate statement, and I think that part of his problem is -- my own personal belief, obviously -- we're not close -- but that he...

HANNITY: He doesn't call you for advice?

CHENEY: I'm sure I will.

But the big problem is that you end up with a situation where I don't think he wanted to have troops behind. I think he wanted to be able to say, as he did during the campaign, he didn't want any U.S. servicemen in Iraq. He wanted to pull everybody out. The thing I'm worried about now is he's talking the same way about Afghanistan that he did about Iraq.

HANNITY: So the question is, with Syria and Iraq and ISIS, or ISIS, whatever you want to call it, now I'm worried about Jordan, which has to be nervous. You've got this, you know, Syrian/Iraq line here, where the terrorists basically keep expanding their reach -- Lebanon, Jordan, Turkey. What do we do now? Is there any way to save Iraq? Is there any way to -- I mean, at this point, are we going to have to shed more blood? Do you support air strikes? What would be the best thing to do?

CHENEY: I think the best thing to do, first of all, is to recognize that the administration's policy that are in place with respect to defense, with respect to recognizing there is a problem, or terrorist concern -- is to reverse course on the defense budget. We ought to use this excuse -- not that we need an excuse, but this specific situation in order to turn things around at the Department of Defense.

They've now moved towards fighting a one-war strategy we've always operated in the past and we needed (INAUDIBLE) forces to fight two wars.

CHENEY: Taking the Army down below pre-Pearl Harbor levels. We've got only four active duty brigades that are combat-ready out of the 40 in the United States Army. All those things need to be reversed. Quit talking about further withdrawals from the Middle East. We've created a vacuum out there now, and it's being filled by the likes of al Qaeda or wannabes like ISIS. So there are major steps we could take right away to recognize this is part of a larger problem.

HANNITY: But this was a president that went to Cairo. This is a president that went on an apology tour, who said he was uniquely qualified, based on his experience in the Muslim world, to unite the West and the Islamic world. You said in an earlier interview today, I think it was on Rush's program or Hugh Hewitt's program, that an attack on this country far deadlier than 911 is going to happen within a decade.

CHENEY: He asked me if that would happen by the end of the decade, and I said I was afraid yes.

CHENEY: On 9/11, obviously, it was terrible. Right here in New York City, we lost the World Trade Center. The Pentagon was badly hit, 3,000 people killed, a worse attack than Pearl Harbor.

What we're faced with now, though -- remember, all they had were airline tickets and box cutters -- is that as we've seen this proliferation of terrorist organizations, there's also the problem of proliferating nuclear capability. We've now got the terrorist Taliban organization in Pakistan conducting a big raid on Karachi airport. Why do we care about Pakistan? Well, they have 50 to 100 nukes.

CHENEY: And if you combing the terrorists with the ability to get their hands on a weapon of some kind, then obviously, we're going to see a very...

HANNITY: It almost seems like -- and maybe I'm reading into what you're saying -- that if we don't get real about the rise and the march of radical Islam right now, that literally, we face the potential of a human catastrophe on a scale that we've not seen before. Am I reading into that?

CHENEY: I think that's an accurate statement. I think that threat will increase dramatically, and as -- well, we already know, for example, from A.Q. Khan, the man who put together the Pakistan nuclear program, and then was under house arrest because he was selling stuff to the Libyans -- he has said publicly in the press a couple of years ago that the Pakistanis sold nuclear technology to the North Koreans. We know the North Koreans built a reactor for the Syrians, which was taken out by the Israelis back in '07.

So there's a network developing there, where access to that kind of technology obviously becomes increasingly problematic. On top of that, we've got Iran trying to build a nuke -- a nuclear program...

HANNITY: I see the -- I see the world the way you do. I view this as a real clear and present danger...

HANNITY: ... almost the potential for a modern-day Holocaust that we've not seen, maybe in your grandkids' lives or my kids' lives. Pretty scary stuff.

CHENEY: It is scary stuff.

HANNITY: It is scary.