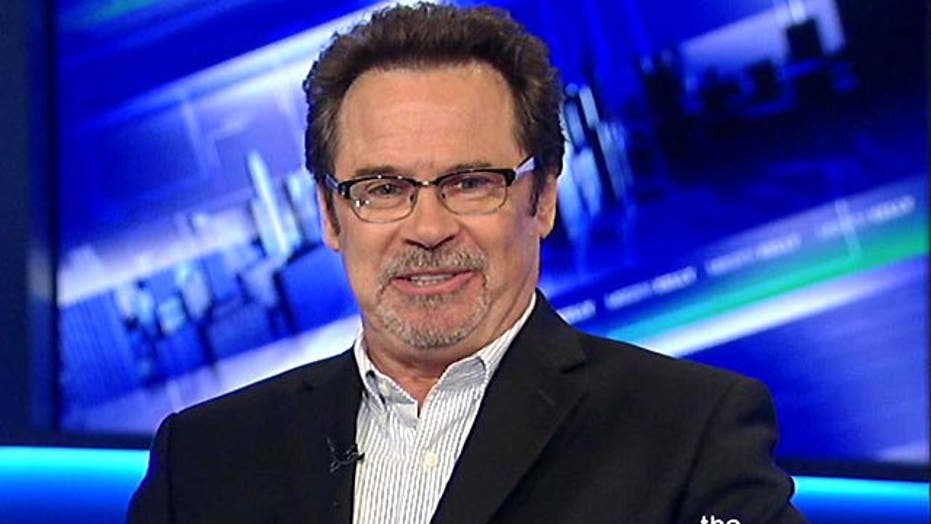 Dennis Miller on what's going on with America

This is a rush transcript from "The Kelly File," June 6, 2014. This copy may not be in its final form and may be updated.

MEGYN KELLY, HOST: In a year mark with commencement controversies comes one more tonight. Actress Jane Fonda said to give the keynote speech this month at the UCLA School of Theatre Film And Television. And that is getting some angry reaction from veterans across the country. Earlier this week I sat down with radio talk show host and comedian Dennis Miller for his reaction to that and so much more.

KELLY: Can we say it's Miller Time or is that just between you and O'Reilly?

KELLY: He gets very upset when you feel things like ‘The Kelly File.'

KELLY: So, do you know Jane Fonda? Do you circulate in the same circle?

MILLER: She was a great Barbarella.

KELLY: Oh, but then things went.

MILLER: I think she made big errors when she quit being Barbarella. It made sense to me then.

MILLER: Listen, the thing about Jane is and I don't know but from a far I would say this, any time a woman says she's a strong woman and I see her parroting the moves of her old man all the time. Like for instance, she's married to Roger Vadim she's a table top dancer at the Hotel Du Cap. And she goes and marries Tom Hayden, she's sitting on a gun tart. Then she marries Ted Turner, I'd actually see her with one of those chopped things on her hand at the Atlanta Brave game. I'm thinking he's strong man or whatever your old man is into you're into. Gets a little tedious. You know, I just -- to me strong women, you know, when Ted Turner says honey, I want you to come down and wear a ball cap and put a big foam finger on your hand and do the chop. You go, what are you nuts? I'm Ted Turner, you go eat the buffalo. I'm Jane Fonda, you're Ted Turner you go lead the buffalo eating burger life. Don't be an idiot, I'm a star.

KELLY: She's not beloved by the large portion of Americans veterans.

MILLER: She has to understand that.

KELLY: But the question is, does UCLA understand that because we've been talking about these, they didn't want Condoleezza Rice what was it at Rutgers. They don't want Ayaan Hirsi Ali at Bradeis

MILLER: Yeah, got to think somebody come out against mandated clitorectomies and force marriage for 12 year old. That rabble-rouser.

KELLY: That's too much. But Jane Fonda will like to be able to speak?

MILLER: The only way she'll be kicked out in UCLA is if their find out in the movie Klute where she played a hooker, one of her John's was a rich Arab then Ibraham Hooper in the morons from the Care Bears will cab in and start whining that it's a bad depiction of Arabs. That's how crazy the world has got. If Ibraham Hooper comes in.

KELLY: In any event, let me ask you this because in the news lately, has been this Bowe Bergdahl prisoner swap.

MILLER: Yeah. I was watching your show last night. Watching at the end and I'm thinking yeah, that's the problem. I actually forget the guy was saying you were nice to him. Doug, thank you for you're always so nice. And I'm sitting home thinking why don't you light Doug up. I got this moron saying the problem is Gitmo. Yeah, that's the problem. They're all cooled out over there. That part of the world is never been uptight. You know, out come in (ph) the simplest answer is the right answer. You know why they're nuts in the Middle East? They are nuts. OK? It wasn't like they were cool all along and we opened Gitmo and they said my god there is a prison. They're nuts.

MILLER: And you know what, I would do, I'd shave all those guys. You know, I see that picture of them and I look at it and I go, here, our guy Daniel Pearl gets taken, they cut his head off on videotape. And then they talk about being a nation of peace. We get them down at Gitmo, they all look like they're 235 pounds.

KELLY: And they've got big soccer fields to play on.

MILLER: And I'm just thinking, you know, I went to Gitmo once. I flew in, and get all these overweight guy's shirtless playing soccer out on the field. I think, for God's sakes, our soldiers are bust in their ass protecting these morons. You know, and these guys are out there playing soccer and getting fat.

KELLY: If you love Dennis Miller and who doesn't, is it an hour of you straight a full hour?

KELLY: I know, look at Luke, look at his muscles.

MILLLER: What are we doing? We're on the subway train in French connection.

MILLER: Look at the guys laughing, looks like Mr. Peanut's head. You put a top hat on that on.

KELLY: That's my favorite part of the show. He's really my co-host.

KELLY: So, listen, you do a full hour is it by yourself or is O'Reilly going in on this?

MILLER: No, it's by myself.

KELLY: This is all you all the time.

MILLER: At the end, I close out O'Reilly and I sing Sisters from White Christmas.

KELLY: Great number. We'll have to dub that in.

UNIDENTIFIED FEMALE: Sisters, sisters, there were never such devoted sisters.

KELLY: So, what's the story? June 13 that's next Friday. Stand-up comedy TV special. You're just gonna be sort of doing your.

MILLER: It's called ‘America 180.' It's about how the country doesn't makes sense to me anymore. That seems like common sense is harassing now.

We've gotten so smart we don't even use our heads anymore.

KELLY: Does it bother you though? A wise man I know here at FNC once told me when you get older you're give a blank meter just changes. Like you care less.

MILLER: You know, I'm not ancient but I am 60 now and I don't really care if I'm thought of as an outlier. I just, I have to call BS on certain things.

KELLY: And call BS you shall. The stand-up comedy TV special premiering June 13th at 8:00 p.m.

MILLER: You watch Sebelius will take on the Veterans Administration.

That how crazy the country is.

MILLER: Good to see you.