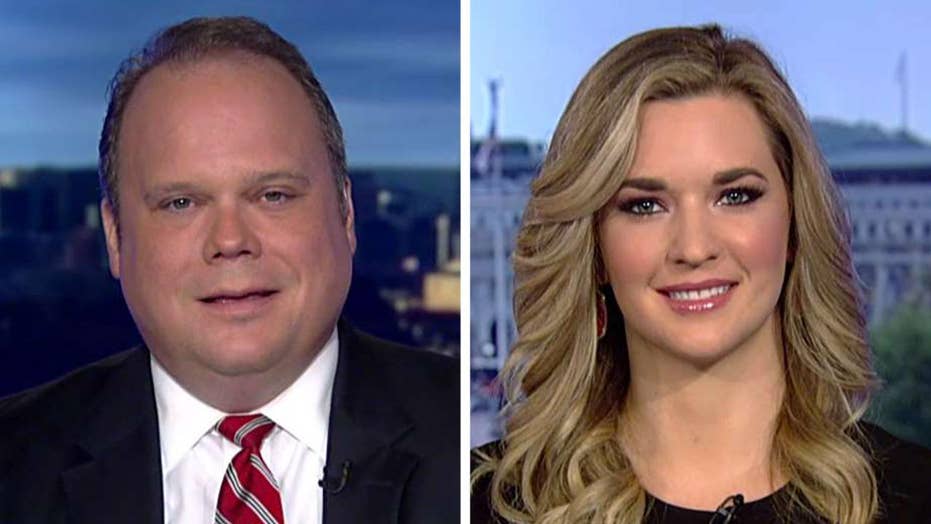 This is a rush transcript from "Special Report with Bret Baier," September 23, 2019. This copy may not be in its final form and may be updated.

JOE BIDEN, DEMOCRATIC PRESIDENTIAL CANDIDATE: I've never spoken to my son about it. I know Trump deserves to be investigated. He is violating every basic norm of a president. You should be asking him the question, why is he on the phone with a foreign leader, trying to intimidate a foreign leader, if that's what happened.

We had a perfect phone call with the president of Ukraine. Everybody knows it. It's just a Democrat witch hunt, here we go again.

BRET BAIER, ANCHOR: President Trump dealing with this phone call, the focus of a lot of questions. We don't know what was said specifically, we haven't seen the transcript or the complaint by this whistleblower. The president turning to Joe Biden and his son Hunter Biden and their activities in Ukraine.

Biden describing going there and getting rid of a prosecutor. Take a listen.

BIDEN: He got fired.

BAIER: The New York Times had a big story about the connections here. This is a follow-up this Sunday, "Hunter Biden has not been accused of legal wrongdoing related to his work for Burisma," this oil company, "which paid him as much is $50,000 per month in some months for his service on the board of directors. Starting in 2012, Mr. Zlochevsky," which is the Ukrainian oligarch, "has faced a long series of accusations of money laundering and tax evasion." He's the owner of that company, Burisma. "When Hunter Biden joined the board of Burisma, he had no experience in Ukraine. He has a professional history, including a number of roles that intersected with his father's political career. Did Joe Biden's push to remove the prosecutor help Hunter Biden's employer? Mr. Zlochevsky allies were relieved by the dismissal of" the prosecutor, "Mr. Shokin, "the prosecutor whose ouster Mr. Biden had sought according to people familiar with the situation. Mr. Shokin was not aggressively pursuing investigations into Mr. Zlochevsky or Burisma, but the oligarch's allies say Mr. Shokin was using the threat of prosecution to try to solicit bribes from Mr. Zlochevsky and his team, and that left the oligarch's team leery of dealing with the prosecutor."

I wanted to take some time and read from The New York Times, fact-checking on all of this this weekend. Let's bring in our panel: Chris Stirewalt is politics editor here at Fox News; Susan Page, Washington bureau chief at USA Today, and Katie Pavlich, news editor at Townhall.com.

There are kind of two pieces to this, the president pushing back hard today, Susan, on this phone call.

SUSAN PAGE, USA TODAY: That's right. There is a move now, the president suggested maybe he will release the transcript of the phone call. I think there's some good reasons why he shouldn't do that.

BAIER: Being that foreign leaders --

PAGE: Foreign leaders should expect to have a confidential conversation with the president. He has less of a defense when it comes to not sending to Congress for congressional oversight the whistleblower's complaint, that the law says that if it's credible and urgent, which the inspector general for the intelligence community has said, it needs to go to the Congress.

And if that doesn't happen on Thursday when the acting director of national intelligence is scheduled to testify before Congress, we are going to have a real conflict.

BAIER: And this is starting the impeachment talk again. Here's the president and Adam Schiff.

UNIDENTIFIED FEMALE: How seriously are you taking these --

TRUMP: Not at all seriously.

REP. ADAM SCHIFF, D-CALIF.: This would be an extraordinary remedy, a remedy of last resort, not first resort. But if the president is essentially withholding military aid at the same time that he is trying to browbeat a foreign leader into doing something illicit, that is providing dirt on his opponent during a presidential campaign, then that may be the only remedy that is coequal to the evil that conduct represents, and we may very well have crossed the Rubicon here.

CHRIS STIREWALT, FOX NEWS POLITICAL EDITOR: Evil. The president is making it really hard on Democrats who don't want to impeach him. They want to have impeachment-light, they want to have movement so they can say to their base, yes, we care, we're engaged. He's making a pretty hard on them because this is -- if this is so, if this is true, if the president used his office to coerce a foreign leader into getting dirt on his political rival for domestic political purposes, that's a stinker, that's a big problem. And it makes it harder for Nancy Pelosi and her leadership team to push back on Democrats who want to go now.

BAIER: The president said probably three times today no quid pro quo, I hope you see the transcript. He's pointing to the Bidens and what did or didn't happen with them. You heard the former vice president say he had never talked to Hunter Biden. Hunter Biden in a "New Yorker" piece is quoted as saying that he did discuss Burisma with his father and what he was doing there.

KATIE PAVLICH, TOWNHALL.COM: Politicians using words like never usually don't pan out for them in the long run, and he will probably have to walk that back when it comes to more investigation into this.

But we're in a bit of a situation of playing telephone here. We now know according to FOX News reporting that the whistleblower in question didn't actually see or hear this conversation take place firsthand. So my question is now, OK, well, the person who told the whistleblower, who did see it allegedly, are they then going to come forward? The fact is that we don't have enough information to make a decision.

Chuck Grassley, who used to be the chairman of the Judiciary Committee, today who spent an entire career protecting whistleblowers and passing new laws that give them extra protections when they want to come forward and expose things so that national security is not put at risk, he came out today saying, look, we don't have all of the facts. There's been a lot of speculation about the story and also a lot of speculation with the Russia situation as well. We don't want to go back down that road. Should the I.G. recommendation be denied in the future? No, that's not something we should be doing as a precedent here, but we do want to make sure that we are protecting national security and not getting into a political argument of this.

And just one more thing. When it comes to credibility here, Adam Schiff has a lot less credibility then Donald Trump when it comes to the accusations that he's been making for the past two years that never came true about evidence hiding in plain sight, about the president colluding with the Russians, then the Mueller probe completely blowing all of his accusations out of the water.

BAIER: So what about that? Is there a danger on that side, Susan, for Democrats as they kind of go down this path, it seems more and more of them are, as Chris mentioned, getting closer to launching impeachment proceedings.

PAGE: I think we are hearing a little more of that. Adam Schiff was an important voice yesterday saying he may be changing his mind on impeachment. That's important because he's the chairman of the Intelligence Committee, because he's close to Nancy Oelosi. But they're not there yet.

And I think they look at -- one of the problems that Democrats have now is they don't actually need the whistleblower complaint, although the law says the whistleblower complaint is supposed to go to Congress, and they don't need the transcript. They have the president of United States and his personal attorney saying that they raised these issues with the new president of Ukraine, urging him to investigate the president's political rival here, and that in itself is a really serious question that shouldn't be lost with this debate over exactly what information is going to come forward.

BAIER: What we're going to say?

BAIER: There is a shift in the force on Twitter and elsewhere where the focus is less on the phone call and more on what Rudy Giuliani did in Ukraine, suggesting that maybe -- who knows, if the phone call comes out or not.

I do want to point out one of other thing that happened and largely was overlooked over the weekend.

NARENDRA MODI, INDIAN PRIME MINISTER: You can hear the heartbeat of this great partnership in the celebration of the world's two largest democracies.

TRUMP: The ties between our two nations are grounded in our common values and our shared commitment to democracy. We are free nations with great faith and a fierce devotion to our national independence.

BAIER: There were some soundbites from the prime minister.