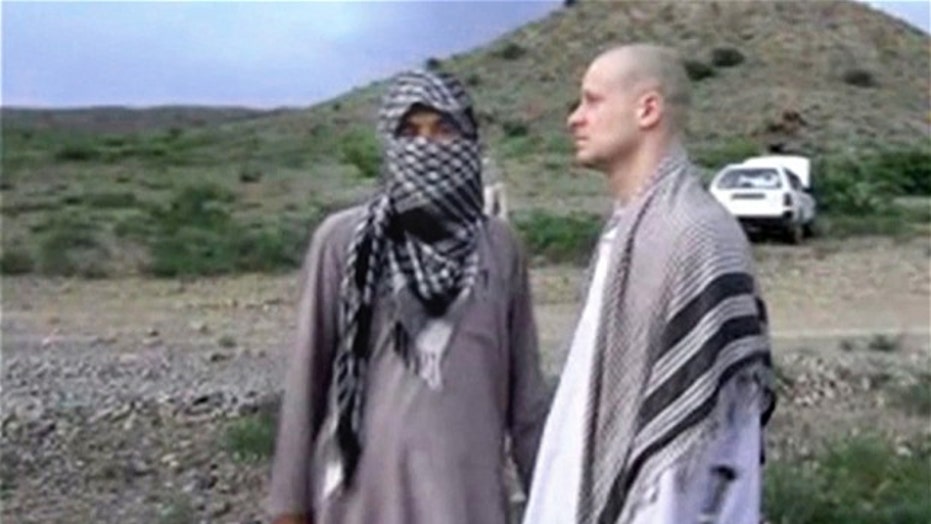 Did the president deal a blow to the war on terror?

CRITICS: PRISONER SWAP WILL HEIGHTEN DANGER AND FUEL COSTS IN WAR ON TERROR

JONATHAN HOENIG: A soldier's job is to destroy the enemy, not to be made a sacrifice for them, and that's exactly what we've done. The President sacrificed American men to look for a deserter who, as I understand, turned into an Islamist. Someone who denounced the United States, by releasing not just creeps-- by releasing the enemy. By releasing people that have made war against this country. For the President to be so nonchalant about it-"oh yeah, they might return to the battlefield"-to me seems like a complete dereliction of duty as the Commander in Chief. What says it all is the we sacrificed one penny of American taxpayer dollars by buying these Islamists halal meals and prayer rugs for the last decade. It's a total appeasement, and that's why we're losing the war on Jihad.

MICHELLE FIELDS: The Wall Street Journal is reporting that one of the detainees who's already returned has told his family that he plans on waging war on America. So what this President did is he made a deal with the devil for a deserter, a man who didn't even like America; who didn't want to be American. This President claims he has a "no man left behind" policy, I guess that didn't apply in Benghazi. What he's telling these people though, these terrorists, is that he will negotiate with them and that Americans can be used as bargaining chips.

JEHMU GREENE: I don't think the victory lap was necessary, but there may be legitimate questions about Bergdahl's capture. What's not in question is that this is America and we bring our soldiers home first and ask questions later. We are at war with the Taliban. That war is coming to an end.

WAYNE ROGERS: I think there are so many questions here. I mean Jehmu refers to the fact this guy was a soldier-I'm not so sure he was a soldier. This guy may have been, as it turns out, he could have easily been somebody who's a trader. We don't know that yet. The people who know better than anybody are his platoon leader and all of the people he served with, and they say he was a deserter. Why is he a soldier under those circumstances? No, it's a bad swap. I'll tell you something else, it may be illegal, too. The President may have done an illegal thing, and when you talk about Susan Rice for God sake, I mean this is the second time he's gone on and told obvious lies. She's prompted by the administration. This is all political. They're saying republicans are political-they're making it political.

MICHELLE FIELDS: States should be able to decide whether or not they want to do that, but personally I actually don't like this at all. I think it's unfair that they're going after poor people that receive tax benefits and dollars rather than going after everyone. If they want to implement this, okay that's fine, but why not drug test congressmen, why not drug test all of the CEOs of green energy companies that get taxpayer dollars as well. Florida implemented this and it didn't do well. It ended up costing a lot of money and almost every single person passed the drug test. So the incidents are really low. If they want to reform Welfare, how about cutting it? Don't go drug testing people.

JEHMU GREENE: For the first time I absolutely agree with Michelle. Let's drug test Jamie Diamond, Lloyd Blankfein, all their stockholders and see which ones are taking Ritalin, Xanax, etc., the corporate welfare that they are receiving-the hundreds of billions of dollars. That's a conversation I'd like to have.

JONATHAN HOENIG: Let's not drug test anyone, but let's also not steal from anyone. I hope we can all agree on that. That's exactly what food stamps are. That's what it is. Food stamps are your money is taken from you, and it's given to people who he government say deserve it more than you do. Of course, to Michelle's point, with controls come more controls. They're going to decide who can get it, what they can buy, what they can't buy. Government is not charity. If you want to help someone who you believe is needy, help them. But for government to make redistribution of wealth part of its core functions, as I know Obama wants to do, is completely corrupt.

JEHMU GREENE: I agree with him to some extent because this is a great message to send to young black people. That it does not matter. Morgan Freeman also thinks that the human race is a parasite, so there you go.

JONATHAN HOENIG: Who talks about race, Eric? Racists; they're the ones who are always talking about race. Income inequality and inequality isn't a problem, it's simply a metaphysical fact. What we should be focusing on is equality under the law, not that everyone should have the same amount of money in their bank accounts.

WAYNE ROGERS: I think it is a good thing, and I'll tell you something else: Morgan Freeman is exactly right. The President of the United States is a perfect example of this. Boy I wish I had his income and could take his golf vacations. He's a man of color and he's done very well.

MICHELLE FIELDS: This country is about equal opportunity, it's not about equal outcome, and you can achieve whatever you want despite the color of your skin or your gender. So people need to stop using their minority status as a crutch or an excuse.

WAYNE ROGERS: FIRE UP PROFITS WITH GUNS AND (SWHC)

JONATHAN HOENIG: GET REAL RETURNS BY INVESTING IN JAPANESE REAL ESTATE AND (DXJR)