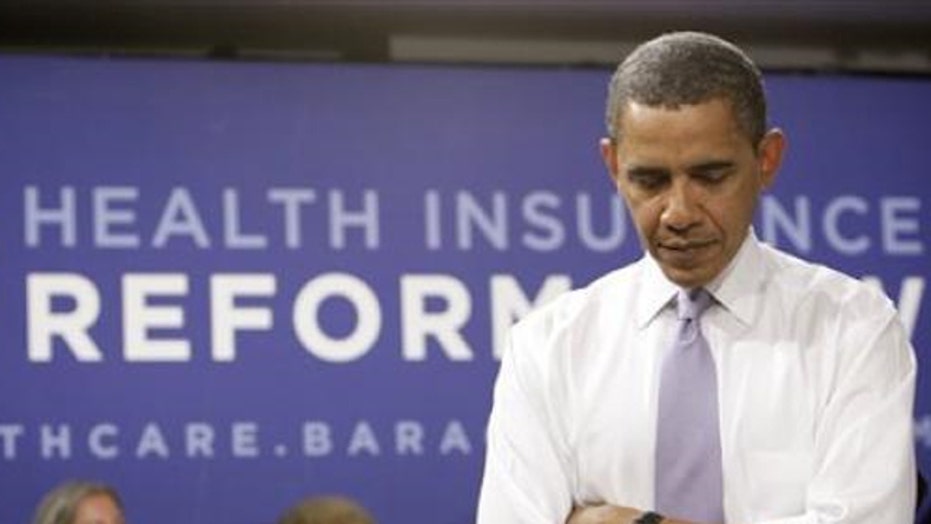 GARY KALTBAUM: Well, look, it was always going to be from day one. They had to, I'm going to use the word 'fib.' Economically unfeasible. There's no way you can look at the American public and say 'We're going to add all these people into any product, and by the way, it's not going to cost anymore. We're seeing the outcome of that, and it's only going to get worse. We're just starting at this point in time.

DAGEN MCDOWELL: Oh, well we've got evidence of it right now. LA Times reporting that Anthem Blue Cross in California will raise premiums up to 25 percent for people who are grandfathered in to older plans. Now, the state's trying to put a stop to that, but this is the kind of thing you're going to see. How about when the Cadillac health care plan tax kicks in, 40 percent excise tax in 2018. That's going to hit -- guess who? Unions. And you're going to see more and more outrage.

BEN STEIN: You've scared them away. No, just kidding. Mr. Obama basically promised something that could not be done. He promised he would defy the laws of mathematics, arithmetic and statistics and it can't be done. I admire him for making the attempt, but it was an attempt by someone who is naïve and ignorant of how the real world works. He should not have promised such grandiose things, and he should've just done the simple thing, which Nixon said he was going to do. Find out who cannot afford private health insurance and give those people a check to buy private health insurance. Simple, done and done.

CHARLIE GASPARINO: Well, here's why: Isn't it somewhat ironic that the man who gave the huge assist to ObamaCare, Mitt Romney, is actually criticizing ObamaCare. Doesn't that strike you as a little odd?

ADAM LASHINSKY: A lot of people criticized this law, starting with you Charles, and I say that actually quite seriously. I'm using you as a metaphor. This whole segment is based on a survey of people. 'What do you think will happen to your health costs?' And we tell them constantly, this is a terrible law. This law isn't going to work.

GARY KALTBAUM: Adam, look, you sit there talking surveys, I'm talking real world. I put it out there to my radio audience to send me emails on what's exactly happening to their insurance. They're either getting kicked off or their premiums are going up. Everything's going up and they're complaining, not just Republicans. It's Democrats also.

CHARLIE GASPARINO: Adam, God forbid we should follow a good story. You and the president talk about the millions of people who signed up. Yet, you will not release numbers on how many people paid.

DAGEN MCDOWELL: The bigger picture I want to focus on, the reason that this law is not gaining favor is because the people who had insurance are being impacted. They're getting dumped off their insurance plans. They're worried about losing access to their doctors. It's why somebody would stay in a grandfathered plan. Three hundred thousand people, or more, in California who are going to get their premiums raised by just Anthem, just in California -- up to 25 percent potentially. The issue is that this law will change the way that we access doctors and access health care, which is going to make everyone hate it.

CHARLIE GASPARINO: But Ben, remember how they did it? The left, the progressives for years would complain about our crummy insurance system, how this is horrible, HMOs, all this stuff. And guess what they did? They just took that system and expanded it. That's what we have now, the same crummy system that people like Adam and the left, and people that watch television shows would cry about how the insurance companies are doing X and Y, just expanded it.

DAGEN MCDOWELL: I've been silent for the most part over here. I wanted to add something to one point that Adam said, is that every time you argue a point of fact, anybody, against Obama care, if we point out something that's gone wrong with it, people act like we are the devil. I'm tired of people on Twitter telling me, 'I hope you die of cancer,' because I have problems with ObamaCare. That's the way the Liberals have treated this. If you say anything negative that's a point of fact, they want you to jump off a cliff.

ADAM LASHINSKY: That's a good example of how our debate gets poisoned. I say messy, I mean complicated, not as good as it should be absolutely. You say 'disaster' by way of denigrating the entire thing and saying what you've been saying all along. By the way, you've been consistent, I admire you for it.

GARY KALTBAUM: And look, forget opinions, I deal with facts and numbers. The numbers are just a horror show and here's my big worry, we're in the infancy of all this. And the people that brought it to us, they didn't know what they heck they were doing. So, what's next? What's going to be the final outcome?

GARY KALTBAUM: Yes, quite the irony. The government telling you, 'Go ahead and save, but we're $17 trillion in debt and go ahead, but you can only buy bonds, which by the way, creates more of our debt.' I love the way it looks, but look, saving is good. I tell people in the public, save as much as you can, but we already have IRAs that, by the way, give you a choice. You can do whatever you want to do with it.

CHARLIE GASPARINO: What's so dumb about this is you can already do this already with a treasury bond.

DAGEN MCDOWELL: It won't amount to enough money to matter to our debt, No. 1.

ADAM LASHINSKY: Listen, you smarty pants are going to hate this but people either don't know how or don't buy those instruments, and so the president is offering a plan to help them.

CHARLIE GASPARINO: Let me ask you this Adam, would you hire President Obama as your financial advisor?

ADAM LASHINSKY: You know, you're purposely clouding that issue.

GARY KALTBAUM: There are already trillions of dollars in retirement accounts. People have gotten it. They have done a good job with it, and to say, 'Oh, you can have this account but only one thing, a T bond versus you do a market. Sorry, I don't like that.

DAGEN MCDOWELL: That's the thing that frustrates me about savings vehicles in this country. The government has already made it so complicated between traditional IRAs and ROTH IRAs. Add another one, and this one has income limits. I just want them to simplify it and open the door for people to save as much as they want to.

BEN STEIN: It's not a problem if they're collecting aggregate data like, what is the total amount of mortgage debt outstanding.

GARY KALTBAUM: Charles, the giant colonoscopy of America continues and it never ends.

CHARLIE GASPARINO: Well, you know, I would just like some explanation of why they need all this, but you have to ask yourself, the same morons who are telling us you have to buy an IRA wants to collect all this stuff. OK, why should I trust them?

DAGEN MCDOWELL: No, I'm just fixated on what a colonoscopy of that size would actually look like.

DAGEN MCDOWELL: The one thing that might trigger even bigger concern about it is the fact that you have like, that Target data breach, which compromised more than 100 million accounts. Will people trust the government with that data?

ADAM LASHINSKY: You know, I think we should definitely scrutinizing everything that they're doing but I think we're trivializing the fine work that our national security apparatus is doing to keep us safe and has kept us safe since 9/11.