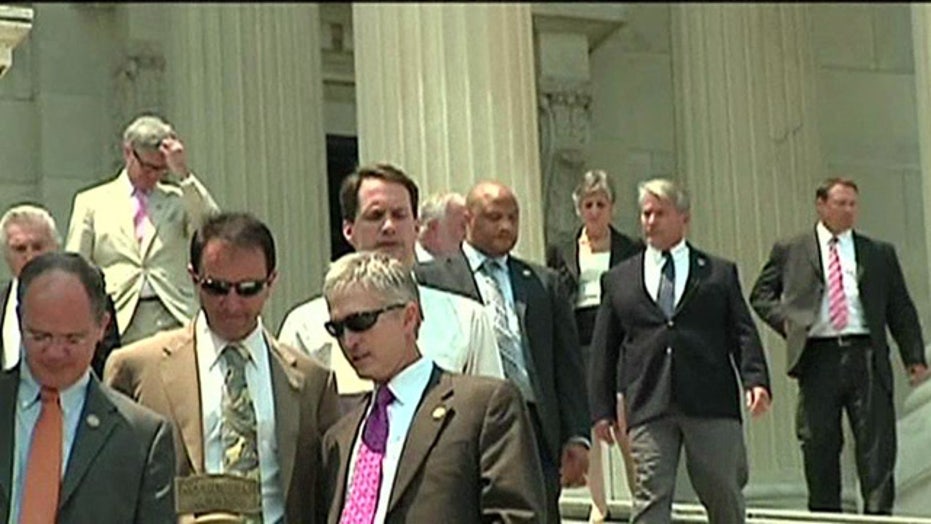 Poll: Nearly 75% of Americans want to throw 'throw the bums out'

LARRY GLAZER: The single greatest asset we posses as a nation is our credibility and our trust. These last few weeks have reminded us how fragile that confidence and trust is; it's time to revisit that before we get in trouble. Throw the bums out? Maybe. At a minimum let's get them back to work on our problems.

DAGEN MCDOWELL: We elect members of the House of Representatives every two years, so I have to believe that whether it is good or bad, some of what we saw is a representation of those lawmaker's constituents. A lot of people are happy with Senator Ted Cruz putting his foot down and sending a message.

CHARLIE GASPARINO: It is a hard question to answer because the general public keeps voting the bums in. Incumbents generally have an advantage for a reason. This is the same reason I'm against the death penalty, I don't trust the will of the American people. If you are going to keep voting these people in, I believe you can convict someone improperly of murder.

ADAM LASHINSKY: I do trust the will of the American people. I agree with Dagen, they were actually representing their constituents. They wanted to throw sand into the gears of government, they did it successfully, and they behaved in a disgusting and childish way. I think they'll be thrown out of office for it.

CHARLIE GASPARINO: I think affirmative action is a noble idea; the problem is it is no longer to help disadvantaged African Americans. You can be a rich minority and get extra points on your SAT. How is that American?

DAGEN MCDOWELL: If you look at older Supreme Court cases, they really look at affirmative action as something that would change over time and not be necessary down the road.

ADAM LASHINSKY: Dagen had the right word. Is it necessary in some instances or not? We should not take it out of our tool kit completely. We decide when discrimination is a problem and we decide when it isn't a problem.

LARRY GLAZER: A lot has changed in this country since the early 1960's. First, demographics have changed dramatically. This is not just a domestic issue, this is a global issue. The European Union is evaluating affirmative action; Sweden just overturned affirmative action in several cases. As the world evolves, the policy needs to be thoughtfully updated.

DAGEN MCDOWELL: Give people a reason to get out of the house. I look at the newspaper for the stabbings on Thanksgiving. If you don't like your family and they're getting on your last nerve, take them shopping!

ADAM LASHINSKY: There are more important things in life than making money. It is important, I love it! Black Friday is for making and spending money, but people should enjoy Thanksgiving with their families.

LARRY GLAZER: Blame Al Gore! It's his creation, the internet, which started all these problems. I have to work all the time, I don't like it one bit. In a perfect world, people wouldn't have to work on holidays and weekends, but we don't live in a perfect world. We have to learn to navigate this.

CHARLIE GASPARINO: I worked as a dishwasher in an Italian restaurant growing up. I worked every Easter. I made extra money; I got away from my parents, which was a good thing at the time. What's wrong with making extra money? You can take off another day.