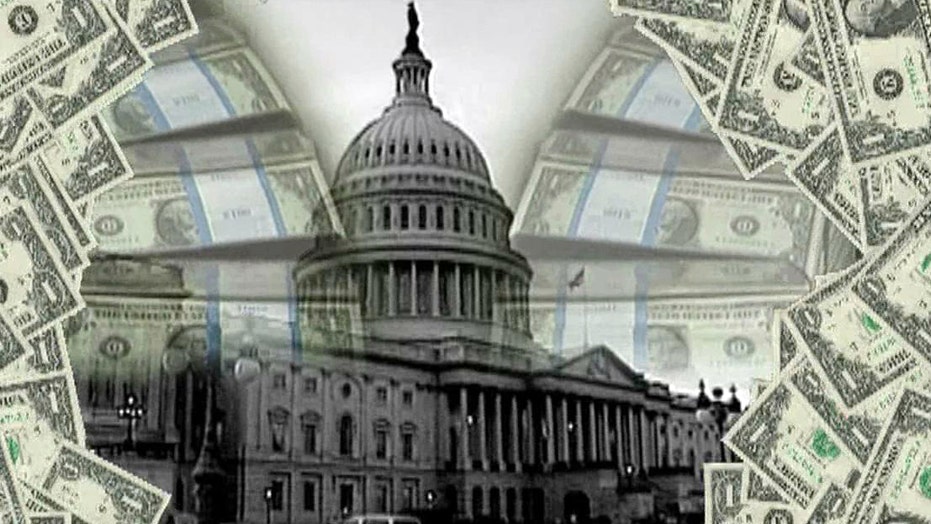 Lawmakers unwilling to risk their jobs?

CRITICS SLAM BOTH PARTIES FOR PUNTING ON TOUGH DESCISIONS

BEN STEIN: Well, it's a scary situation. Everyone in Congress is scared of Governor Norquist and his "no new taxes" pledge. They're scared of the Black Caucus with their threats against anyone who cuts any hint of service entitlements. They're scared of the AARP about ending anything that has to do with retirement or Medicare. They're running scared from interest groups and at the end of the day we're going to be in default.

GERI WILLIS: The average family in this country owes $52,000. That's your share of the federal debt. Even if the left and the right agree on where to cut -- let me give you an example -- the Christopher Columbus foundation. A 450,000 line item in the budget and Congress has tried to kill it seven times. The President tried to kill this program.

CHARLIE GASPARINO: The American people are responsible for this. You're going to elect divided government. You're going to put Republicans in the house, you elect one of the most liberal Presidents since FDR and you're going to keep Harry Reid running the Senate. It's hard to feel sorry for the American people on this issue when you put back into the Presidency Barack Obama who ignored his own deficit panel. With the Republicans punting, I think that's a smart thing. If they're really going to go to battle on this thing then they have got to get their acts together.

ADAM LASHINKSY: Politicians should be prepared to lose their jobs on major issues. There comes a gut check time when we have to say, "I'm going to do what's right." The question is, "Is this that time?" I don't think delaying the debt ceiling issue for three months, for punting which it absolutely is - is the worst thing in the world and here's why. The economy is growing. Housing is recovering. We're going to get a little bit of relief here.

CHARLIE GASPARINO: I can't see the Chinese and this extending into the Asian markets which will be the place where people transact a lot of business. The interesting thing about markets is there is something to be said about having to live in New York or L.A. if you're in the media or entertainment business. You do not have to trade in Europe. There are exchanges all over the place where you can bypass this stuff.

ADAM LASHINSKY: You talk about London surpassing New York. The A market in London turns out that it had a bunch of frauds on it and didn't go so well. There are some reasons for keeping your capital in the industrialized world.

SHOPPERS ON NOTICE AS NEW CREDIT CARD FEES KICK IN

GERI WILLIS: It's more than a nightmare. People love their credit cards and it's understandable why. This is a way for you to build equity, to make banks know who you are and build your credit score. At the end of the day it may cost you more to take that credit card out in stores all over the country.

CHARLIE GASPARINO: I'm not a consumer finance specialist or expert, but how do you build equity by using your credit card? I think this is somewhat of a good thing. People are in debt too much.

BEN STEIN: I don't think it's a good idea, but I think what'll happen is that competition will eat away at it and there will be some who will say we won't charge it and everyone will say it won't happen.