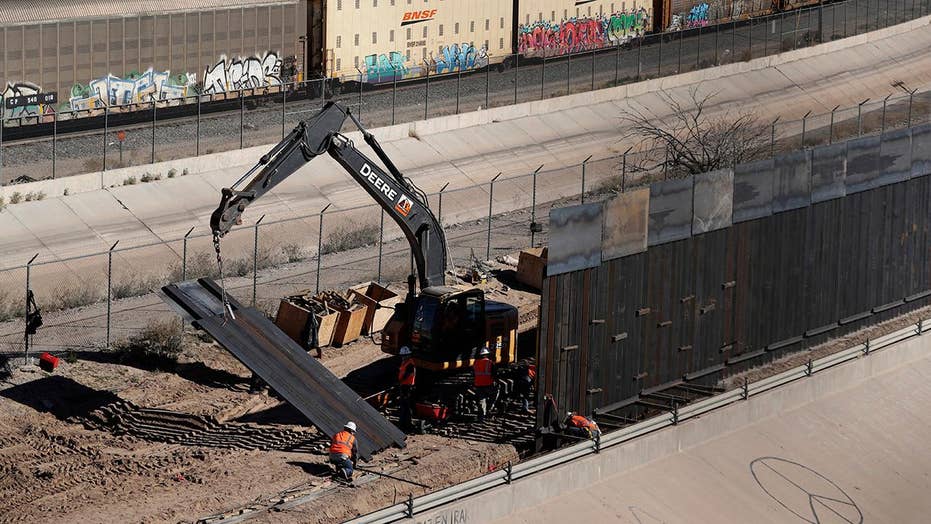 This is a rush transcript from "Special Report with Bret Baier," February 11, 2019. This copy may not be in its final form and may be updated.

PRESIDENT DONALD TRUMP: We're up against people that want to allow criminals into our society.

SEN. LINDSEY GRAHAM, R-S.C.: This idea of reducing bed space is something new. It is even more extreme than the green deal.

UNIDENTIFIED MALE: The big problem here is this has become pretty much an ego negotiation.

SEN. JON TESTER, D-MT.: I think we are going to end up with something that deals with detention beds, with barriers, with technology, with the challenges we have on the southern border.

BRET BAIER, ANCHOR: Well, the negotiations are continuing right now on this hour up on Capitol Hill, but this new wrinkle about detention beds, not letting the Trump administration have too many of them so that more families are not held in these facilities, this is what the House majority leader said about this committee.

HOUSE MINORITY LEADER STENY HOYER: Clearly, if we have people who are committing crimes, putting in danger either people or property, they ought to be taken off the streets and, frankly, incarcerated or held.  But we are talking about beds sufficient not to deal with criminals, which is what the case is now, but dealing with people who are working, paying taxes in our community.

BAIER: So much for things looking good.

President Trump saying "The Democrats do not want us to detain, or send back, criminal aliens. This is a brand-new demand. Crazy!" The president obviously heading to El Paso for a big event, also talking to Laura Ingraham tonight at 10:00 p.m.

Let's bring in our panel: Katie Pavlich, news editor at Townhall.com; Mara Liasson, national political correspondent for National Public Radio, and Washington Post columnist Marc Thiessen. Apologize for the voice. I thought I could get past the cold. It just wasn't going away.

Marc, it seems like this turns the tide, that it sounded like there was progress being made.

MARC THIESSEN, AMERICAN ENTERPRISE INSTITUTE: Yes, the Democrats are moving the goalposts. So if you remember, during the whole sequester, their key talking point is we are just against a wall, but we're for border security, we're for enforcement, we're for all of this stuff. And now all of a sudden, they are threatening a government shutdown over detention beds. It's ridiculous.

I think the way to do that is to threaten, use the threat of a sequester, not a shutdown, to get the Democrats to give him his border money. So in December, 10 months from now, the 2011 Obama budget caps kicked in in 2011. And that means if Congress doesn't act and the president doesn't sign something with the wall, $55 billion in domestic spending gets cut, which are Democratic priorities. Do Democrats really want to lose $55 billion in domestic standing just to deny Donald Trump $5.7 billion for his border wall? I don't think so.

So Trump needs to get a continuing resolution, which Democrats can't say no to, that just continues spending at the current levels until the end of the year, and then say I'm not going to do a deal on the sequester that doesn't include $5.7 billion for my budget wall.

BAIER: Not to be cliched, but Mara, are Democrats are really willing to die on this wall? On detention beds?

MARA LIASSON, NATIONAL PUBLIC RADIO: I would be mystified if they were. They were doing pretty well. They kind of had the presidents on the ropes. He agreed on their terms to end the first shutdown. He wasn't going to get the $5.7 billion of the wall.

BAIER: And they were fine with that, short of that.

LIASSON: They were fine with that. When the debate is about the wall and the wall only, Democrats win. When the debate is about border security, then the president wins. And I am mystified by this detention beds thing. I know that they don't like the ICE policies, but I don't even know why minimizing the number of beds would change those policies. So I think either this is a momentary snag right before everything comes together at the very last minute, like it often does in Congress, or we are heading for in other CR. I think your idea is really smart.

LIASSON: Continue resolution, either just to give the negotiators a little more time, or if they go through the end of the year, that means that Trump is playing a much longer game.

BAIER: Katie, at the same time you have Alexandria Ocasio-Cortez, others saying that ICE shouldn't be funded as well. It's in the backtrack of this negotiation on the left side of Democratic Party. So what's happening here?

KATIE PAVLICH, TOWNHALL.COM: But it's also in extremely bad faith, because the reason why there are not enough detention beds is because Democrats are rejecting it. So let's look at why we got here. Last year, there were a number of reports showing that the humanitarian situation inside these detention centers was not good. There was overcrowding, there were not enough beds. So the White House sent a letter to Capitol Hill during the government shutdown in January and offered $5 billion, almost as much as the wall, to fund 52,000 ICE detention beds to expand the humanitarian situation there to make sure that more people were held humanely. And now here we are with Democrats at the last minute saying we're going to put a cap on the number of humanitarian beds that you can have, and, by the way, that means you can release criminal aliens and illegal aliens into society.

And you have to look at the language here, because, as Marc said, Democrats have been saying we are for border security, we're not for open borders, and yet they're proving President Trump's point by saying there is an overcrowding crisis at the border, and at the same time they are admitting that, look, we have a problem and we don't have any way to deal with it other than just limiting -- one more thing, we have Democrats saying that illegal immigrants aren't -- there's immigrants who are here working and they're law-abiding, paying their taxes, and therefore they shouldn't be held at all. That is the definition of open borders, when you don't want them to be held at all for coming into the country without permission, which is a federal crime.

BAIER: It is an interesting turn on the negotiations. At the same time, the Ninth Circuit Court of Appeals has ruled that the administration can continue building the wall in San Diego. And also on the table, the national emergency possibility. Take a listen to the chief of staff.

MULVANEY: It's absolutely on the table. And it's not a precedent. This is the law, the law as it exists today. I think we've had 58 declaration of national emergencies since the national emergency act was passed in 1970s. He would prefer legislation because it's the right way to go and it's the proper way to spend money in this country. But if that doesn't happen, the president perceives his number one priority is national security. He will then look at the National Emergencies Act as a way to do his job.

BAIER: So he could make it down that road tonight in El Paso.

The way to go is by doing this continuing resolution, because think about what a continuing resolution for 10 months does. First, it's a defeat for Democrats because Nancy Pelosi now has to abide by the Paul Ryan spending levels for the entire year, so they just won the majority, they're ceding the power of the purse back to the Republicans, number one. Number two, it gives Trump $1.3 billion towards his border wall. Mick Mulvaney is going to find him some other funds. He can start building it now. And then in December, he gets the leverage back because he can hostage this $55 billion in spending they want in exchange for the $5.7 and they're going to cave because there is no shutdown. It's just an automatic spending cut.

LIASSON: You sound like you worked in the White House.

BAIER: But Steny Hoyer says today they don't want to do a CR, that they're not going to do a CR.

LIASSON: Well, what are they going to do?

BAIER: See the government shut down?

PAVLICH: The shutdown was not as bad for President Trump as most of the people in the media made it seem. The economy actually did well. There wasn't this dire straits that everyone was claiming there was going to be - -

BAIER: Unless you weren't getting a check.

PAVLICH: Correct, but all those people got backpay eventually, and that's different than a lot of people in the Midwest who lost their jobs overnight in the financial collapse and didn't get backpay for their jobs.

So the point is that, yes, a government shutdown is not a good thing, but it was overblown by a large portion when it came to the negative effects for President Trump when you look at the polling and the data, economic data behind it when --

LIASSON: It bounced back.

BAIER: So does the bed thing go away? Do they figure this out?

THIESSEN: They have to back off of this, or else there's going to be a government shutdown, or he's going to take this smarter approach.

PAVLICH: I don't know. I don't think Democrats are willing to negotiate in good faith. I think that they want another shutdown because they think they have the public relations on their side, so I wouldn't not give them too much credit in taking that off the table.