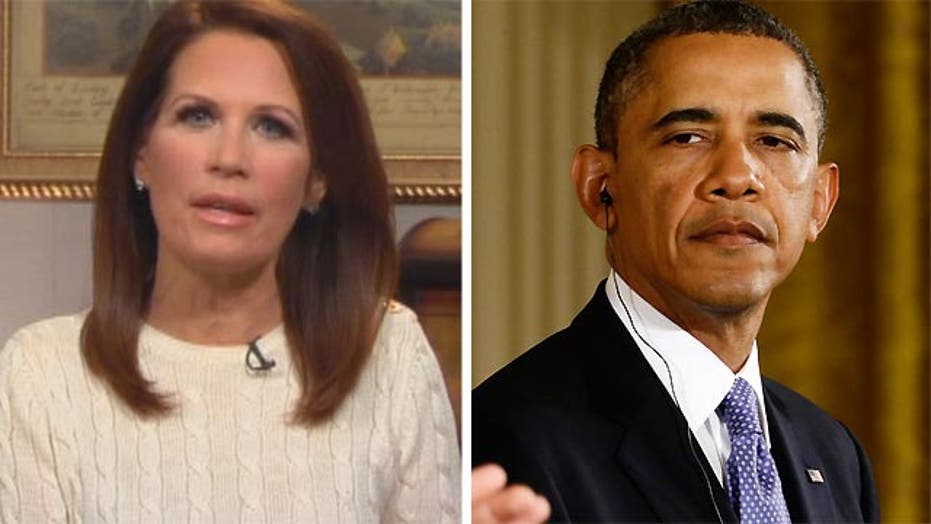 Michele Bachmann joins us now from Washington. So, it was a holiday party, right? They don't call it a Christmas party first of all, right? Holiday party?

BACHMANN: Well, we all call it a Christmas party. It was a great party and it's always an honor to attend.

O'REILLY: All right. So you are there and the President and the first lady in the receiving line -- right. That's how they do this.

BACHMANN: Well, it's a photo line. Our families are there. We are all dressed in ball gowns and tuxedos and the President and the first lady stand next to a fireplace and the families come members of congress come one by one and then we take our photo with the President and with whoever we bring with us for the Christmas party. It's a high honor and so we had done that.

And I knew that this would be the last time that I would speak to the President as a member of congress. I thought I want to say something substantive to him about what I think is the most consequential issue of the day. I had shared that with the family that I was going to do that. And our oldest son said please, don't embarrass me. I don't want anything to happen. And so I said ok, no problem.

So I made sure the photo was done. And after the photo was done I turned to the President and I said, "Mr. President, with all due respect, I'm concerned about the Iranian nuclear program and I think it would be wise to bomb the program before they obtain a nuclear weapon because once they obtain the weapon, the world changes." And the President smiled and was fairly condescending and patronizing and said "Well, it's not quite that easy, Michele but that's ok." Like I'm just an idiot and I don't know anything.

And I said, "No, Mr. President, seriously this is on your watch. They cannot obtain a nuclear weapon and I'm very concerned." And so anyway, that was it and I said "Merry Christmas" and he said "Merry Christmas" and on I went. But what I wanted to do was make sure that I left him with a message that, to me, is the most important message right now because I sit on the intelligence committee.

I'm not sharing any classified information. But it's my opinion that Iran is very clearly actively seeking to have a nuclear weapon. They've state unequivocally even within the last month that they will use that weapon once they get it to annihilate the Jewish state of Israel. But they've also announced they will use it against the United States of America so this is the ultimate high stakes bingo -- we can't get this wrong.

O'REILLY: Ok. So that -- your son, did he run away from home after you said that?

BACHMANN: Well, he's a psychiatrist so he has a full-time job.

O'REILLY: There you All right. Now, you are -- look. Certainly you know that if President Obama bombed Iran that would start World War III. On the unintended consequences of a unilateral military action, when certainly when there is a negotiation taking place -- the whole world would turn against us and it would be -- it would be an unbelievable situation. You know that.

BACHMANN: Well, remember, I'm not calling for bombing Iran indiscriminately. What I'm talking about is and what I said to the President is to bomb the nuclear hardware. We know where the hardware is.

O'REILLY: Ok. But no matter, if one bomb from one American plane falls on Iran particularly while these negotiations are underway, it's World War III. They declare war on us. Their allies attack us everywhere in the world. Putin and China stoke the flames. Our allies in Europe don't support us because we didn't consult with them. You know about all this and so I'm a bit surprised that you were that -- let's bomb Iran.

BACHMANN: And also George W. Bush ended a nuclear program that Gadhafi wanted in Libya. We have done this before. There is precedent. And again what we need to understand is that we are batting 0 for 9. There are nine nations that we did not want to see obtain a nuclear weapon -- North Korea being one of them. Iran is the number one state sponsor of terrorism in the world. They are actively seeking this bomb. Once they have it they will use it.

And here is the other thing Bill that we need to recognize. I think they are very close at achieving their goal. The other thing that we need to know is that President Obama is undercutting our military. We don't know how long we will maintain our capacity to be able to remove that threat. Once they obtain a nuclear weapon, we lose our option.

O'REILLY: That's all going to change with the Republicans taking over in Congress.

BACHMANN: Iran may have a nuclear weapon before a Republican takes over.

O'REILLY: Listen, I'm not arguing any of that. I'm just saying the unintended consequences of such an action as a historian would be almost unprecedented.

Listen, Congresswoman, I wish I were there to see that exchange. That was a very interesting deal. And you know what you've succeeded in doing? Reigniting the issue and getting the issue back on the consciousness of people.

We appreciate it. Merry Christmas you.