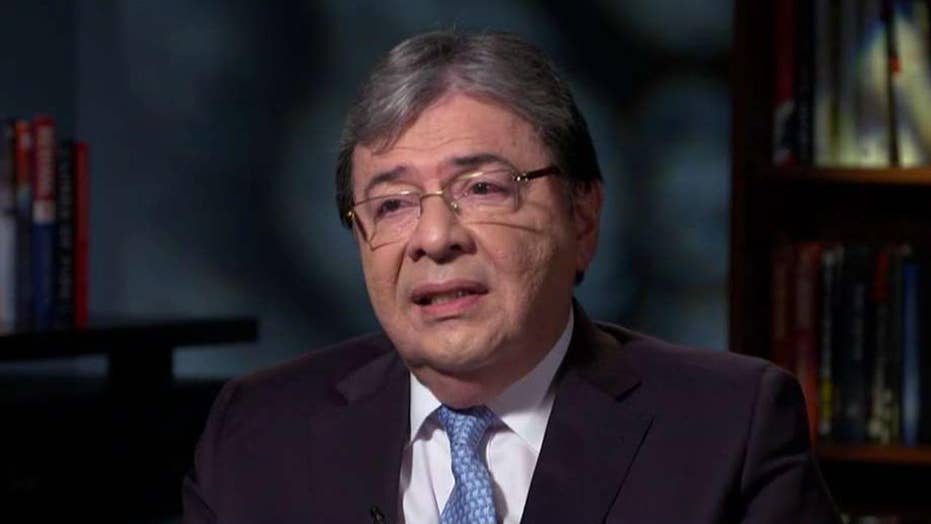 Colombian foreign minister: Venezuela crisis is a regional issue that will have a global impact

Colombian Foreign Minister Carlos Holmes Trujillo on how the Venezuela crisis is impacting his country.

This is a rush transcript from "Special Report with Bret Baier," August 2, 2019. This copy may not be in its final form and may be updated.

MIKE EMANUEL, HOST: Earlier this week, we told you the International Monetary Fund says Venezuela's current economic crisis is among the deepest five-year contractions in the world over the last half century.

Yesterday, the U.S. Commerce Secretary said, Washington is ready to support pro-market reforms and privatizations in Venezuela. The turmoil there has had a major impact on next door neighbor Colombia. Tonight, my colleague Bret Baier talks with Colombia's Foreign Minister about the situation.

BRET BAIER, ANCHOR: The biggest issue facing in your region now still continues to be Venezuela. Your next door neighbors. What is happening? It seems like there was an effort for a transition there that fell apart.

CARLOS HOLMES TRUJILLO, COLOMBIAN FOREIGN MINISTER: This is a process. Dictators never fall from one day to the order. The issue is creating conditions that finally leads to the end of tyranny or dictatorship. And that's what is happening.

BAIER: You're feeling the results of that because you have people coming over to Colombia that you have to deal with.

TRUJILLO: Yes, of course. And we are facing a huge challenge. You know, we are attending 1,500,000 Venezuelans coming into Colombia. And the worst thing of this story is that the number is increasing and increasing every day. That is why we are calling to the international community to give us more support, because this is not a Colombian issue. This is a regional issue that has a global impact. And the real change is going to take place when the change for democracy and freedom goes to Venezuela.

BAIER: But for people looking at it and they listened to the President talk about Nicolas Maduro and some of the administration officials say that his days are numbered:

MIKE POMPEO, SECRETARY OF STATE: The Venezuelan people have made its day's numbered.

CARLOS VECCHIO, VENEZUELAN AMBASSADOR TO THE US: Nicolas Maduro, your time is over.

PRESIDENT DONALD TRUMP: We're here to proclaim a new day is coming in Latin America. It's coming. BAIER: And now the number is increasing. I mean, it seems like Maduro is implanted with help of the Cubans and the Russians.

BAIER: How detrimental is the current Venezuelan regime to you and to the region?

TRUJILLO: It's doing a lot of harm to Colombia, to the region? It's a menace. It's a challenge to democracy, it's a challenge to respect the human rights. And in our case, the challenge he's felt every day because of the increasing number of Venezuelans coming into Colombia, because of terrorist organizations acting against Colombian interests from Venezuelan territory. Because the impact of the bad policies, economic policies in Venezuela. BAIER: When you hear President Trump talk about securing the U.S. border and the efforts to stop illegal immigration into the U.S., what is the sense from a Colombian point of view about how he's dealing with that.

TRUJILLO: Migration is award challenge. Every country is taking its own measures in accordance to the sovereignty that each country has.

BAIER: In other words, you appreciate what he's saying about the sovereignty of the U.S.

TRUJILLO: Yes, of course. We have to respect the decisions taken by other countries in the region.

BAIER: The President has publicly said that he's had a problem with Colombia in fighting drugs, back in March of 2019. He said this:

TRUMP: I'll tell you something, Colombia. You have your new President of Colombia. Really good guy. I've met him. We had him at the White House. He said how he's going to stop drugs; more drugs are coming out of Colombia right now than before he was President. So, he has done nothing for us.
(END VIDEO CLIP)

BAIER: I mean, that doesn't sound too good.

TRUJILLO: No, but more recently, he said, I have news, the President Duque is doing very well, and they are having good results.

TRUMP: We have a very good relationship in Colombia with the new president who's doing I hear a very good job.

TRUJILLO: The advances are immense. And we are going to keep working very strongly with the help of American administration in order to face together the world drug problem.

BAIER: Colombia is one of the world's largest producers of cocaine, a huge problem for the U.S. according to the DEA, more than 90 percent of the cocaine found in the U.S. is produced in Colombia. And the fight to stop it can be dangerous. The Coast Guard recently released a video of officers boarding a speeding submarine off the coast of Colombia last month that was filled with more than 17,000 pounds of cocaine. In 2012, it's estimated Colombia produced approximately 210 metric tons of potential pure cocaine. That number rose dramatically to a high of 900 metric tons in 2017 and has dropped just a fraction since that time. The foreign minister promises the administration is working to reduce that number further.

TRUJILLO: Look at this. When President Duque took the oath of office, he inherited 200,000 hectares of illicit crops. So, the first thing that President Duque did was to strengthen the operation in Colombia in order to get those numbers down, they have leveled off already. And they're going to start to go down. Due to the huge effort that the administration made.

BAIER: Critics partially blame the ongoing drug problem on the previous Colombian President who brokered an historic peace deal in 2016 with the country's largest rebel group, the FARC. A deal that ended 50 years of internal conflict and earned Juan Manuel Santos the Nobel Peace Prize. Can you say now definitively that the peace deal that former president Santos cut with the FARC was not a good deal?

TRUJILLO: In some sense it was a good deal. In some other senses it was a bad deal. So decisions taken during the negotiation stage that had to do with the number of hectares of illicit drugs where bad decisions.

BAIER: So is that getting through to the administration? Because they are considering cutting off some funding, aren't they?

TRUJILLO: We need more cooperation. We need to work together. The idea that Colombia is bilaterally working very closely together with the United States, and we are very grateful for that. And internationally going back to defend the principle of shared responsibility and integral view against the war to drug problem, that's Colombia's policy.

BAIER: And is the Trump administration buying that?

TRUJILLO: Yes, of course. We are sure that this is a shared responsibility. And we are sure that working together in each and every link of the chain is fundamental.

BAIER: So will you be able to convince the Trump administration to continue to invest in Colombia?

TRUJILLO: Thank you very much for this opportunity.