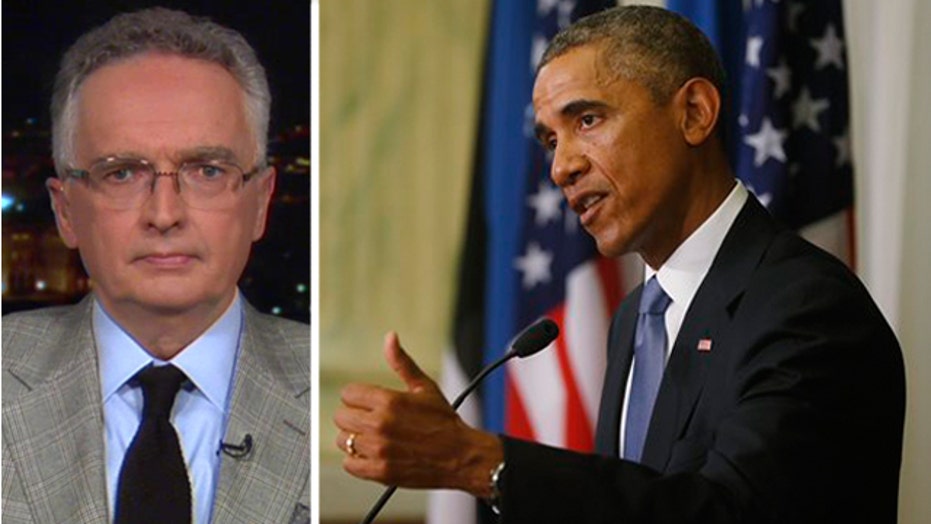 Why the president needs to outline a 'viable' program

This is a rush transcript from "Hannity," September 9, 2014. This copy may not be in its final form and may be updated.

SEAN HANNITY, HOST: And here to tell us what he expects to hear from the president when he addresses the nation tomorrow, Fox News strategic analyst Lieutenant Colonel Ralph Peters.

Colonel, we now have 50 -- 91 percent of Americans now see ISIS as a serious threat to American vital interests, 71 percent support air strikes against ISIS. The president has been giving pretty much an incoherent message, inconsistent message. Is there anything he can do to get back credibility on this?

LT. COL. RALPH PETERS, U.S. ARMY (RET.), FOX STRATEGIC ANALYST: Well, yes, there is. He could give a forceful speech outlining a viable program to defeat and ultimately destroy ISIS. And then he could implement it because the crucial thing is, you know, Sean, with this president, isn't what he says, it's what he does.

So he's our president. I want him to do well. I'm not a reflexive, you know, "get Obama" guy. I want the best for our country. But this president has to step up. And I am very concerned because the leaks, the trial balloons the White House has sent out include this three-phase plan.  And all three phases that have been leaked are bad, bad, bad!

The second prong of this -- the second phase is supposedly training a new, integrated, rule of law, forceful, capable Iraqi army. Our -- the U.S. armed forces just had eight years and extravagant resources and couldn't do that! The Iraqi army collapsed because there's no Iraqi identity left. But Obama keeps -- keeps believing in this unicorn of a unified, integrated, everybody-loves-everybody Iraq.

And then the last part, which has come out in a couple forms, is Syria. One suggestion leaked was that the president might not get to Syria, that the next president might have to address the heart of darkness, the heart of the problem. If that is the case -- and I hope it is not -- that would be one of the dastardly, cowardly low points of any presidency!  You can't kick that can down the road! If you want to do this right, you go into Syria, you do it now, and you do it with a lot of smacking power!

HANNITY: But Colonel, he's been so wrong so often -- I mean, the JV team comment, which everybody seems to know about, but also, when he pulled out of Iraq, he described Iraq as sovereign, stable, self-reliant, with a representative government, his comment the tide of war is receding, I would argue the bad decision supporting Mohamed Morsi and the Muslim Brotherhood and giving them F-16s and tanks and money!

He doesn't seem to understand radical Islam. And it keeps -- we keep getting back to that. You know, are we at war? Did he watch the beheadings? Is -- have they declared war on us? Do you think these are questions we'll get answered tomorrow?

PETERS: No. This is a president who refuses to do his homework! He also refuses to see what's in front of his face! He will not utter even now the words "Islamist extremism" or "Islamist terrorism." If you won't name your enemy, how can you defeat him?

I mean, this is -- it's frustrating, Sean. This is a president -- had Obama been president in December 7th, 1941, he might have declared war on Japan by 1943, and in Europe, he would have called the Nazis misguided central Europeans. You've got to call evil by its correct name if you want to -- if you want to begin to address it!

But again, I want the president to say the right things. I want him to take our breath away with his forthrightness and sense of what's right for America and what has to be done. He speaks well. He's a great rhetorician. Let him use that gift to persuade the American people that we really need to make a serious effort. But I fear that rhetoric may be all we get.

HANNITY: All right, Colonel. Thanks for being with us. Appreciate it.