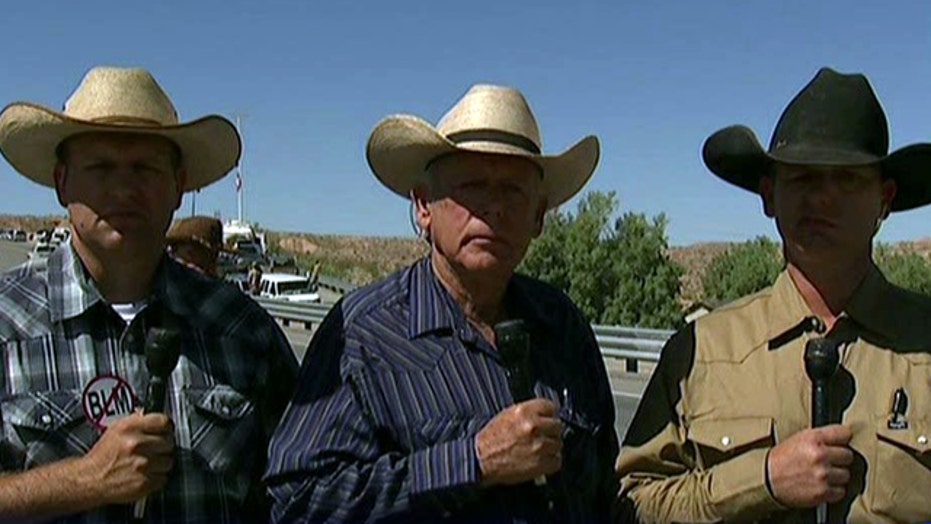 Cliven Bundy fires back after ranch standoff comes to an end

This is a rush transcript from "Hannity," April 14, 2014. This copy may not be in its final form and may be updated.

SEAN HANNITY, HOST: Back with us tonight, Nevadan rancher Cliven Bundy. We're also joined by his two sons, Ammon and Ryan. Guys, welcome back. Thanks for being here.

HANNITY: Cliven, let me -- first of all, on Friday, I was very, very concerned that this would end ugly. We heard the sheriff saying that the BLM, Bureau of Land Management, has ceased operations. You've gotten your cows back. Is that correct?

HANNITY: Well, let me ask you, because Harry Reid just spoke earlier tonight and he said that, well, it's not over. He said, quote, "We can't have American people that violate the law and then just walk away from it. So it's not over."

What is your response to Harry Reid?

HANNITY: You said that to the sheriff, Cliven. You said to disarm the Park Service, meaning the Bureau of Land Management. I mean, there were, what, 200 people surrounding your ranch and there were snipers and -- I mean, it was really a precarious situation there all weekend up until this got resolved, right?

CLIVEN BUNDY: Yes. And if the county sheriff had have taken away the weapons from the BLM, those patriots (ph) would not have to march before these guns. And that was -- that's a terrible thing to put American people in that situation, and -- but they did.

HANNITY: Is your contention that this is state land and that they have no authority or business being there?

CLIVEN BUNDY: They have no authority.

CLIVEN BUNDY: I don't know that the...

CLIVEN BUNDY: Well, I haven't heard from the county commissioners, and the media hasn't reported back to me, so I don't know whether they got tore down or not.

HANNITY: Yes. Ammon, you're one of the people that actually got hurt in all of this in this confrontation, and we saw the dogs and we saw the tasers being fired and we saw women on the ground. You got hit with a taser, what, three times, Ammon?

HANNITY: Yes. How many other people were hurt in this?

AMMON BUNDY: Well, there was a few other casualties. But Sean, I'd do it again. And after it was all over, I couldn't have felt better.

HANNITY: What is your response to Harry Reid saying tonight that this is not over? It seems to me like he's making a threat that they're going to come for your dad.

AMMON BUNDY: Well, if he doesn't have enough moral fiber in his bones at all to see what happened, that we the people got together and made something right, then I don't think there's any hope for him and he needs to be kicked out of office, even if he is the Senate majority leader. It doesn't matter.

HANNITY: What is your position, Ryan?

RYAN BUNDY: Well, I think that's pretty easy. I think we the people have spoken, haven't we? What is one man's word? Doesn't matter what position he has. But people have spoken and said this is no longer going to take place. So we don't fear Harry Reid. The people are here to say we will have our freedom, and that's what's going to happen.

RYAN BUNDY: The genie's out of the bottle. It's going to happen.

HANNITY: There's no doubt about it. From my perspective, as somebody that follows politics very, very closely, I think that they -- I think the politicians were watching this, Democrats in particular, and that they knew if something bad happened here, and they were the ones ratcheting this up -- I mean, we have rapist and murderers and bank robbers and pedophiles out there, and they've 200 agents, you know, surrounding your ranch because your cows are eating grass on land that they don't even want or need and that you're arguing isn't even theirs.

So they realized, I think, at some point, politically, that this was going to backfire on them. So I think this was done for political reasons. Cliven, do you see that?

CLIVEN BUNDY: Well, it's definitely done for political reasons. They wanted to show the American people in the world that they had unlimited power and they -- you know, they had taken over state sovereignty, our Nevada laws, our public lands.

CLIVEN BUNDY: Listen, do you think they really have taken it over? I don't think so. They might have took over our Clark County sheriff, but they never took over we the people, the sovereign people of this nation. We're standing and we're going to stand until we take the guns away from those bureaucracies, and then we'll start making America great one more time.

HANNITY: Did you lose many cows? I understand that some of your cows died.

CLIVEN BUNDY: I don't know how many, but some did die. We got about 27 calves that are without mothers, and they're little baby calves and we've been -- as ranchers, we've been trying to nurse those calves along for three days now, hoping to get -- keep them alive and hoping we can pair them back up with their mother.