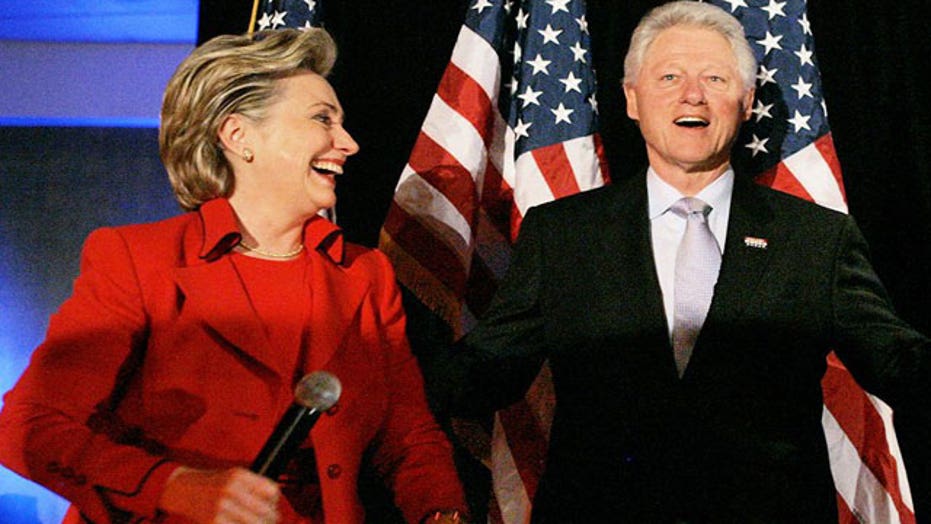 As you may know, a new book says that Hillary Clinton's tenure as secretary of state brought in millions of dollars to that foundation from foreign countries. The money is staggering. From the year 2001 to last year the Clinton Foundation has taken in -- ready -- about $2 billion. According to public records it spends about 88 percent of that on projects to improve people's lives.

But that leaves a staggering amount of money for expenses. For example, from 2002 to 2013 the Clinton Foundation spent about $70 million on travel alone -- $70 million. They go to Venus? Also the foundation has about 400 employees, a significant number.

Once again joining us from Washington, Charles Krauthammer. I just got. This is really interesting. Just got this.

General Electric CEO Jeffrey Immelt, our old pal, says he will not release the e-mails GE exchanged with secretary of state Hillary Clinton during the period which GE was donating money to the Clinton Foundation.

Here's the deal. Clinton lobbied the Algerian president to pick General Electric as a contractor for Algerian power plants, which the Algerians did. Additionally -- in addition, Boeing and Chevron also got contacts in Algeria and they gave money to the foundation as well, both concerns. And the Algerian gave the Clinton Foundation $500,000.

What am I supposed to think here, Charles? Tell me what to think.

KRAUTHAMMER: Well, you can connect the dots any way you like. The problem here is legally you need to show an explicit quid pro quo, but we're not going -- we're not talking about here legal corruption. We're talking about sort of the moral corruption of the Clintons and this has been their story ever since going back to the sale of the Lincoln Bedroom.

O'REILLY: But this is big. This is big. It's acting secretary of state, all right, promoting.

KRAUTHAMMER: It's big and it's bad. But there's one problem for those of us who are concerned about it she burned the tapes. She eliminated the e-mails.

KRAUTHAMMER: I understand. But then you have got to get a legal case. You have to get a criminal indictment and you have to extract it. You can't ask a business just by the force of government to turn over private communications.

O'REILLY: Maybe you and I should go and take Immelt to lunch. You and I will go and say listen, Jeff, come on. You are a good American. Let's see those e-mails, you don't want corruption.

KRAUTHAMMER: you're going to make him an offer he can't refuse?

O'REILLY: Look, we have had a long go around with this guy for many, many years -- this Immelt.

Look, you know, the first story that we heard about was that Algeria gave a lot of money for the Haitian rescue after the earthquake.

This is a gigantic access influence machine. Again, there may not be enough evidence or explicit evidence of a criminal quid pro quo.

KRAUTHAMMER: I think what you need is specific evidence of an explicit quid pro quo. And my guess is that the Clintons have been at this for 25 years. They are very experienced. They are very smart. They cover their tracks. They've been here before and they burn the tapes. The evidence is gone.

O'REILLY: I think you can subpoena GE and ask for those e-mails, could you not? Go 00 the FBI go to GE and say I would like to see e-mails. We are conducting a federal investigation? I think you could do that.

O'REILLY: You know, the grounds are that there may be some kind of corruption that took place. I mean you know how investigations are.

KRAUTHAMMER: Yes, but maybe some kind of corruption.

O'REILLY: You don't charge with a crime and then investigate. You investigate first and then charge.

KRAUTHAMMER: Yes, but then you could sniff around every senate office in the world and say you're looking into --

O'REILLY: But this is big.

KRAUTHAMMER: Yes, it's big but again you have to have a little bit more than that to go to a criminal case. It's in the criminal case where you would be able to issue subpoenas. In the absence of that, the Clintons are clever. They cover their tracks.

O'REILLY: All right. Charles Krauthammer, everybody. A big footnote: Charles' bestseller "Things that Matter" out in paperback on May 12th.