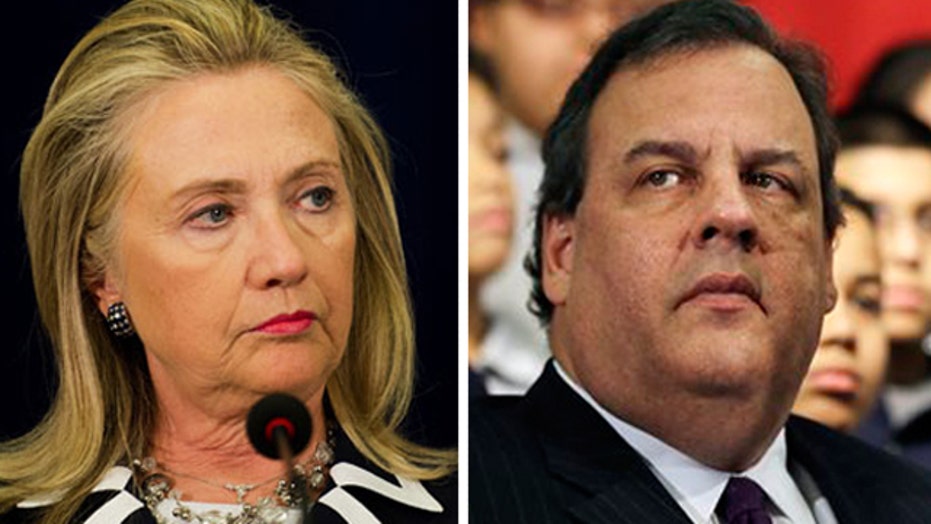 Christie vs. Clinton: Which scandal is more damning?

This is a rush transcript from "Hannity," January 9, 2014. This copy may not be in its final form and may be updated.

SEAN HANNITY, HOST: The mainstream media hoped it would be a real juicy story to lead their liberal newscasts. The Democrats, they wish it would be his demise. But the Jersey Governor Chris Christie, and his administration's involvement in the closing of a couple of lanes of the George Washington Bridge that led to a traffic jam back in September, does not compare to the scandals that are plaguing the Obama administration.

Now, you're not going to hear this in the mainstream media. In particular, the Benghazi coverup. Let me explain why. Earlier today, just 24 hours after learning that one of his top aides was involved in ordering lane closures over some sort of political revenge, Governor Chris Christie came out and he did what any leader should do when they discover improper behavior in their ranks.

HANNITY: Think of that! That word, those words, "I apologize." Now, that's a phrase that nobody in the Obama administration seems to know. They never say it. For example, remember when then secretary of state Hillary Clinton was pressed for answers about what she knew and when about the Benghazi terror attack? Remember, that attack left four Americans dead. Here was her response.

FORMER SECRETARY OF STATE HILLARY CLINTON: The fact is, we have four dead Americans!

CLINTON: Was it because of a protest or was it because of guys out for a walk one night who decided they'd go kill some Americans? What difference, at this point, does it make?

HANNITY: It makes a big difference. But that's not all. That's also another key thing to point out here. Governor Christie had the moral courage in this situation to actually let heads roll. Watch this.

HANNITY: Now, that's not what happens when you work for President Obama. Now, after the Benghazi terror attack and Ambassador Susan Rice misled the American people -- well, she went on five different Sunday shows to blame the attack on a YouTube video, which, by the way, wasn't true. And this is what happened to her.

PRESIDENT BARACK OBAMA: Put simply, Susan exemplifies the finest tradition of American diplomacy and leadership. So thank you, Susan, for being willing to take on this next assignment. I'm absolutely confident that you're going to hit the ground running.

HANNITY: Oh, she got promoted to become Obama's national security adviser. Now, that would be like Governor Christie promoting his fired aide to be the next New Jersey commissioner of transportation.

Now, the bottom line, the administration holds no one accountable, not when it comes to the botched ObamaCare rollout, the IRS enemies list, the NSA spying scandal. And remember Fast and Furious? Well, that controversy -- nothing happens there. So they may want to re-think this attack on the New Jersey governor.

Joining me now with reaction from the American Center for Law and Justice, Jay Sekulow, former Pelosi and Obama adviser Ellen Qualls is with us.

Ellen, as we look at -- Susan Rice wasn't fired. Nobody was fired over the Fast and Furious, $600 million, three-and-a-half years, the botched rollout of ObamaCare, Kathleen Sebelius is still there, Eric Holder is there.

ELLEN QUALLS, FORMER PELOSI AND OBAMA ADVISER: Well, I think it's a unique day to be on your show, Sean, because usually, I'm debating between people who believe government has a role in people's lives and a party that believes it doesn't. And today, we're seeing a Republican leader whose top staff, if not himself -- and we don't know -- actually believe that...

HANNITY: I asked you a question...

QUALLS: ... government had had a role in shutting down...

HANNITY: I asked you a question!

QUALLS: I don't think Kathleen Sebelius should have been fired. I think she's doing a good job.

QUALLS: The larger reality is...

HANNITY: Should he have been fired?

QUALLS: And there's no smoking gun...

HANNITY: ... shouldn't have been fired?

HANNITY: And Lois Lerner shouldn't have been fired, either?

QUALLS: Why are we talking about Lois Lerner?

QUALLS: Why are we not talking about the news of the day, Chris Christie?

JAY SEKULOW, AMERICAN CENTER FOR LAW AND JUSTICE: here's why we're talking about Lois Lerner. Glad you brought that up because today, the Department of Justice -- information came out that the person that the Department of Justice, Eric Holder, put in charge of the investigation by the FBI of the IRS is a major donor to guess who? President Obama. So so much for the nonpartisan review of IRS action that was targeting in this particular case acknowledged conservatives. So that's why we're talking about Lois Lerner.

You know, Sean, here's something else. There's a difference between the way Chris Christie manages and this administration, their current president manages. Chris Christie realizes that bad news does not get better over time. I took some courses at Vanderbilt in executive governance, and that's exactly what they say. You got to move quickly. He was decisive. He held those accountable responsible. He took immediate action. The president -- his response is to promote the people that caused the problem!

SEKULOW: That's the difference between their leadership styles. And to make...

QUALLS: Governor Christie took action after e-mails revealed how culpable his administration was.

SEKULOW: As soon as he found out...

HANNITY: All right, but here's the...

SEKULOW: ... one hour to respond. If he didn't get response, he took action, exactly what he did. Vanderbilt would say textbook perfect.

SEKULOW: That's how you lead!

HANNITY: I've been very critical both on radio and TV of Governor Christie, Jay. He fired people here, and I bring up these other scandals because it's so partisan in Washington right now -- Benghazi, Fast and Furious, the NSA, the IRS -- nobody fired. This -- he went out and held nearly a two-hour press conference today. Obama wouldn't -- I don't see Obama ever doing something like that. He left himself...

HANNITY: He left himself no wiggle room, so if an e-mail pops up that he was cc'd on...

HANNITY: ... he's finished. I thought it was a pretty ballsy move and some -- really refreshing to see a politician take responsibility. Isn't that what defines the difference here?

SEKULOW: Of course. You know, Chris Christie, we should not forget, he's governor of New Jersey, but he was also a U.S. attorney. And he understands that when you make a statement like, I'm taking full responsibility for this, holding those accountable, but I was not aware of what was going on -- he knows the consequences of that.

So I would be stunned if something becomes, you know, a new revelation on Chris Christie. I doubt it. You may agree or disagree with his policy, but this was decisive, direct, swift action in a situation...

SEKULOW: But to compare "What difference does it make," Secretary of State Clinton, to what Chris Christie did, I can't even imagine that that's in the same discussion! And of course, this takes all the focus off of guess what, a new book out criticizing the administration's...

HANNITY: Ellen, is -- will you not give him any credit for what he did today?

But I can tell you, I've worked in government longer than I've worked on the political side, and I can't imagine a moment where one or more employees together would decide that it's OK to shut down lanes on a bridge that ended in -- there was a 91-year-old woman who passed away...

QUALLS: ... because emergency responders couldn't get to her.

HANNITY: ... of that woman -- the daughter of that woman said she did not believe that had anything to do with her mother's death. And that just...

One last question for Jay, and this is more political. You know, maybe there's a lesson here for Christie. He's positioned himself as being a go along, get along guy, bipartisan, the big hug of Barack Obama, I can't think of one Democrat that he's reached out to, that he's tried to work with. Have any of them given him the benefit of the doubt or come to his defense today? Do you think there's a lesson here for him?

SEKULOW: I think there is. And that lesson is, look, you know who your friends are, you know who disagrees with you politically. But you've got to say at the end of the day, as you've said, Sean -- I mean, there's policy disagreements that you can have with Governor Christie. Those are legitimate to be discussed and debated in the marketplace.

But the reality is, I don't think anybody and no Democrat that I know of has reached out to him and said, "You took decisive, swift action and apologized, "a word that you never hear out of this administration in real context. They always initially apologize, but then they back away and call it phony scandals.

SEKULOW: But Chris Christie took it on the chin. He took a direct punch and he responded the way he should. He took swift action against his senior staff that he felt were responsible for this. And look, he took it on his shoulders. So this was -- this was exactly how you make a tough decision when you have a situation like this. He did it textbook perfect. And he's not going to get any accolades from the Democrats on this, although he has, as you know -- he has some support from Democrats politically. But on this one, stone silence.

SEKULOW: Why? Because now we're not talking about guess who's book. That's what the problem is.

HANNITY: All right, guys, thank you both for being with us. Appreciate it. By the way...

HANNITY: ... interesting fun fact. In less than 24 hours, the three major networks devoted 17 times more coverage to the traffic scandal with Governor Christie than they allowed in the last six months for the IRS targeting of conservatives.