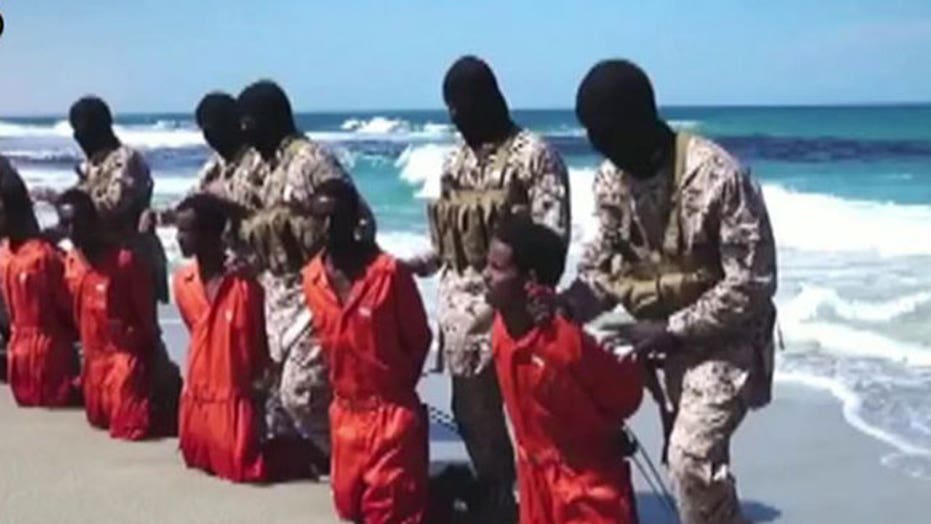 Joining us from Washington is Miss Powers, whose new book, "The Silencing: How the left is killing free speech" will be out next month.

So tell the folks what you wrote, Kirsten.

KIRSTEN POWERS, FOX NEWS ANALYST: Well, I wrote about something that's been going on for a while. I've written a lot on it, but I feel like it's really reaching a critical tipping point which is Christian persecution in the Middle East and northern Africa, and it's something that President Obama has really been largely been silent on. And I sort of pegged it off of this press conference he had with the Prime Minister of Italy where the Prime minister was asked about 12 Christians who were thrown overboard for praying to Jesus and the President said nothing, express no outrage even though the topic was raised and he could have easily addressed it.

O'REILLY: But the Italian prime minister said he didn't think that the Christians were drowned because of their faith -- which is insane, because they were thrown overboard in the Mediterranean Sea, all right, by Muslims. What other reason would there be?

POWERS: And they were praying.

So -- and in fact, the Italian authorities arrested the men, the Muslim men and charged them with a hate crime, essentially.

POWERS: I don't think it would be him saying he was wrong because this is an issue -- this is a completely separate issue. I think the fact is, that there's an ethnic or a religious cleansing going on right now that he should acknowledge, and yes, I do expect him to acknowledge it. And I think he should be pressured to acknowledge it.

O'REILLY: But he was wrong not to acknowledge it in the beginning. So he would have to say he was wrong.

POWERS: No, I mean I think he has said these sort of, when he's under pressure, he will talk about religious persecution but he will always lump it in. Oh, Muslims are persecuted and Christians are persecuted. He won't acknowledge what's actually happening in the Middle East.

O'REILLY: Yes. Moral equivalency -- there are no Christians hunting down Muslims in the world so the moral equivalency argument is foolish. He has to go back thousands of years to pull out the inquisition and the crusades. It's insane.

So now why do you feel this is so important? What is it about you, Kirsten Powers, that has put this killing of Christians abroad to the top of the list?

POWERS: Well, as you know, Bill, I care a lot about human rights in general. I think this issue is near and dear to me because I was married to somebody who is a Coptic Christian. I'm still very close to him and his family. And they're in Egypt. And I spent time there and I feel a real connection. So when I see these people, when I see these Coptic Christians being beheaded I see family essentially.

And so I really was educated also by spending time with people who are in this region, and I think a lot of Americans don't really realize --

POWERS: -- how many Christians are over there and what they endure.

O'REILLY: And terrified. We have a Coptic Christian on our staff here at The Factor, and Christians living in these terror-ridden countries are absolutely terrified. At any time they could be murdered just because they have a cross around their neck or they're saying a prayer. That's how bad it is. And the leader of the free world says nothing.

POWERS: That's true. I mean He's been very -- I mean, nothing -- he occasionally will say something when he's sort of pressured but --

O'REILLY: Nothing, Kirsten -- nothing.

POWERS: He has not made it a priority. And he has not also made -- not just talking about it but doing something about it, in terms of providing aid and help to the refugees, the Christian refugees, you know -- it's a horrible situation.

O'REILLY: Nothing. He hasn't done anything and said anything. And he's not alone. Many American Christian leaders absolutely silent as we have pointed out in the past.

O'REILLY: All right. Kirsten -- thank you.