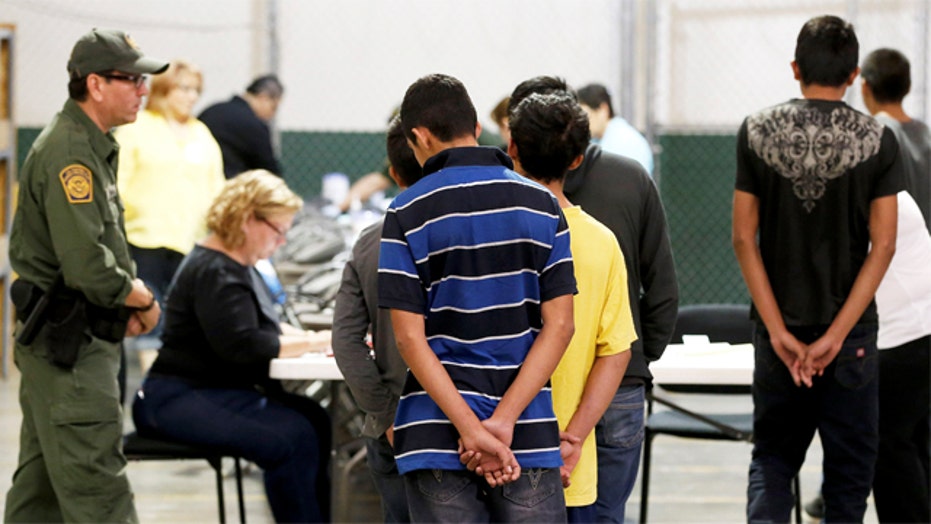 Can problem-plagued US cities handle burden?

MAYORS OF PROBLEM-PLAGUED CITIES UNDER FIRE FOR HOUSING ILLEGAL IMMIGRANTS

MICHELLE FIELDS: Where are they going to get this money? Illinois has $300 billion in debt. They are hundreds of billions of dollars in unfunded pension liabilities. How is sending illegal children to a war zone, because that's basically what Chicago is, how is that any better than where they are coming from? Fourth of July weekend alone there were 82 stabbings in Chicago. Rahm needs to focus on the high unemployment in Chicago, the crime, instead of pretending that he's Mother Teresa when we know he's not.

JONATHAN HOENIG: I don't want to pay for them. Eric, Chicago is full of immigrants. It's the fifth largest Hispanic population in the country. These so-called illegals actually produce. They bus tables, they clean people's houses. A lot of Chicagoans want to hire them because it betters their lives. The problem isn't immigrants. The problem is paying for them and no one has a right to free housing like mayor Rahm is proposing. If the problem is paying for illegal immigrants, make them legal, problem solved.

JEHMU GREENE: Absolutely, it is wise to be taking these kids right now. No doubt about it. For one reason. God bless us, we are Americans. These are children. We have done this before as a country. I absolutely agree with our colleague George Will, who on Fox News Sunday said that we have over 3,000 counties in this country. That would be around 20 children per county. This is something we can do. And on the broader immigration issue, if we did actually welcome all of the undocumented immigrants and make them legal, our economy would benefit by billions of dollars. By not doing it, we have lost $900 billion.

WAYNE ROGERS: Well, I find this whole conversation somewhat depressing. I don't know how people -- my colleagues, all of you, how you can embrace something that starts with the word "illegal". You have nowhere to go. If they are illegal, they are illegal. If I suddenly say "I'm going to take all the bank robbers in the United States and all the murders and make them legal," that's crazy. You can't have this conversation. In other words, we have in this country people who have gone through the process, legally, it's a discredit to them.

WAYNE ROGERS: I think you have to blame the congress. When you go all the way back to before the collapse in 2007 of the banking system. The thing is, Eric, the first part of that, 2002 to 2007, it actually o expanded. Most of that drop occurred after 2007, and most of it was related to the collapse of the housing market because that's where most people's net worth was. If you identify where it came from, it came from the depreciation of those values people had in their homes. If you go beyond that, you can't find a heck of a lot of decline.

JEHMU GREENE: Well, Eric, I want to get away from republicans and democrats on this one because who do I blame? The people who sing that song "for the love of money, you will steal from your mother, you'll rob from your brother." Who is doing that? The folks on Wall Street. CEOs whose salaries have increased 800 percent in the last 30 years. Productivity is up, profits are up and how have they thanked their workers? Let's focus on the income part. Why aren't incomes growing? Because CEOs have not done anything to support their workers. Now back to politicians, conservatives say "we are not going to raise the minimum wage" which would raise all wages. First it's the Wall Street folks, second it's conservatives.

CELEBRITIES UNDER FIRE FOR BASHING ISRAEL'S WAR AGAINST HAMAS

MICHELLE FIELDS: I don't understand why these celebrities think just because they're famous that they're smart, and they should be talking about politics. Like you said, they should stick to their bad TV shows, their bad music. They should leave politics to us here on Cashin' In, and to the Cashin' In folks on Twitter.

WAYNE ROGERS: I don't blame them, I blame the press. Why would the press go do that? You wouldn't go to a brick layer to get your teeth fixed, for God's sake. Why would anybody go to Hollywood celebrities and expect them to expound on foreign policy that made any sense? It's dumber than a box of hammers. I blame the press.

JEHMU GREENE: Lord knows we don't need more pundits, but this is America. They have every single right to do that, and they're putting their brands on the line. So I think that says a lot about how seriously they take this. I don't understand why so many people think that just because you have makeup and a microphone, never worked in politics, that you have something to actually offer to the conversation. That's not just a celebrity problem.

JONATHAN HOENIG: Some of them, I think Joan Rivers, for example have been on the right side of this. I guess that's what amazes me. How come so many celebrities are on the wrong side? You've got Israel, a Western, modern country committed to free speech, committed to gay and lesbian rights, committed to freedom and individual rights. On the other hand you have this tribal, Islamic savagery that is the Middle East. So I'm all for people having a political opinion, they should just have the right one and support Israel during this conflict.