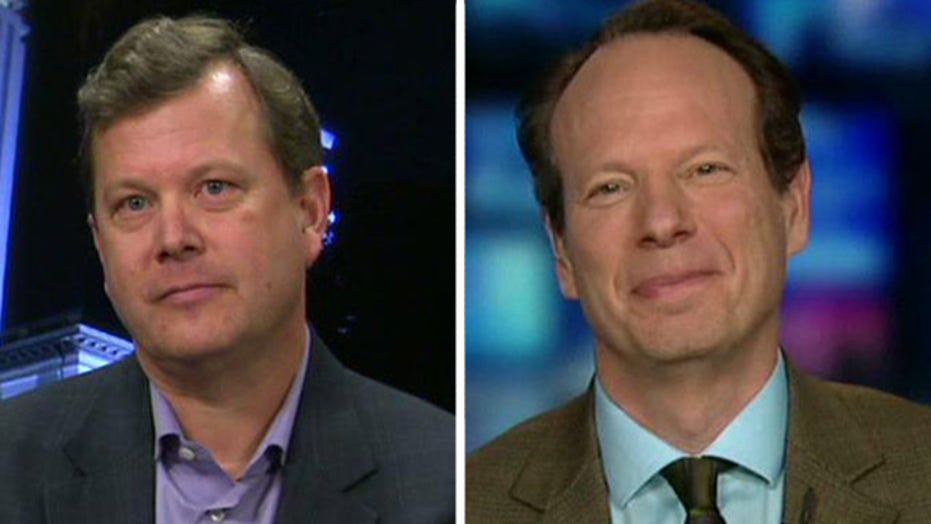 This is a rush transcript from "Hannity," January 2, 2014. This copy may not be in its final form and may be updated.

ERIC BOLLING, GUEST HOST: There's another milestone to report on related to 2014, because at the year's end, Congress let a package of 55 popular tax breaks expire, even though they help save average Americans and businesses billions of dollars.

To find out more about this decision to raise your taxes, you can head over to the Hannity Facebook page. And as always, we want to hear from you over the course of the next hour on Twitter, using the hashtag #hannity.

Joining me now to talk about the arrival of ObamaCare and those expiring tax breaks, from the Government Accountability Institute, Peter Schweizer, and the Third Way senior VP and co-founder Jim Kessler.

Peter, I want to start with you. Let's start with ObamaCare first. Boy, horror stories -- part of the marketplaces was -- were holding back some of the payments to the institutions. Pretty soon, we're going to hear more and more of these stories, are we not?

PETER SCHWEIZER, GOVERNMENT ACCOUNTABILITY INSTITUTE: Yes, we are. And you know, here's the reality, Eric, is a lot of people say, "Well, this is a problem with implementation." The fact is that ObamaCare is basically doing what it was designed to do, which is to drive people into a certain select number of insurance programs. And of course, the insurance industry likes this. So you know, when people say it's a failure of implementation, it's not. This is what it's designed to do.

And you're quite right, it's only going to bet worse. We're dealing right now with the individual mandate, 4.7 million people have lost their coverage, according to Health and Human Services. Next year, the employer mandate kicks in. And the White House has said that they estimate probably a minimum of 6 million will lose their coverage in that. So this is only the beginning.

BOLLING: Jim, and I guess if the White House estimates 6 million, it could be multiples of that. What happens as we go throughout this year and people who were thrown off their coverage and can't get other coverage -- what happens to them? They're going to flood the emergency rooms, aren't they?

JIM KESSLER, THIRD WAY SENIOR VP AND CO-FOUNDER: Well, I mean, look, let's be clear that the health care system wasn't working very well for the -- going on for the last 30 years. Health care has gotten more and more expensive and less secure. And people were losing plans and employers were dumping people, as well.

Look, obviously, ObamaCare for the first three months, they'd like a mulligan. And the first year is going to be choppy, I think there's no doubt about it, but I think...

KESSLER: Well, look, we're going to have to wait and see what happens with ObamaCare in this because it is just starting. But we have to move from essentially a pay-for-procedure health care system to a pay-for- performance health care system. ObamaCare takes some of those initial steps in doing it. I think there's more that needs to be done in this area. But health care costs for 30 years have been out of control. It's increased faster than triple inflation for 30 years.

KESSLER: I mean, there's been a problem.

BOLLING: Peter, the CBO scores some of these things, and what they've done since the health care bill was signed into law, they continue to increase the costs that it's going to cost Americans. I got to get you guys to put a number two it. Where are you now?

SCHWEIZER: No, I mean, I think that's exactly right. And here's the problem, Eric. This is another example of social engineering, where a group of smart people are going to redirect 20 percent of the economy, and they're going to do things that defy basic economics. We're going to increase demand for health care services by getting 30 million people uninsured in the current insurance system. But actually, by increasing demand, we're going to cut costs. It doesn't work that way!

SCHWEIZER: Yes, I mean, there's nothing changing! I mean, the one group that likes this -- and this is sort of the dirty little secret of ObamaCare -- while people are losing their coverage, the health insurance industry loves ObamaCare. Pricewaterhouse...

KESSLER: I wouldn't go that far.

SCHWEIZER: Look at the stock market!

BOLLING: We need to move on to the next topic. We talked about it -- 55 new laws are going to kick into effect starting next year. A lot of them are going to increase our taxes. Peter, let's start with you. It's estimated $54 billion tax increase to Americans!

SCHWEIZER: Yes. And this is classic, what happens in Washington, D.C. Both parties do it, unfortunately. And that is they're not going to do this without getting paid to do this. They put together a tax extender, like an R&D tax credit, for example. They extend it for two years. Why do they not extend it for five or ten years or make it permanent? Because they want to turn it into an annuity! They want the high tech industry in that particularly case to come by, give them campaign contributions, hire family members as lobbyists. It's horribly destructive for the economy, but it's great for the political class in Washington, D.C.

BOLLING: Jim, one of the areas that are being cut is the green energy business. There's tax incentives for them. I don't necessarily have a problem with that, but there are a lot of the other things -- home owners, teachers, college students and others. Their taxes are going up.

KESSLER: So look, I don't want to defend -- they're obviously too busy to pass some last year. Look, the problem is this. It's not that they want to get campaign contributions. That's not the reason why. The reason why is this. Everything gets scored by CBO, and these tax extenders, they cost a certain amount of money. And if you extend them for five year or ten years, which they should do, they need to find offsets for them. So instead, they extend them for one or two years so they can find fewer places where they need to cut spending.

SCHWEIZER: Yes, I mean, honestly, Congress never pays attention to the CBO. They don't base their policies on the CBO. Why would they...

SCHWEIZER: Yes, but -- but they find ways around it all the time. That's the bottom line. I mean, to think that...

SCHWEIZER: Right, but this is...

KESSLER: Because it's easier to get...

KESSLER: I'm not defending it. It's just the way it's done. I worked there for 12 years. That's the way it gets done. It's lousy, but that's how it gets done -- or doesn't get done.

SCHWEIZER: Well, I think there's a larger explanation that relates to how Washington works, which you don't get paid in terms of getting campaign contributions. Lobbyists don't get hired if problems are solved.

BOLLING: Right. There you go.

SCHWEIZER: So you keep the tax extender going.

BOLLING: That's the way the world works. That's the way it works especially in D.C. You got to keep your eye on those lobbying firms. Remember, there was going to be no lobbyists in the White House?

We're going to have to leave it there.