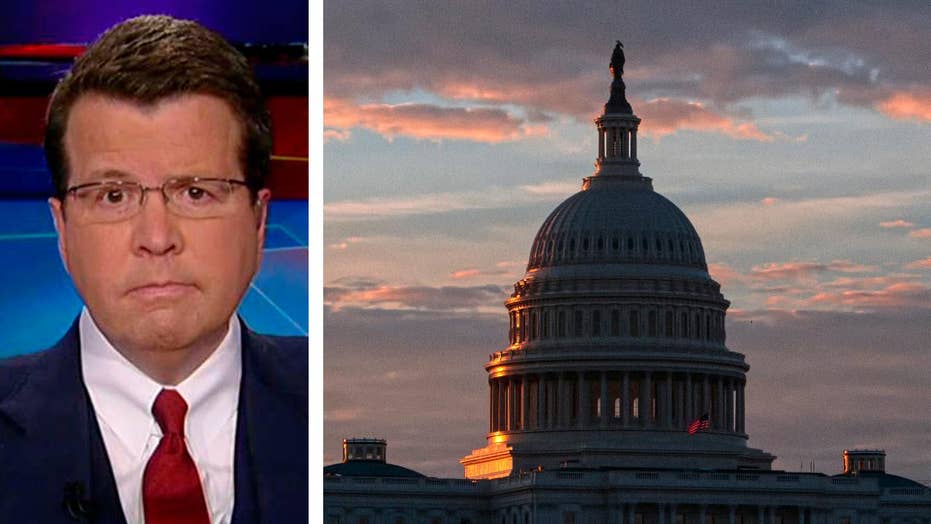 Republicans and Democrats are talking up ways around automation spending cuts that kick in in just weeks, because they've built-in cheating outs that are really weak.

As many of you know, I'm a fitness buff.

I've even shared my aggressive workout regimen on-air, to help as many of you as possible.

The way I look at it, if you poor saps can't stick to your new year's resolutions, maybe I can inspire you.

But alas, I appear to be an island in this vast ocean of broken New Year's vows.

What's really amazing is how quickly so many break those vows. In fact, 8 out of 10 of you won't even make it through the month.

And if you're Washington, you're not even making it through the week!

They're already plotting ways around budget resolutions that really weren't all that strict to begin with.

Back in 2011 they came up with something called sequestration spending cuts, that would automatically kick in if the will to do some cutting of their own pooped out.

I called it their spending 'backup back-bone.' if they couldn't muster the courage or discipline to make good on their promises to cut spending, automatic freezes on such spending would make sure they did.

Think of it like you emptying your refrigerator of all those Christmas goodies and holiday desserts just as you start a New Year diet. Your automatic way to make sure you're not tempted.

But think of Washington as running out to the grocery store and stocking up on all those goodies and keeping them in a safe place, just in case they get hungry.

That's how they handle their resolutions. Not only do they not stick to them. Time and again, they ignore them.

In 2013, and again in 2015, they raised the very budget caps that they themselves put i" to make sure those spending pounds wouldn't pile on.

In other words, they built in cheating.

And they're about to do so again.

Both parties are talking up ways around automation spending cuts that kick in in just weeks, because they've built-in cheating outs that are really weak.

Put another way, they're pre-cheating on resolutions they haven't even made!

And making sure they have a fallback if they fall back….which they always do.

Their way of keeping the spending spigot flowing as if it were a chocolate fountain forever spilling.

Thing is, they're doing it on our dime.

And may I remind you, that's a lot of dimes.

Try more than $20 trillion to date in a debt that doesn't end, namely because their spending, like that chocolate fountain, never stops.

Just a question. Why have automatic spending cuts at all if you automatically override them from even kicking in?

Each time. Every time.

It would be like me getting off that treadmill and heading right to the bake shop…as if! Like it'd even think of doing that!

Only difference is I'd be the one fooling myself.

These guys are making fools of us all.

Fat chance they'll ever wise up.

At least I made a resolution to change.

These guys made a resolution not to change.

Because they're already cheating.

But worse, cheating on a diet they never even started.

And blowing up resolutions they always resolved to ignore.

Normally when you and I start a diet resolution, the idea is to lose weight.

It's tough. No wonder so many of us fail.

Only in Washington do they put in writing a resolution not to ever really try.

No wonder they always fail.

And we're always the ones picking up the tab.

Must be nice to make resolutions you never plan to keep.

Almost as nice as thinking the poor saps you serve never take the time to notice.

Let this be the year, we do.

And fat chance, this time, we're going to let them get away with it.