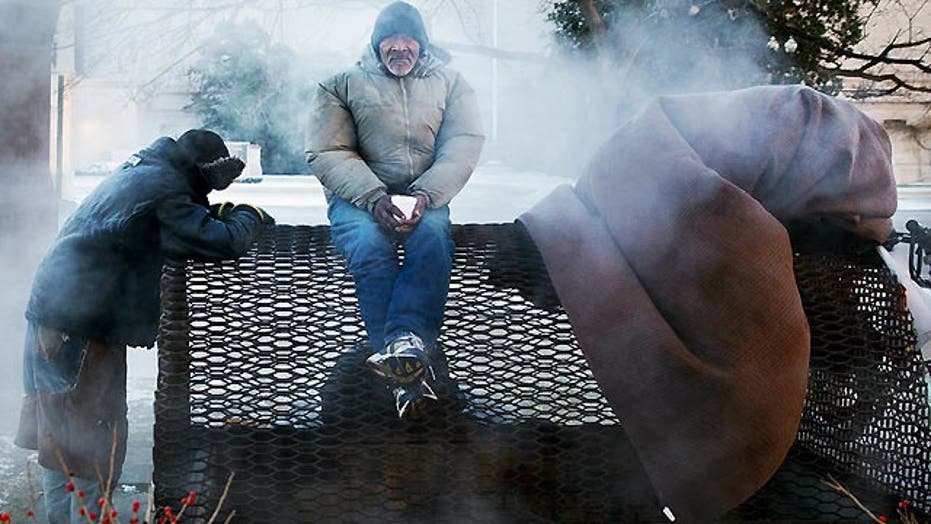 Cavuto: If this is victory in War on Poverty, what's defeat?

The poverty rate has come down, but not nearly enough to justify the costs

My friend Don Imus has a great line about prickly guests who don't take too kindly to his ribbing: "It's always funny until it's about them."

Don's right, because when I heard no less than Jon Stewart ripping Fox News over its coverage of the poor, it got my attention.

Here's why: He was talking about Fox, where I work. And it was Jon Stewart, who I like. I know this might sound crazy coming from a Fox guy, but I think Stewart is one of the quickest minds on TV today. He's smart. He's funny. He's thoughtful. And a tad to the left or not, I think he's fast on his feet -- even if he sometimes gives me a few good kicks.

That's fine. I can take it. But I can't take this: that we at Fox actually hate the poor? Even by Jon Stewart's Fox-bashing comedic standards, that's a little rich and more than a little unfair.

I can't speak for all my colleagues here, but none of us denies there are genuinely poor people or that we shouldn't genuinely help those who are poor. I just question whether all the folks we're supposedly helping are poor. That doesn't make me anti-poor, just "anti-beating our head against the wall doing the same thing again and again expecting a different result helping the poor."

Jon Stewart is much funnier and wittier than I will ever be. I'm just a numbers nerd, who's concluded all we've done to help the poor has proven a sad joke.

So forget the trillions more in debt racked up under Democratic and Republican presidents. I want you to focus on the trillions spent fighting a War on Poverty we're still losing.

I'm not saying our poverty rate hasn't come down a bit, but not nearly enough to justify the costs. Don't take it from me, take it from The Washington Post's Zachary Goldfarb, who calculated even that improvement isn't what it seems. That if you take out the myriad of government programs and policies that have mushroomed and become part of our social safety net, the actual poverty rate would be closer to 29 percent.

As Goldfarb explained, "It's hard to say we've won the War on Poverty when nearly one in three Americans lacks, without the government's help, the sustenance necessary to meet the basic needs of life."

Put another way, for this War on Poverty, if that's victory, please show me defeat.

Because minority youth unemployment is as high as it ever was and the cycle of government dependence is higher than it ever was. That doesn't mean those in genuine need still don't need our help, but it's pretty clear what we're doing isn't helping.

Just like spending all that federal money in Baltimore schools -- second only to New York City on a per-student basis -- isn't changing dismal conditions and test scores and dropout rates among students in either city.

That doesn't mean we don't help those who are hungry. But with nearly 46 million Americans receiving food stamps, do we have that many who really are hungry? 46 million?

Because if that's the case, forget the money, it's too late. We're already Mozambique!

I think Jon Stewart's right to say conservatives need to offer more of a solution than saying government's not the solution. And, as I've said on this show, maybe both parties working together is that solution. Like when Bill Clinton worked with Newt Gingrich on welfare-to-work. It worked because it got more folks working.

And in the end, isn't that what this is about: The government breaking the cycle of poverty by ending this cycle of folks depending on the government to keep them out of poverty? Forget whether that fosters dependency, it's economic lunacy. Just like bailouts and rescues are lunacy. I opposed them when we were doing them for banks in the last administration and everyone since; it's a cycle that knows no end.

Isn't that just as offensive when we do? And just as much a joke?