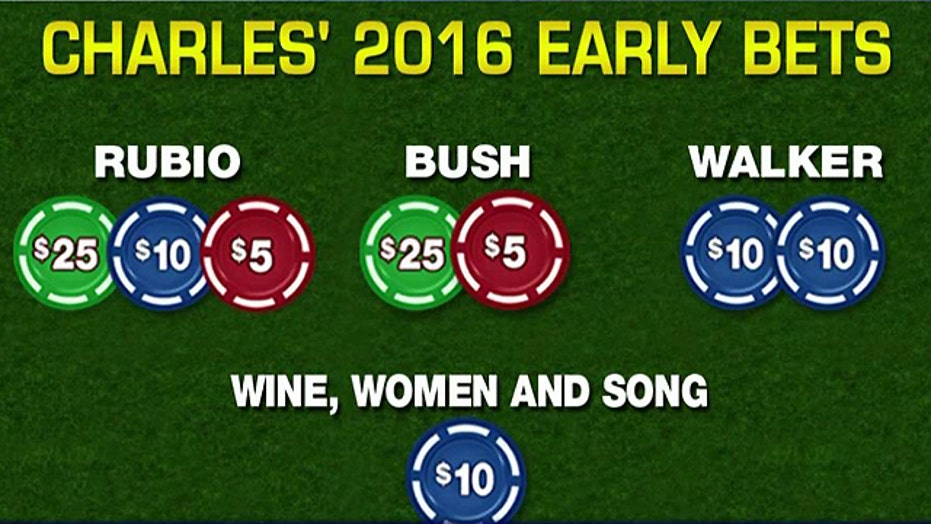 This is a rush transcript from "Special Report," May 8, 2015. This copy may not be in its final form and may be updated.

BRET BAIER, ANCHOR: It is Friday, and you know what that means. It is time for the Candidate Casino. We start on the GOP side of the house. A lot of people ask, why do you do this? Why do we keep on doing this casino? Because it actually draws the panelists out to say, you know, where they think things have shifted. And also you can play at home. We'll put up at least one of your choices. Steve, let's start with you, Republican field, where do you put your $100 in chips?

STEPHEN HAYES, THE WEEKLY STANDARD: As we've discussed, I believe that the fundamentals of the race are pretty much the fundamentals of the race. So there aren't these wild fluctuations in my bets every week, but I am I'm giving a little boost to Marco Rubio this week. I have him up to $40, $25 on Scott Walker, $20 on Jeb Bush, $10, still, on Ted Cruz, and $5 on some dark horse out of the field. And I think that's because Marco Rubio's had a couple good weeks since he announced. He's gave a good announcement speech. He's gotten some positive poll numbers. And I think what we'll learn is behind the scenes he has done quite a good job raising money at this time when people aren't yet seeing exactly what money has been raised.

BAIER: Well our viewer, Jammy, on Twitter agrees you, putting the most on Rubio, $35 on Rubio, but spreads it around. We don't like using dollar chips on this table, but we've let it in since it's a viewer. Walker $30, Paul, $15, Cruz $10, Jeb Bush $5, and Fiorina and there you see Huckabee and Graham, who says he's going to get in June 1. OK, Juan?

JUAN WILLIAMS, THE HILL: So I like the idea of Jammy being nice to those candidates, but let me just say, all that matters here is money and polls, and Bush is so far ahead at this point I don't get it. But anyway, $35 on Bush. Rubio's come up as we just heard from Steve, so I give him $20. Walker, still in the game at $15. That's the top tier. But then I go down to Cruz who's done very well with money. Paul who's the only one ahead of Clinton in some polls, and I just am being kind to Carson and Huckabee, keeping them in the game.

CHARLES KRAUTHAMMER, SYNDICATED COLUMNIST: Well, kindness is not my suit.

KRAUTHAMMER: Steve stumbled on the truth this week. He got Rubio at $40, which is exactly the right number. He's doing well, and there was an interesting poll that showed he came in rather close second to Bush in terms of who's your favorite. But on the other question, the broader question, who could you, which candidate could you support, meaning someone who would be a second choice, he was actually number one. I think he deserves to be up there.

Bush I have at $30, Scott Walker at $20, he's holding, and I don't see anybody right yet who will graduate to the stop tier. I think it will happen, still waiting out there, and because it's spring and because it's V.E. day, I'm giving a big 10 bucks for wine, women and song.

KRAUTHAMMER: Am I off the wagon or on the wagon?

BAIER: I don't know what you are. Let's go to the other side of the house, and this is the Democratic side of the casino, same dealer, and we have $100 in chips on the Democrats. Now when the issue of Hillary Clinton comes up, you have the e-mail situation, you have the funding of the Clinton Foundation. Now you have a new controversy about what she said before about immigration and what she says now about immigration. Take a listen.

HILLARY CLINTON, FORMER U.S. SECRETARY OF STATE: I will fight for comprehensive immigration reform and a path to citizenship, and I don't understand how anyone can look at these young people and think we should break up more families or turn away more hard workers with talent.

BAIER: OK, so obviously the new Hillary Clinton statement is much more in line with the Democratic Party, so that being said, $100 in chips.

HAYES: Well, we've seen her evolve on several issues now. I don't think that's fundamentally going to be her problem. I think her main problem is that she's not a great candidate. And that hasn't changed. I had $50 on her before, I have $50 on her now. Everybody in the world thinks that's low and I end up looking crazy. I have got the remaining $50 on the field, including the people who are in it. And if she really crumbles, potentially several people who are not in the field.

WILLIAMS: Steve is a seer, but I am a man who looks at the numbers, and I just look at the fundraising, I look at the polls, I think at all the controversies that have come and gone, and she's still in the polls beloved by Democrats, their primary voters. There's no way that she's not a winner.

BAIER: We don't see too many black chips on this table, but Juan has put it all there.

KRAUTHAMMER: The one you almost got it right. It's $95.

KRAUTHAMMER: On Hillary. And the reason is, I mean, I had her at $80 for a couple weeks. You know, her immigration thing is an announcement she's going hard left. Nothing is going to stop her. She is now left of Obama on immigration, which is way out there, which means she's going after the base, which means that Elizabeth Warren is not going to be getting in, which means she's got it sewn up. The five is for an act of God, and it looks as if he's otherwise occupied.

BAIER: All right, we play it every Friday. You can do it on our website as well, and send us your breakdown of $100 in chips. It's kind of fun.

That's it for the panel, but stay tuned for some pros and cons of celebrating mom this weekend.