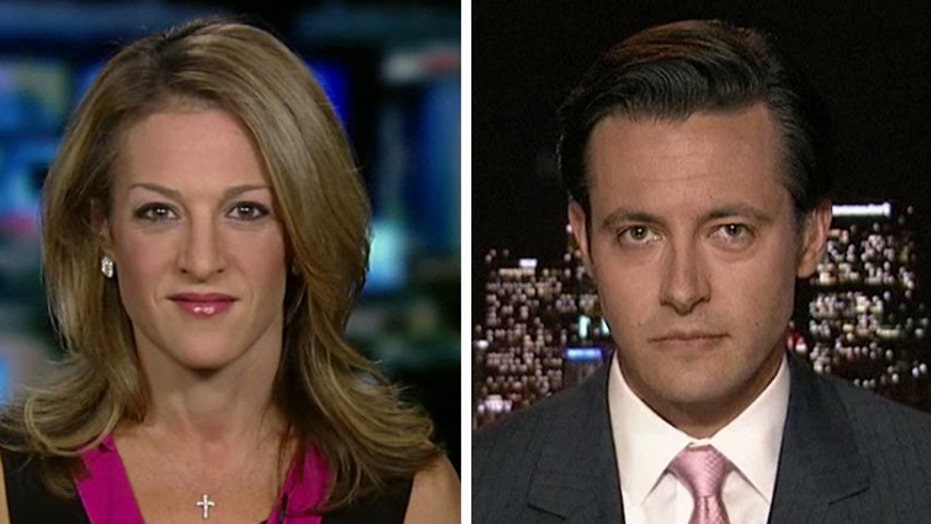 Can you really keep your doctors if you like them?

This is a rush transcript from "The Kelly File," October 21, 2013. This copy may not be in its final form and may be updated.

MEGYN KELLY, HOST: Back now to our coverage of the dramatic problems that have been piling up lately for the health care overhaul and a report from Kaiser Health News that is now getting a lot of attention. Kaiser says hundreds of thousands of Americans have been kicked off of their insurance plans in recent weeks because of ObamaCare, calling into question the president's promise that if you like your coverage, you can keep it.

Emily Miller is the senior opinion editor for the Washington Times, Mark Hannah is a veteran of two presidential campaigns and a democratic political analyst and adjunct professor of Media Studies at The New School.

Panel, welcome. So, Emily, let me start with you. Because this plan says, it is people who are on the individual market who, you know, they don't get in from their employer, they have to go out and provide their own -- buy their own insurance. And they are getting kicked off because ObamaCare requires all plans out there to meet a certain number of minimum requirements including that they provide for example, maternity care. A lot of these people had chosen cheaper plans that didn't have that stuff. That's no longer an option. So, was the president, you know, is his promise being kept?

EMILY MILLER, SENIOR OPINION EDITOR, THE WASHINGTON TIMES: No, Kelly, it's not. I mean, President Obama said in 2009 if you want to keep your health insurance plan you can. If you want to keep your doctor, you can. It's patently false. We have seen already hundreds of thousands of Americans have gotten letters from their health insurance company the past few months saying, sorry, you're off the plan. We're going to put you into this plan if you don't give us another choice, if you don't decide, we are putting you into this plan. And so families around the country being faced with exurban at new costs that they weren't planning on in order for this whole system to work out to cover this unemployed people who need to -- uninsured people who need to get coverage.

KELLY: And Mark, the reports are, I mean, for example, blue shield of California sent 119,000 cancellation notices out. If you go through the list, I mean, it goes on and on and on. Florida Blue terminating 300, 000 policies. Kaiser Permanente in California sent notices to 260,000 people insure a high mark in Pittsburg dropping 20 percent of its individual market. I mean, the list goes on and on because they're saying, look, you know, we can't comply and so, you're out.

MARK HANNAH, DEMOCRATIC POLITICAL ANALYST: Yes. And what the Affordable Care Act does, Megyn, is that basically takes his plans that are really predatory plans. It sets a baseline for what can be, you know, what an insurance plan has to offer. And if it doesn't offer those things, then absolutely, you know, these are companies that are booting people off because they are crummy plans. You know, just as though, when people are buying home loans, if those loans were predatory. If we had more regulation back then, we wouldn't have gotten into the 2008 financial crisis.

KELLY: What if I liked my crummy plan? You know what I mean --

KELLY: We had a dad saying, you know, look, we are done having children. There is a reason I didn't pay extra for maternity care. You know, I'm fine with that crummy plan.

HANNAH: Right. There are basic parameters that you have to have. Insurance companies can't discriminate against people with pre- existing conditions. They need to provide for, you know, for women's health and preventative care and certain things like that. So, people are getting --

HANNAH: They are able to go to the health care exchange and get these affordable plans that actually accommodate all these sort of bare minimum requirements.

KELLY: OK. But in there Emily, he is conceding that people are getting kicked off of their existing plans they did like.

MILLER: And listen, we're Americans. And we like to make our own decisions about our lives, our finances, our families. You know, I just was talking to a childhood friend of mine Robin today. And her family, they are small business owners, they've got three kids. They chose a policy that had a high deductible and a low monthly premium because that worked for their finances. She said, we have always paid our bills, we've always worked hard. This is what we chose. They got a letter from Blue Cross/Blue Shield of Maryland. And it said, you're off. We will either appoint you to this one which costs double or you can go into the ObamaCare exchanges. So, she's now forced into a new policy that has a higher --

MILLER: And to explain exactly the difference of what she gets -- prescriptions. Her three kids don't use prescriptions. They haven't yet. So, she's paying double for something that she's not using. That's how the whole system is working.

HANNAH: The president said all along that there are certain plans --

KELLY: If I want to pay less for a less great plan, isn't that my right? I mean, what we are seeing now is that right has been taken away from hundreds of thousands and perhaps millions of Americans.

HANNAH: Look, there is a sucker born every minute. And do you have the right to go out and buy something that, you know, some swindler is trying to sell you?

KELLY: But Robin is very happy with hers. She wasn't being swindled.

HANNAH: Yes. You know, look, all along the president said, you can keep your plan. But he also said -- and he was extremely honest with the American people, there are certain baselines below which insurance plans can't be offered. There are certain types of crummy plans that are now going to be illegal because they prey upon people's lack of information when they are signing up for an insurance plan.

So, under the ObamaCare exchanges, my good friend Sally Cohn who I know you know, she saved her family $5,000. And yes, there are hiccups, and there are all sorts of glitches with these online exchanges. But the people and Emily's friend who was kicked off and is offered a more expensive plan, can also go to her exchange and find a less expensive plan.

I have to go. Thank you both so much for being here.