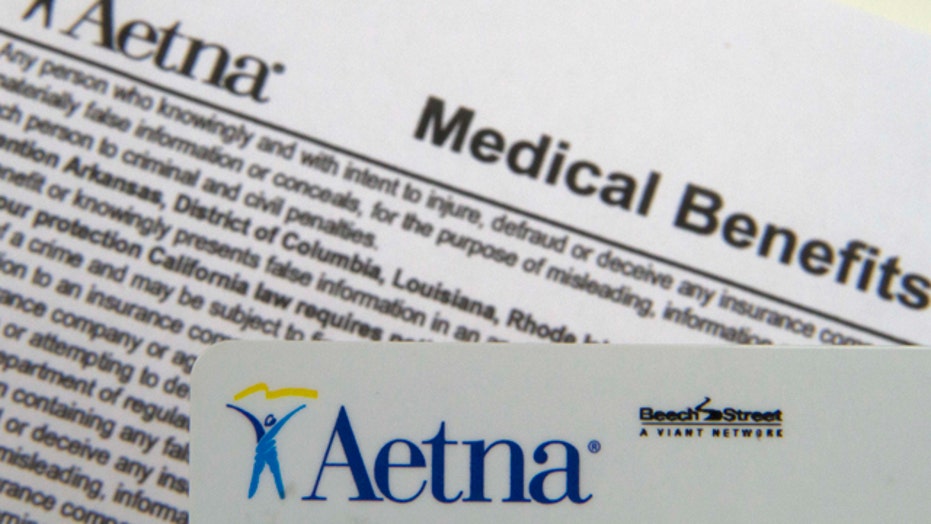 Can you keep your health care plan under ObamaCare?

JOHN TOBACCO: I mean, after years, literally the last three years, Barack Obama's been telling Americans, "You won't lose your doctor, if you like your health insurance, you can keep your health insurance," now post-election, surprise! 7 million Americans, the numbers are going higher. The CBO reports the dollars continue to go higher and really what it comes down to, we cannot afford this. Small businesses can't afford to keep medicating their people and keeping them insured and at the end of the day this is just another sign of big government coming in with big plans that us, the taxpayers, just can't afford.

STEVE MURPHY: This plan is going to cover just about everybody. It makes a difference whether they get their health insurance through an employer or whether they get it through an exchange or some other way, through Medicaid. As a matter of fact, having employer-based health care is bad for American business period. It hurts our international competitiveness. We would be better to move away from that system and replace it with something else, with guaranteed coverage for everybody.

JOHN LAYFIELD: I think free pizza for everybody. Let's just get the rich kids to pay for it, isn't that what the student council ran on this last election.

JONAS MAX FERRIS: You know, it isn't going to be raised that much because there are offsetting taxes to increase some costs and there's going to be increased costs and we've seen from the taxes - more taxes in a few years. If they want to kick you off because there are cheaper government plans, it exists because of the tax loophole and companies can buy your insurance and not have to pay tax on it as a salary. So, I don't think it's bad. In fact, it's one of the good effects of the affordable health care act and many others aren't as good so I think it will ultimately put more insurance in people's hands and they will be competitive. The notion you don't have to pay your own insurance bill is largely one of the health care cost is rising and you don't see the bill and your company pays for the cost of it.

GARY B. SMITH: Well, I don't think it's going to be any surprise to the Obama administration. I think eventually, Brenda, we'll all be under one government health plan. Here is why. As John pointed out, the costs will be pushed more and more to people right now that can pay their insurance premiums. I have blue shield, my premiums will go up, and they have gone up. And eventually, I'm just not going to keep paying higher premiums and I'll sign up for the government exchange. Multiply me by 100 million people that are paying or whatever the number is and eventually we'll all concede and it will be like the resistance is futile and the government will then clamp down on cost and doctors will have less incentive to enter the medical field. Supply of medicine will decrease just like it has in the U.K.

LAWMAKERS RAMP UP RHETORIC AS AUTOMATIC SPENDING CUTS NEAR

GARY B. SMITH: The best thing I think that could happen. You know, Obama should go back to his purge on the billionaires saying they should give more. Because in this case, Brenda, for the past five years, the government has been the billionaires, during the first two years under the Obama administration, discretionary spending increased 84 percent. It's toned down a little bit, thankfully, but even if you include hurricane sandy relief it's 30 percent. So we're talking about such a large space than this -- these cuts amount to one half of 1 percent of the GDP. So, Brenda, the other question is, is it going to hurt the economy? Bill Clinton, who the democrats love and also admittedly some republicans cut discretionary spending from 22 to 18 percent of GDP and what happened in the economy? This is the way to kind of tighten the belt; I think is the best thing that could happen.

JONAS MAX FERRIS: You know, Brenda, some cuts are better than no cuts, I'll give you that, but this is no solution, it was supposed to be a backup plan for doing something smart and it is to the speaker's point, arbitrary, a bit of a meat ax and doesn't cut enough. And it will seem like we solved the problem like we did with the tax, but yet the budget deficit will not go away under any form of the decade. It's got cuts and some things are being cut. This doesn't save necessarily anything for the government if it's arbitrary cuts. You've got to be careful about the larger cuts that don't hurt revenue earnings potential of the U.S. Treasury.

JOHN LAYFIELD: Yeah, but it's nothing. Brenda, we've got to look at this. What Jonas is talking about is spot on. These guys run on tax increases and what they did was extend the Bush tax cuts. They ran on spending cuts and having to--over the next decade, we're running trillion dollar deficits, by the CBO and President Obama's budget in ten years from now talking about cutting 1 trillion out of that $48 trillion. This is absolutely nothing. It doesn't even move the meter.

STEVE MURPHY: In the short-term it clearly is not good. The economy grew at a negative rate and if it's in the last quarter, if it does at that two more quarters we're back in recession, but the short-term is nowhere near as important as the long-term with our economy. It's--we are facing a situation with these deficits that in three or four more years, the deficit's going to be down to $600 or 700 billion a year which is an enormous amount of money and then we're going to have another recession and it's going to go up to 1.5 or even more trillion dollars and we're not going to be able to deal with it and if we have inflation which we're going to have at some point we won't be able to pay the debt service. And now it's in the long run we'll be dead with his policies and that's where we are now, we've got to deal with the long run and forget about the short-term.

JOHN TOBACCO: All cuts are good as far as I'm concerned, but a meat ax is a little bit of exaggeration, this is more like a butter knife that these cuts are so small, there's nothing there and what I would like to see is the government take more of a private sector approach, like a businessman and say, let's evaluate what we have 'cause many of these government programs overlap each other and then let's consolidate and instead of having five different programs that do the same damn thing, why don't we put them together and then make some real cuts that make some real sense and then take out the meat ax.

JOHN LAYFIELD: Yeah, absolutely. They're on life support and went from about 40 percent and down in single digits right now and that's why right to work states are getting the new companies, these guys are going the way of the dinosaur and this is a money grab.

JONAS MAX FERRIS: In fact, these are better than the other 50 years of tactics and trying to get better pensions and the companies are going bankrupt and leaving the country. And you're talking about bringing in illegal immigrants and taxing them and good for the work forges, the legal pot thing is great for labor, its jobs that are not in the mafia and its farmers.

GARY B. SMITH: Well, now, I'm going to go back to what John said. They will do things incidentally benefit the economy and labor, but it's really at the behest of, you know, the top executives. And these executives are very well paid and Richard Trumka head of the afl-cio makes times as much as the average worker. They want to consolidate their base and coercing people with the threat of a lawsuit, if they leave the union. So, they want to consolidate their base, grow bigger and the executives make more money.

JOHN TOBACCO: Yeah, I mean, the unions were set up for the safety and security of the worker to get him some safe work conditions to look out for them. And now we have the unions out this doing anything they can to get more members in and I think that Gary was nice and politically correct saying it's a power grab, but come on, this is a money grab. They want more members so they can shake them down for more fees and then the big fat cats on the top will get the big dollar salaries and line their pockets and that's all this is about. I mean, for unions to say they want pot to be legal, that's so they can hire as many illegals as they can to run those pot farms and shake them down.