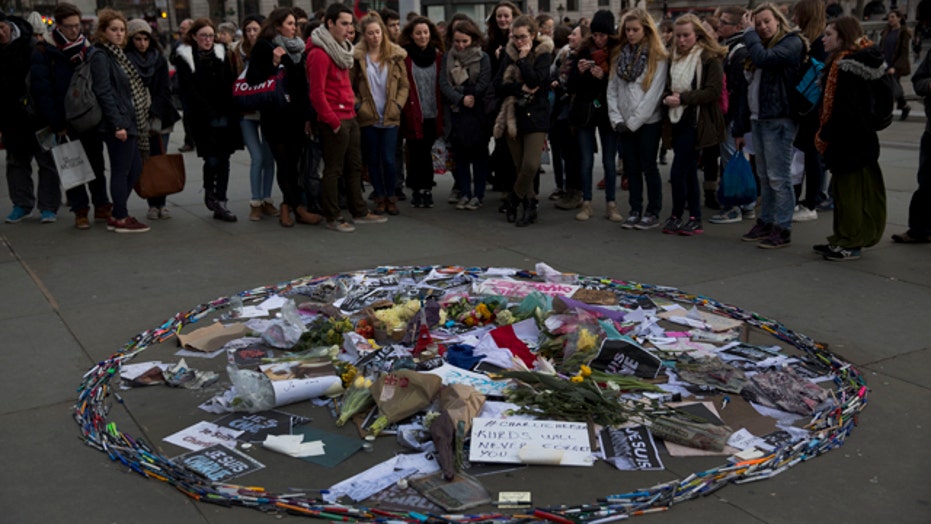 Can we fight radical Islam while being politically correct?

This is a rush transcript from "The Kelly File," January 9, 2015. This copy may not be in its final form and may be updated.

KELLY:  And talk about how it's -- that -- how -- it's inconceivable -- it's an -- inconceivable that the thinking most sacred to us should cause the entire Islamic world to be a source of anxiety, danger, killing and destruction for the rest of the world.  This thinking is antagonizing the entire world.

COULTER:  Right.  And of all the Muslim leaders in the world, this is the one that Obama does not like.

COULTER:  Did attack (ph) him because he took out -- Sisi took out the Muslim brotherhood.

COULTER:  That's when Obama withdrew, you know, millions, maybe it was a billion dollars in aid we were giving Egypt.  So when they are standing up to terrorist fanatics who had been encouraged by the Obama administration, the Muslim brother had.

KELLY:  Isn't this exactly what we need world leaders especially in Muslim nations to be doing?  And that -- I mean, the Western media didn't cover it because it happened on New Year's Day.

KELLY:  . but -- but wouldn't it be helpful if our president, if Hollande, if other Western leaders came out and said, "What that guy said, this is the way."

COULTER:  Yeah.  Yes.  No -- and isn't that I've heard a lot of people say that, you know, usually the Obama administration won't call any Islamic terrorism Islamic, but of course, they had to hear because it was so obvious.  No, that isn't why Obama admitted it was Islamic terrorism.  The socialist president of France admitted it.

COULTER:  The head of the law.

KELLY:  He -- he said it was terrorism.  But he wouldn't say it Islamic terrorism.

COULTER:  He did have that -- that part I love so much where we say it has nothing to do with the religion .
KELLY:  Right.

COULTER:  But I haven't heard that 8 billion times already.  I needed to hear it 8 billion plus one.  So, the head (ph) of information.

KELLY:  But here's the -- let me -- let me just set it up because we could see -- when he remarked on this and President Obama the other day.

KELLY:  . he refused to call it Islamic terrorism, just terrorism he said and then he commented more today and once again and he said nothing about Islamic radicalization, Islamic terrorism, radical Islam, nothing and in fact, as the viewers know back in 2010, his administration banned the term Jihad, banned the term Islamic extremism from the central document outlining our national security strategy.  They want to pretend that does not exist apparently.

COULTER:  Yes, and keep bringing more and more Jihadists in, some of these Somali pirates.  We -- we bring them in to be tried and then either they serve their time and then immediately ask for asylum, or they get acquitted or there's enough evidence and they ask for asylum.

No, let's keep bringing more and more of the third world here.  I think that's a policy we might want to reconsider and France should definitely think about it.  I mean, they're very good at responding to this by running on to the street and holding a candle, but they need to move to the next step.  Why does this happen?  Well, about 10 percent of their population is Muslim.

COULTER:  Maybe -- maybe it would be better if they had immigrants that had a more similar background and who didn't respond to cartoons they don't like by -- by shooting people.  I think that's the next step to consider but we can't consider.

COULTER:  They don't want to live in Muslim countries.

COULTER:  Well, it may be a small minority as the president and -- and the president of France keep reminding us this is not the majority of Muslims, yet and still it's enough of them but maybe you take a little pause in Muslim immigration for.

Right now, is not true as another politically correct conventional wisdom I've been hearing over and over again on TV as well, our Muslims are different.  We get a different brand, and we're so much better at assimilating.  I'm sorry, have you been to the United states of America?
We assimilate no one.

The difference is we have a population that is less than 1 percent Muslim.
It's almost 10 percent in France.  Do not act like Muslims have not been continuing to commit terrorist attacks since 9/11.  I mean, right here in Times Square, the Boston Marathon, the -- the -- the Fort Hood, two attacks there.  There've been about 60 attacks since 9/11.

So, yeah, okay, that's not the majority of them, but it's more than the terrorism we're getting from than say British immigrants.

KELLY:  But what difference would it make if we started calling it what it is?  You know, what I mean, does the label.

KELLY:  . does the label matter?  If President Obama said what Sisi said, what difference would it make?

COULTER:  Well, for one thing he might not have withdrawn American funding from Sisi.  There you have -- you have the good guy coming in taking out the Muslim brotherhood and Obama's nose is out of joint.  No -- can elevate the good ones.  It also might make people reconsider mass immigration from the third world.

KELLY:  I think Charles Krauthammer what he said was so poignant today about we are now entering the third phase of what -- what feels like this is me, not him, world war.  I mean, it feels like a World War.

COULTER:  Great to see you.