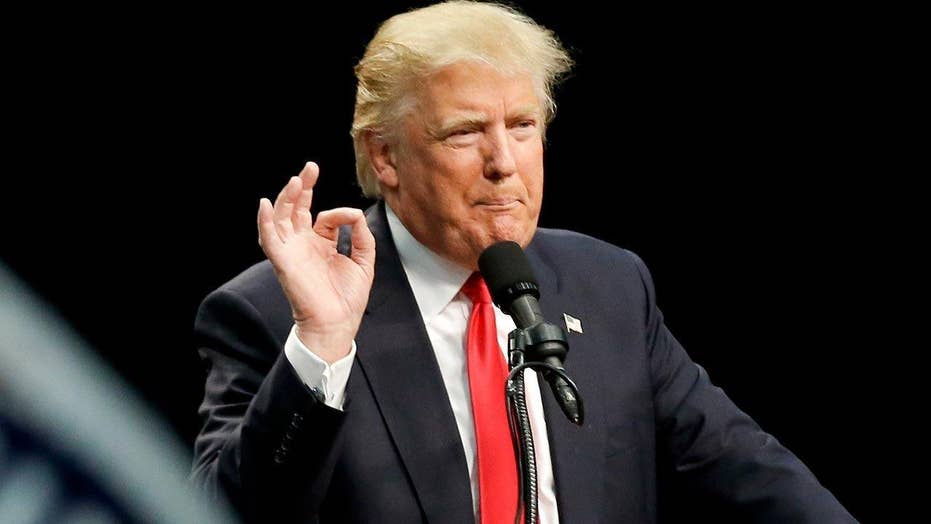 Can Trump win states like CA in general election?

This is a rush transcript from "On the Record," May 27, 2016. This copy may not be in its final form and may be updated.

KIMBERLY GUILFOYLE, 'ON THE RECORD' GUEST HOST: If  [Donald] Trump wants to win California he will have to win big with women, independent voters and Hispanics. So what does he need to do? Let's go to the experts.

Former Arizona governor and Donald Trump supporter, Jan Brewer, goes ON THE RECORD with us tonight. Always a pleasure to have you with us. So what kind of advice can you give to Donald Trump so he can these crucial votes? First of all, he wants California. Tough to do that as you know, it hasn't been done since 1988. How can you make it happen?

JAN BREWER FORMER ARIZONA GOVERNOR: Exactly and I'm a California girl, I was born and raised over in Southern California. It's going to be tough. But I think he has a very, very strong message and that message again is the same all over the country. Donald needs to talk about jobs. They certainly need jobs over in California, and the economy. I think they absolutely need to talk about security and I think that given the fact that he's been so strong on Veteran issues, that when he speaks about the veterans, he's speaking about the whole families.

And that includes all the veteran's spouses and we all know that there's many, many veterans in California and their children. And I think if we get that message out to those people they will really rally around him.

You know, Donald loves his country and he has a great story to tell and given the fact the concerns are the same across the country. The crowds have been huge, so he just has to keep repeating that over and over and over again.

And Kimberly, I think you'll agree with me as a woman, this Clinton Administration, you know, she believes that woman vote belongs to her because she's a woman. Women have more issues than just because just because you're a woman you're going to vote for me. Because I'm a woman, no, you vote for me because I'm the best candidate. And I reject that, I think that if they're smart, they are going to listen and they will make their vote count for the issues that are going to affect them and their families.

GUILFOYLE: Yes they do. You bring up a great point. It's demeaning to women to say that they would just choose someone just simply for the basis of their gender and not of the basis of their ethics. Qualifications, competency to be able to hold the position, I'm quite certain Governor that you didn't want them to vote for you because you were a woman but because of your skill set and you were the best choice for the job.

BREWER: Absolutely. I did not and I would say, some people would say to me, I'm going to vote for you because you're a woman. And I said no, don't vote for me because I'm a woman, vote because I'm the best candidate. I said, I'll do the best job and I meant that sincerely. I think most women feel that way. We don't want anything handed to us because we're a woman. It's because we are the best. We've done the best job. And we know with Hillary that's not true. She hasn't done a good job. She's been vetted for 30 some years and we can go that trail and that's happened. We can see things that we as women would absolutely disagree with.

GUILFOYLE: Al right. Well he's lucky to have you on his side, that's for sure. Powerful voice to get those voters out to support him. Al right, Governor, always a pleasure. Thank you.