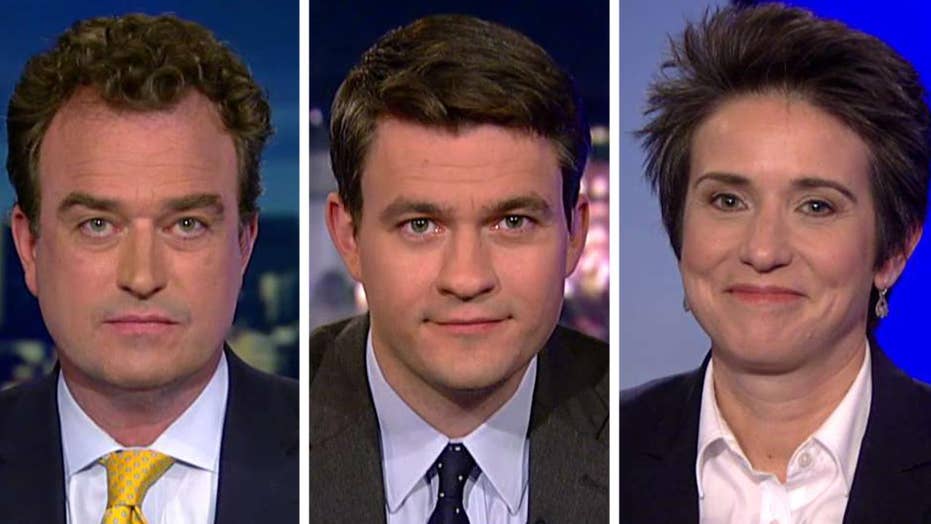 This is a rush transcript from "Special Report with Bret Baier," October 30, 2018. This copy may not be in its final form and may be updated.

PRESIDENT DONALD TRUMP: It was always told to me that you needed a constitutional amendment. Guess what? You can definitely do it with an act of Congress, but now they are saying I could do it just with an executive order. How ridiculous. We are the only country in the world where a person comes in, has a baby, and the baby is essentially a citizen of the United States for 85 years with all of those benefits. It's ridiculous. It's ridiculous. And it has to end.

SPEAKER OF THE HOUSE PAUL RYAN, R-WIS.: Obviously cannot do that. You cannot end birthright citizenship with an executive order. We didn't like it when Obama tried changing immigration laws via executive action, and obviously as conservatives we believe in the Constitution.

BRET BAIER, ANCHOR: The president wants to end birthright citizenship with an executive order. The Constitution, the 14th Amendment actually to the Constitution reads, "All persons born or naturalized in the United States, and subject to the jurisdiction thereof, are citizens of the United States and of the state wherein they reside." According to Pew, children born to illegal immigrants to the U.S., you can look at the numbers here. Back in 2014, the latest they had surveyed 275,000 children born to illegal immigrants in the U.S., thereby becoming U.S. citizens.

What about this. We'll start here with our panel: Charles Hurt, opinion editor for The Washington Times; Amy Walter, national editor for the Cook Political Report, and John McCormack, senior writer at Weekly Standard. John, thoughts?

JOHN MCCORMACK, WEEKLY STANDARD: The reaction you saw from a lot of Senate candidates today was silence. You didn't hear a lot of them wanting to jump out and talk about this because this is a controversial policy.  People not quite sure how it plays out.

As to the substance of it, there's an interesting legal debate about whether or not those words you mentioned, "subject to the jurisdiction thereof," whether those grant birthright citizenship to illegal immigrants or not. Obviously Paul Ryan disagrees with that. Many other countries don't have birthright citizenship, the president is right. Australia ended it back in 1986, but they did so with an interesting twist, which was to say that anyone who was an illegal alien and was born here, that at the age of 10, if they lived here for 10 years they would be a citizenship. So that would avoid this policy problem of having sort of permanent, stateless people. People without a country, an underclass, if you will, if you implement this policy and people born here and they have no country to call their own. So obviously this is a big legal question about whether or not you can do it and a lot of interesting policy.

BAIER: Amy, let's not take the context out. We are seven days away from the midterm election. Obviously Republicans including the president want to talk about immigration. And does this move that ball?

But in the House where the battlegrounds are in these suburban swing districts, where the swing voters are independent women, I don't think this is an issue that is going to get a whole lot of traction or going to be that helpful for Republicans.

I get that the president wants to be able to change the topic, right? He is president of the United States. He wants to move it onto areas where he is more comfortable, where Republicans get more energized. But what I've been hearing from a lot of Republicans in the last couple of days is what they are seeing is something of an erosion now. They're not aren't feeling as confident in some of these House districts.

And to buoy those, here's an interesting point, the president's campaign came out with ads the other day, a national ad that focused on the economy and jobs and had a woman protagonist talking about how important it was not to go backwards on the economy. This is a message on birthright citizenship goes the exact opposite way and is talking not to the voters that those ads wanted to talk to.

BAIER: Yes. And also the president is not in that ad as they were making that final closing pitch. One person, Charlie, who is behind this effort is Senator Lindsey Graham who released a statement saying, "Finally a president willing to take on this absurd policy of birthright citizenship.  This policy is a magnet for illegal immigration, out of the mainstream of the developed world and needs to come to an end. In addition, I plan to introduce legislations along the same lines of the proposed executive order from President Trump." And as John pointed out in his piece, Jeb Bush was for this as well during the campaign.

CHARLES HURT, THE WASHINGTON TIMES: Sure. And I think that Lindsey Graham is exactly right. Kudos to the president for taking on an issue that matters a lot to a lot of voters, both Democrats and Republicans, and an issue that has been completely disregarded by the leaders of both parties. That's a tremendously good thing.

We can have a debate whether or not -- whether it requires a constitutional amendment or alliterative action to change it. What I think is absolutely certain if he were to do it through executive order, you would wind up with court challenges. And when the court took it up, it would matter to the court whether this was an executive order or a legislative fix. And the legislative fix for something like this would be so much stronger in court than an executive order for exactly the reasons that Paul Ryan mentioned, which is the ping-pong back and forth, there will be a future Democrat president and all they have to do is go and switch it back.

So I think that -- I like the idea of punching it to Congress and forcing Democrats and Republicans in Congress to deal with the issue that they have neglected for so long.

BAIER: I wanted you all to weigh in before I ran this soundbite. We've talked about this before, many years before, our late colleague Charles Krauthammer weighed in on birthright citizenship.  Take a listen.

CHARLES KRAUTHAMMER, SYNDICATED COLUMNIST: Talking about changing the birthright citizenship which has been around for 150 years is a sideshow for the real issue. It is a sideshow because it's a symptom. If you control the border, those numbers will dwindle. And second, the issue is not the baby itself. It's the laws, the statutes, which are changeable, they're not constitutional, that change one baby into an imported village because of the preferences that we give to families. That ought to be the issue. That ought to be what we are discussing. And that's what you can change.

So even assuming the repeal of the 14th Amendment is a winning issue, are these issues that Republicans want to actually advance?

BAIER: We miss him every day, especially during these tough times that the country is dealing with. Wanted to hear him tonight on that.

I want to turn to the election. Lets' take a look at our power rankings as FOX News has it. First the Senate. We have the split 45 Democrats, 50 Republicans. This includes likely and leans. We have five tossup races.  It looks like at this moment that if this all holds that Republicans pick up two, maybe even three seats in the Senate.

On the House side, different story, 191 to 171, 31 tossups in the House.  We have it, obviously, 218 is the magic number for control of the House of Representatives. We asked you all to pick a race. Amy, let me start with you. You picked a House race.

WALTER: I did. I picked a House race. This is in northern Maine. This is Maine's second Congressional district. What I like about this is, one, it's on the east coast so we'll know early on where this thing is going.  But it's also one of 12 districts that went for Obama in 2012 but went for Trump in 2016. These are the kind of districts I'm going to be spending a whole lot of time watching on election night. We know that the districts that went for Hillary Clinton in 2016, especially the suburban districts, continue to break for Democrats right now. But if Democrats are going to have a really good night on election night or if Republicans are going to have a better night, Republicans need to hold onto these Obama/Trump districts in these more rural, and a lot of these are in upstate New York and rural areas around the country.

BAIER: All right, guys, I've got to roll. Lightning round here. You've got two Senate races. First Charlie, then John.

HURT: Yes, so Bob Menendez running in New Jersey, a state that Donald Trump lost by 14 points because of this corruption trial. He's in deep water and Democrats are having to spend millions of dollars there that they'd like to spend elsewhere. And it'll be interesting to see whether the dissatisfaction with Trump is enough to get him back into the Senate.

MCCORMACK: Nevada Senate, it's one of the five races where the margin is within two points, the only state with a Republican senator up that Hillary Clinton won in 2016. Democrats still have an outside shot of taking over the Senate, but if they are going to do it, they're going to have to win Nevada. Dean Heller up by 1.7 points in the Real Clear Politics average, not a comfortable place for him to be. The union machine in Nevada does a great job of getting out the vote, and you've had a lot of Democrats over-perform in Nevada in recent years.

BAIER: All right, panel, thank you very much. Seven days to go.