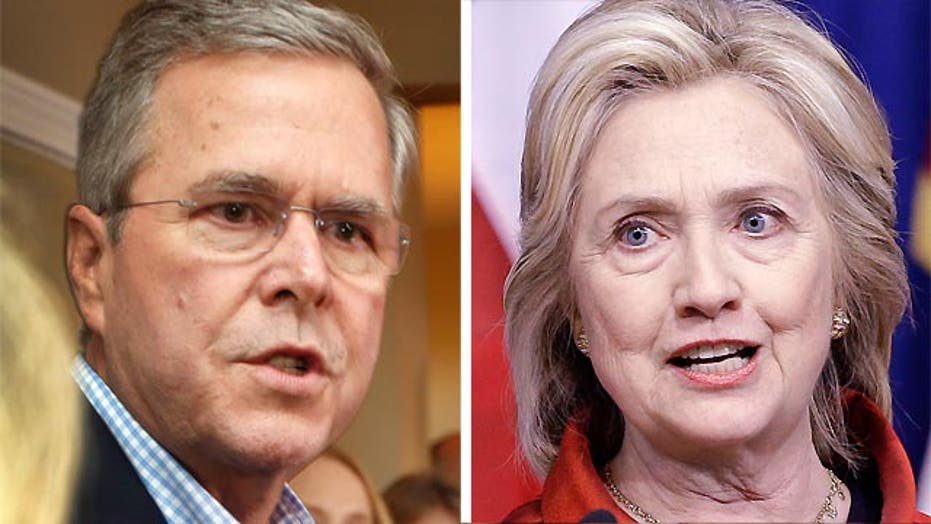 Bush vs. Clinton: Who's in touch with American workers?

This is a rush transcript from "Special Report with Bret Baier," July 9, 2015. This copy may not be in its final form and may be updated.

FORMER GOV. JEB BUSH, REPUBLICAN PRESIDENTIAL CANDIDATE: My aspiration for the country, and I believe we can achieve it, is four percent growth as far as the eye can see, which means we have to be a lot more productive. Workforce participation has to rise from all time modern lows. It means that people need to work longer hours, and through their productivity gain more income for their families.

BRET BAIER, ANCHOR: Well, on a day when the Bush super PAC announced more than $103 million, the Bush campaign and Jeb Bush had to deal with that about working more hours. Hillary Clinton tweeting out soon after that came out "Anyone who believes Americans aren't working hard enough hasn't met enough American workers." Jeb Bush responding, "Anyone who discounts 6.5 million people stuck in part-time work and seeking full-time jobs hasn't listened to working Americans @HillaryClinton."

Jeb Bush then offered this full-throated kind of clarification to The Washington Post: "If we're going to grow the economy, people need to stop being part-time workers. They need to be having access to greater opportunities to work. You can take it out of context all you want, but high sustained growth means that people work 40 hours rather than 30 hours." Let's start there. We're back with the panel. Jason?

JASON RILEY, WALL STREET JOURNAL: Yes, obviously, I know this will be a shock to viewers, Bush's comments were taken out of context by the Clinton campaign. Obviously to achieve the four percent growth that he would like to see and thinks we are capable of more people need to be working full- time. Bernie Sanders has said the same thing, that there are millions and millions of part-time workers who want to be full-time workers. The only reason we have 5.4 percent unemployment rate is not because there are so many jobs out there but because some people have stopped looking for work.

BAIER: Senator Ted Cruz has said he doesn't want to attack other Republicans, but he didn't pass up on this one. A statement today, "It would seem to me that Governor Bush would want to avoid the kind of comments to let voters to believe that Governor Romney was out of touch with the economic struggles many people are facing. The problem is that Americans aren't working hard enough. It's that the Washington cartel of career politicians, special interests, and lobbyists, have rigged the game against them." Again, Washington cartel including Republicans.

JULIE PACE, ASSOCIATED PRESS: Yes, I'm not sure this is going to stick on Jeb Bush the way that Romney's 47 percent comment stuck with him through the general election. I mean, it was clear he was not as precise in his language as he probably wishes he would and we saw in his clarification that he tried to make clear what he was trying to say.

To Ted Cruz's point, though, we know that one of the Democratic strategies is going to be to try to make Jeb Bush look like Mitt Romney. They feel like he has things in his background, his personal wealth, his family wealth, that they can use. Jeb Bush, though, is a much different candidate than Mitt Romney, a much better candidate, we are already seeing. That is not going to keep Democrats and some Republicans from trying to make that line of attack. But I don't think this is one of those situations where that's going to be successful.

GEORGE WILL, SYNDICATED COLUMNIST: It's a bit thick being lectured on the life of the ordinary worker by Hillary Clinton, who has not had a job in the private sector since she was a rainmaker for the Rose law firm, the less said about which perhaps the better.

But I summon in Jeb Bush's defense as a witness my man Bernie Sanders, who is going around saying, more or less correctly, that the real unemployment rate, if you count people who are unemployed and those too discouraged to keep looking for a job and those who are working fewer hours than they want to work, the unemployment rate is 10.5 percent. Now, he is a socialist. He is good at arithmetic, but he is probably close enough in that case. The fact is the workforce participation rate, if it were today what it was when Barack Obama was inaugurated the unemployment rate surely would be over nine percent.

PACE: I think this is one of the things that can drive Americans crazy about politics, because this is a real problem in the economy that you have people who want to work and either aren't able to work jobs where they can make enough money, work enough hours to support a family, or don't find jobs available. Let's have a debate over what these candidates are going to do about that.

BAIER: Who knew that George would be feeling the burn at the panel here.

I want to play this one sound bite from the interview I had with Jeb Bush the other day in New Hampshire. Full piece runs Tuesday, but asking about vulnerabilities for Hillary Clinton.

BUSH: It's her, just this protective shield she wants to create around her candidacy. I just don't think it's going to work, and the fact that she can't be trusted. There is never a straight answer, whether it's the server, the emails, Benghazi, just constantly, you know, validates this notion that there are two sets of rules.

BAIER: So when somebody says, you know, if it's Clinton versus Bush, it's going to drive down participation, people are not going to be motivated to head to the polls, what do you say to them?

BUSH: I'm going to win the nomination and I'm going to run a campaign that will inspire people that their lives can get better. And that will drive turnout particularly among people who conservative and they just don't know it yet.

BAIER: They just don't know it yet. A little tease for Tuesday, the "Contenders" piece.