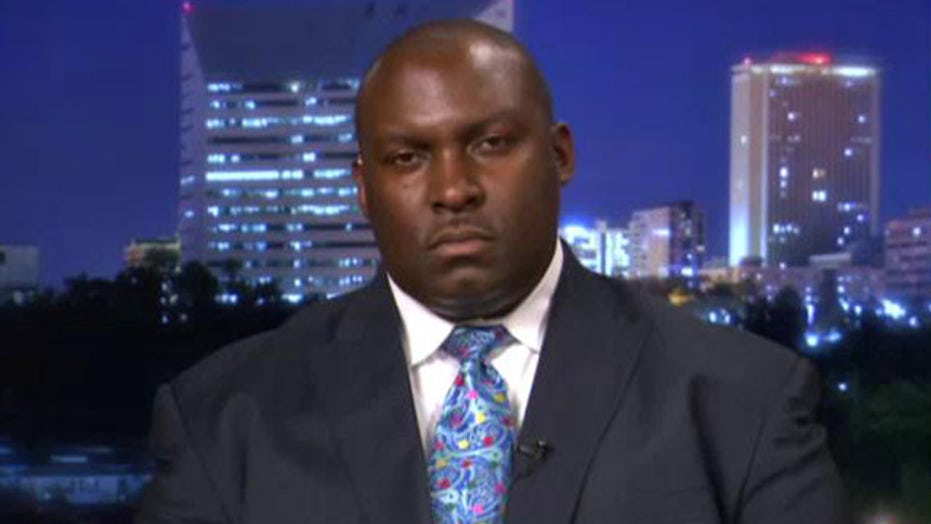 Daryl Parks challenges process, decisions that were made

This is a rush transcript from "Hannity," November 24, 2014. This copy may not be in its final form and may be updated.

SEAN HANNITY, HOST: As we have been reporting, the Ferguson grand jury has decided not to indict police officer Darren Wilson in the shooting death of Michael Brown.

Joining us now from St. Louis, Missouri, with much more reaction to the grand jury decision is the Brown family attorney, Daryl Parks.

Daryl, we've been through this story. And I kept saying from the very beginning two very diametrically opposed stories. You heard Robert McCullough earlier tonight. He laid out the second version of stories and said that a lot of black witnesses testified here.

How do you react to that?

DARYL PARKS, BROWN FAMILY ATTORNEY: Well, Sean, let me say first of all the Brown family is extremely disappointed in the outcome today from the grand jury. It's always a travesty when our judicial system fails to respond to a very horrific situation like what we saw here today.

That said, we do not believe there should be any violence whatsoever. And certainly we don't want anyone else to be harmed.

But when the system doesn't respond and doesn't give justice in a very tragic situation, then we have a real problem here. And so I've not heard everything that Mr. McCullough said and sat here very attentively to what he's had to say; however there are many issues with the process and a lot of questions that will have to be answered in the coming days about decisions that were made that got to the outcome that we have here.

HANNITY: -- he went through enormous amount of detail. And as you can see there on the screen, we have reports of now rocks being thrown, bottles being thrown. We had Mike Tobin reporting earlier that the sounds of pop, pop, pop was heard throughout the crowd. You see fires, you see a lot of tear gas canisters that have been released as well.

You heard him say earlier here that the evidence, that all of these witnesses that didn't go to the media came out and they explained their story that, in fact, there was a struggle within the car, that Michael Brown was struggling.

By any definition that would be justifiable use of force to protect one's self. You have to take into account the grand jury; do you suspect that they were not being diligent?

PARKS: Let me say this, Sean, tonight more importantly than anything is not a time to go through the evidence of detail. Tonight is a night to call for calm, for everyone to resist the anger that many of us feel.

And so we want to just make sure that everyone stays calm right now and start to just reflect briefly. And as you know, Michael Brown's dad --

HANNITY: All right. Hang on for one second if I can, Daryl. We have reports of shots fired.

And standing on the ground in Ferguson tonight is our very own David Webb, David right in the middle of this -- David.

DAVID WEBB, FOX NEWS CORRESPONDENT: Hey, Sean. How are you? And I got to tell you it's pretty lively right now. Bottles are being thrown at the police. We've had a few come over and we're close to them; tear gas canisters being launched down South Florissant.

People are running, some have tears in their eyes. A lot of them have just been rubbing their eyes. And I got to tell you, Sean, this is a fast-changing situation. That call for peace may not have gone through.

HANNITY: Yes, well, I appreciate it. Let us know. Keep us up to speed. We have a lot of other reporters we want to get to. I want to give Daryl Parks one other point here.

People from the very beginning, Daryl, were prepared to act regardless of what the evidence showed here because nobody knew all the evidence that the grand jury was going to hear.

Isn't that a problem?

The president didn't address that part of the issue tonight.

Don't we need to wait -- aren't all people supposed to be presumed innocent until they're proven guilty?

PARKS: Well, here's the problem though, Sean. And I think that everyone did just what you're saying, giving the officer the benefit of the doubt and giving him fair justice.

PARKS: Well, but the eyewitnesses also gave a different account. And there will be a time to weigh all of the witnesses who said whatever they said. I think tonight is the night we just need to be calm. The grand jury's made its decision --

HANNITY: Well, it's not calm out there right now.

HANNITY: All right, Daryl, appreciate it. My thoughts and prayers to the Brown family. It is a tragedy by any definition.