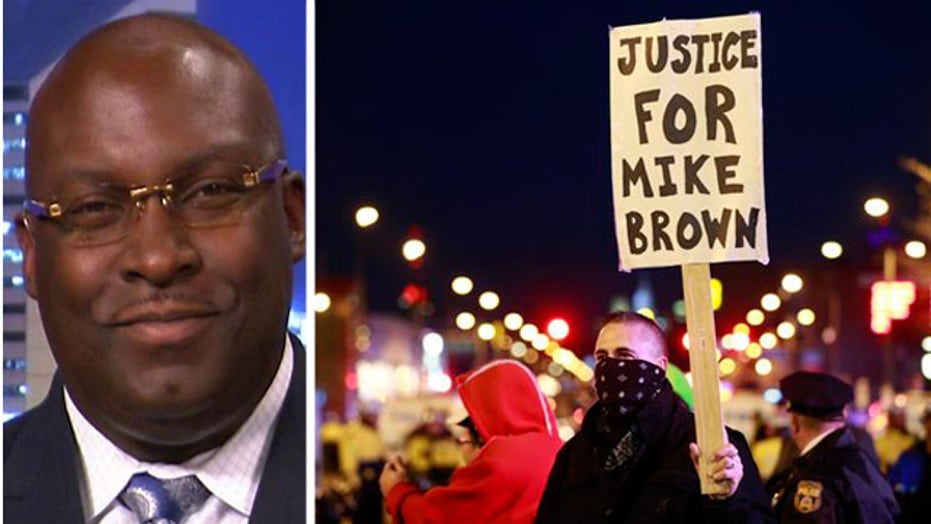 Daryl Parks reacts to no indictment in Michael Brown shooting

This is a rush transcript from "Hannity," November 25, 2014. This copy may not be in its final form and may be updated.

SEAN HANNITY, HOST: Here with reaction to this interview and much more is Brown family attorney Daryl Parks. Daryl, good to see you again. Thank you for being with us.

HANNITY: I know you're unhappy with the decision. I spent a larger part of today reading through all of the evidence that was presented to the grand jury. And we -- we -- let's start with the video of the robbery -- then we have the police officer saying -- you know, he asked both him and Dorian Johnson to get off the middle of the road and the answer was, “F what you say.”

Then he struggles for the gun, closes the police car door on Officer Wilson. You have numerous eyewitnesses, black eyewitnesses, that corroborate the officer of the story, tells him many times to stop, and then, quote, "He looked like a football player with his head down" charging at Officer Wilson.

HANNITY: Hold on what?

HANNITY: No, but the eyewitness...

HANNITY: But the black eyewitness has corroborated the police officer's story. And they said he robbed the store, said "F" the police officers, you're too much of a P-word to shoot me, tried to steal his gun, charged at him, quote, and I'm reading, "like a football player with his head down charging." Who acts like that towards a police officer?

PARKS: Wait a minute. First of all, I think that...

PARKS: ... the prosecutor, along with what you're doing right now, are taking the witness statements totally out of context. And so in this situation...

HANNITY: No, I've read -- I've given you verbatim and context and texture!

PARKS: That's not what Dorian Johnson says. He's one of the main witnesses.

HANNITY: Dorian Johnson said that he had his hands up and shot him at point-blank range! He just robbed a store with this guy!

PARKS: He didn't say at point-blank range, but he was the closest witness, and he did not corroborate what Officer Wilson said.

HANNITY: Everybody in the studio is laughing, Daryl, because that's so absurd that he's not -- all right, let me ask you this. I want to go back to this. The question here legally is whether or not this is justifiable use of force.

When you read those comments about Michael, why aren't you outraged at his behavior?

PARKS: Well, first of all, if you -- you can't look at this whole situation that globally. You have to stop and take it piece by piece. One, you have what happened at the car. Two...

HANNITY: First thing he said to the officer is, “F what you say.” Number two, we -- let's go back to the beginning. How many people...

PARKS: Well, back up! Back up, though!

PARKS: ... have you seen treat a store clerk the way Michael Brown treated that store clerk?

PARKS: But you said it as almost as if he cold-cocked him. He didn't cold-cock that store clerk.

PARKS: But he did not strike with a fist that store clerk.

HANNITY: ... but we saw it on video. He looked very intimidating. Next thing...

PARKS: He didn't give him a beat down.

HANNITY: So the cop says, you know, F -- the cop says, Get out of the middle of the street. He says, “F what you say.” And then he slams the door shut, and then struggles for a police officer's gun. Let's focus on that.

PARKS: Well, you know what? It would be nice if that's all that happened, but we also now know that there are comments from the officer that talked -- that cast that particular community in a negative light.

HANNITY: What -- what words did the officer use that cast the community in a bad light that has to do with the struggle for the gun?

PARKS: No, he -- before he -- he makes a statement that this is not one of the well-liked communities. And then I think that the problem with the whole grand jury situation, Sean, is that it was done in private, done in secrecy...

HANNITY: You're not answering my question.

HANNITY: Now, that would tell me that if he got that gun, he'd kill that officer! Doesn't that put that officer's life in danger?

PARKS: Yes, but also, once Michael Brown abandons that situation...

PARKS: ... and he runs from the car, that changes the situation completely.

PARKS: You left one thing out, though. As he gets out of the car, he continues to fire at Michael Brown.

PARKS: But Sean, before Michael Brown turned around, though, the officer had already commenced shooting at him. And so let's not leave out that very crucial fact. That's why it became very important that this officer should have been indicted...

HANNITY: No, I don't remember reading that part.

PARKS: Well, it's there.

HANNITY: So my question is to you, when you look at it in total, if somebody struggles for a cop's gun after a robbery and then charges the police officer like a football player with his head down, and you're saying -- you act as though that you're surprised that the officer had to defend himself. I'm not surprised. And I'm not surprised at the decision of the grand jury, either!

PARKS: Well, let me say also, too, one of the things the officer said -- the officer said that before Michael was upon (ph) him, that he realized that some of the shots had hit Michael. So he knew that Michael had already been wounded.

HANNITY: Right, and then he stopped shooting and then Michael kept charging!

PARKS: Well, here's what I'll say to you. All I know, that the fatal bullet that Michael Brown received was at the apex of his head, and went from the top front. So certainly, the officer was over him when that shot was fired, and he didn't have to shoot him like he did.

PARKS: And that's where we are.

HANNITY: ... there were no entrance wounds in the back. So that story's been debunked by the forensics in the case, and similarly by the autopsy in the case. And I go back -- I'm going to ask you one more time. When you look at the behavior of Michael Brown -- you represent his family and I -- my thoughts go out to his family. It's a tragedy any time a young man dies. But we have to send the message that you're not allowed to rob stores, curse at police officers, fight for their guns, charge them like a football player. Isn't there a big lesson to be learned there about his behavior, too?

PARKS: Let me say something. Obviously...

HANNITY: You're not answering, Daryl!

HANNITY: Come on! Answer that!

PARKS: No, let me answer! You're not -- let me give you the complete answer. You're interrupting me. Certainly, no one should behave in that manner, OK? We agree on that fact. However, we don't believe that the circumstances that were met here required this officer to take Michael Brown's life. It did not require that.

HANNITY: All right, last question. The attorney general says he's moving forward with civil rights violations. To do that, the officer would have legally have to intentionally tried to violate his civil rights. Number two, there would have to be some type of racial component to this case that can be proven.

Can you give me one example of anything racial or any incident that proves that he intentionally tried to violate his civil rights?

PARKS: Well, I think that once the feds do their investigation, they'll look at some of the words and adjectives that are used by the officer...

HANNITY: As of tonight, you cannot...

PARKS: Well, you know what? I don't think you have to use the actual words for it to be racial. So we'll see.

PARKS: Well, what it does is that it casts Michael Brown in a negative light, and certainly, whoever sits and judges this case will have to make that determination. I won't judge that for them. But there's

certainly certain words that can be judged that can cast within the light...

PARKS: ... for a civil rights violation.

HANNITY: What does it mean to you that you had so many eyewitnesses from Ferguson that were black that all corroborated the story that the officer gave? Does that not impress you? I think it took great courage, commitment to truth and honesty that so many came forward and told the truth! Does that not tell you that justice was really served here?

PARKS: No. Here's what it says. It certainly says -- I agree to some degree that justice was served in this regard. There were several witnesses. Some witnesses may have seen it the way that the officer seen

it, some witnesses saw something different. But in this case here, that was enough to indict.

What we don't see here is a public trial where all the evidence is put on, where this officer has to face cross-examination, where he -- where the prosecution puts forth its case, the defendant puts forth his case. What we have is this officer telling his own version, an interpretation in a very flawed process. So that's why we've get the result that we've gotten.

HANNITY: The prosecutor didn't even have to bring this to a grand jury. He could have made that decision independently -- 70 hours of testimony, 25 days, 60 witnesses they heard from. Many corroborated the police officer's story, and it seems to me that this was a slam dunk. All they needed in this particular case -- they didn't need beyond a reasonable doubt. They only needed probable cause. It couldn't even meet that standard to a grand jury!

This never would have been proven in a court of law! You know that as an attorney, don't you, that if...

HANNITY: ... you have six black eyewitnesses corroborating the cop's story, you never were getting any -- any guilty conviction!

PARKS: But Sean, listen here. Here's the problem. He could have proven preponderance of the evidence with five witnesses. They chose to put on another additional other 50 witnesses who probably had nothing to add to the case. Certainly, this poor grand jury is sitting there seeing this great mother lode of witnesses whose testimony was totally irrelevant, did what they did.

PARKS: It wasn't their fault. The prosecution could have put on a basic case and gotten an indictment.

PARKS: That did not happen.

HANNITY: I don't think the -- I think they put on the whole case, and it was incontrovertible and overwhelming.

HANNITY: Anyway, I got to go. But as always, Daryl, thank you. We appreciate you being here.