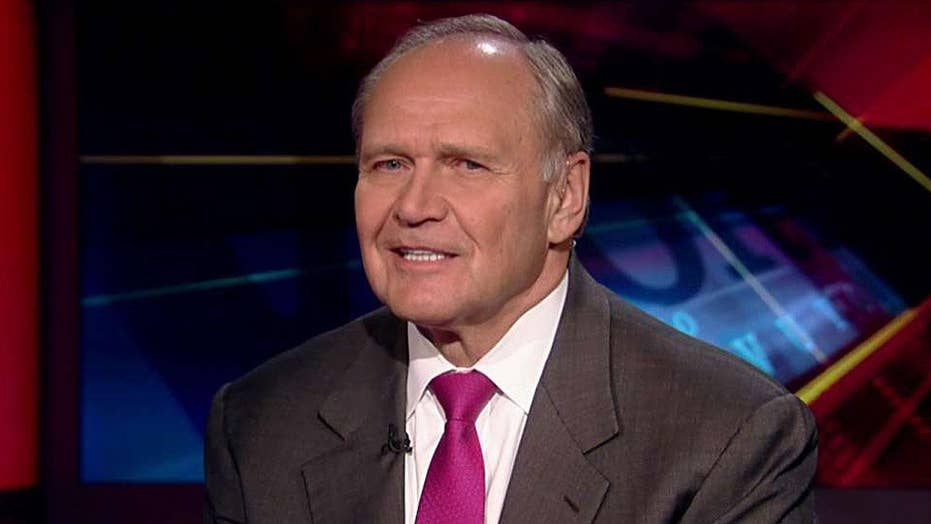 Former Chrysler CEO weighs in on 'Your World'

This is a rush transcript from "Your World," April 24, 2017. This copy may not be in its final form and may be updated.

NEIL CAVUTO, HOST: All right, I have Bob Nardelli here, his read on all of this. Of course, he's the former Chrysler, former Home Depot CEO, XLR-8 founder, and so much more, of course, a big wig at G.E. as well. We forget all of that. So, to have his resume.

Good to see you, my friend.

NARDELLI: Yes, I tend to agree with you.

Now, you know, the media today is all about France. I would see France, talking to some of my colleagues, it's the lack of disruption, as opposed to -- as Nigel said, it's not so much the upside. It's just the globality of companies not having to deal separately with new trade agreements, et cetera.

CAVUTO: Does that help you? In you're running these multinationals, it's a little easier to deal with a union than it is like 20 different countries. Right?

NARDELLI: Sometimes it is, and sometimes you're disadvantaged.

But I think it's just the lack of disruption and uncertainty. I think the centrist thing is probably positive relative to what we might see extreme over there. But I kind of think, again, talking to the fellow CEOs, it's the 15 percent corporate tax.

NARDELLI: That is huge.

And there's been a quiet period where people -- the CEOs were getting a little concerned that maybe that had fallen off because of the health care thing. But if that is back on the table, that's big.

Number two, we have not heard about repatriation of offshore funds, a couple of trillion. That could be another big boost.

CAVUTO: We should explain. When you talk about repatriation, a low enough tax rate to bring that money back, the president has talked about ways to utilize that maybe for infrastructure and the like. How doable is that?

NARDELLI: I think it's very doable.

NARDELLI: I think, if you say, look, we're going to put 25 percent of the repatriated funds into infrastructure backed by a corporate -- by a government bond, that's good.

NARDELLI: Twenty-five percent goes into clearly identified job creation. Grow the economy, right, GDP, jobs, better economy. And then the other 50, you got to make sure it's not used to buy stock back, because the general population...

CAVUTO: That's what happened the last go-around with President Bush. Remember that?

NARDELLI: It did. It did, Neil.

We have got to make sure that the population doesn't see that the stock buy-back...

CAVUTO: Do you hang that out to these companies?

NARDELLI: For the fat cats, right, because of the options. You have to make sure.

Now, the other thing on the tax I want to make sure is that we take care of the individual business. I deal a lot with family offices and privately held. And they're doing their taxes on a personal income basis.

CAVUTO: So if you were to do only corporate taxes, they would be left out of the party.

NARDELLI: And that's a mistake, because we know they represent a big part of the overall revenue and income and job creation in this country.

We have got to be able to address all three of those, I think, going forward in a very positive way, Neil.

CAVUTO: Do you think, Bob, that you have to pay for tax cuts? I guess that is going to be the raging debate here in the next few days, even among Republicans, that do you pay for those cuts?

Do they have to be revenue-neutral right off the bat? Now, Art Laffer, who will be joining me soon, he says technically no. They will create a lot of revenue, dynamic accounting. I understand that. But in the near term, can you, as a pretty prudent financier and a conservative when it comes to fiscal policy matters, could you live with deficits getting worse before they get better?

NARDELLI: Yes, if we weren't $20 trillion in the ditch.

So, we put ourselves in the trough here. But I would still be very positive and very favorable towards a 15 percent corporate tax, something for the individual small company. And then let's address repatriation. That's $2 trillion that could come back to create stimulation and jobs and economic growth.

CAVUTO: Should the upper income have a tax cut?

NARDELLI: No, that's not me.

NARDELLI: My French isn't as good as yours.

Let me just make one other comment. There's been a lot of discussion about Trump and the first 100 days. Let me take kind of a CEO approach. If you look at his term and you take the first 100 days, Neil, that's .068 percent of the time in the job.

I mean, if we went to the Patriots' Super Bowl game, how would we have voted on them the first four minutes of a 60-minute game?

CAVUTO: No, you're right.

Do you know when had the worst 100 days of all our presidents?

I think he has a very fast start. The problem is, his team is letting him down. Right? They have got to catch up to him. He can't let them pull him back.

Again, I'm not comparing Donald Trump to Abraham Lincoln. All I'm saying is here, folks -- hi, how you doing? -- is that we have had some really great presidents who had a lousy first 100 days. Jimmy Carter had a good first 100 days.

And we have others like Ronald Reagan who also had a lousy first 100 days, and those who started off very briskly, and it was anything but. George Bush Sr. comes to mind. So, just keep that in mind. The 100-days thing is a very good barometer. We use it and it's been the case since FDR. But it's not always accurate, right?

NARDELLI: I wouldn't put an A, B, or C. I would say outperformed certainly the last administration.

CAVUTO: There you go. Don't get me started on Millard Fillmore. Whoa.

CAVUTO: All right, thank you very much. Good seeing you, my friend.