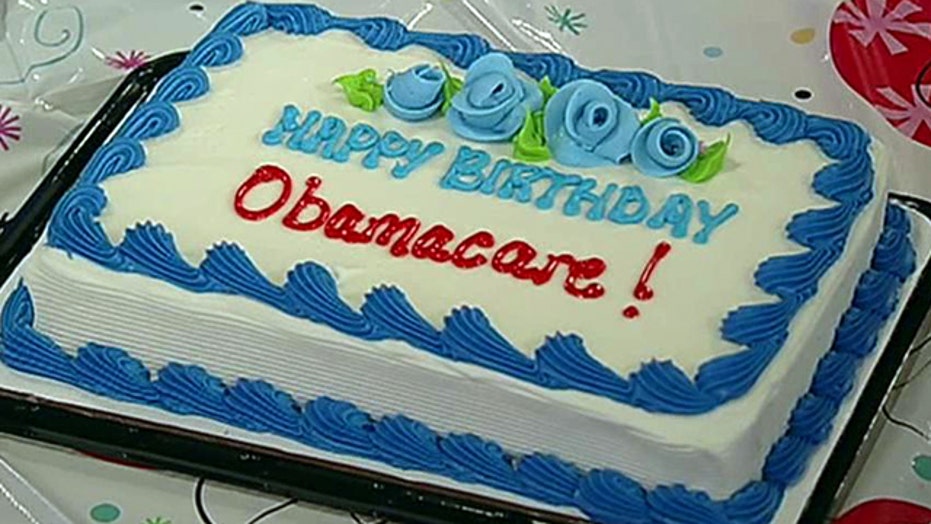 Gift that keeps on taking?

HEALTH CARE LAW TURNING 3 YEARS OLD SATURDAY: SHOULD WE "HAVE A BASH" OR "SHOULD WE DASH?"

KIMBERLY GUILFOYLE: You are going to see a lot more of that. This is one example of the direct impact this is having on small businesses and real Americans in their everyday lives. At first we had the legislation, people were trying to read it, get through it. Now you see the regulations piling up and the practical day-to-day impact. Coming out right now in the form of a woman trying to make a cake and run a living and a business for herself.

WAYNE ROGERS: It's too bad the congress didn't learn about it. It's only 2,200 pages long. None of them read it. They voted on it. We elected people who are idiots, who vote on things they do not read. There is a payroll tax of .9 percent, an investment tax of 3.8 percent, an excise tax of 2.3 percent, of which there are 159 rules to spell out how that tax applies. Can you imagine how this is going to be? This is a nightmare. This is invented so the federal government can hire millions of people to make this legislation possible. It's idiotic. They should break it and start all over.

SALLY KOHN: Look, it's going to bring down health care costs. It's amazing people hate so much something that has barely taken effect. Most hasn't gone into effect yet. Let's just note- the American people when asked about the specific provisions in the affordable care act, actually like it. They like tax credits for small businesses to pay for insurance, they like closing the Medicare donut hole, they like kids being able to stay on their parents' insurance. 80 percent Of people like those things, and less than 50 percent actually know they are in the bill. So stop smearing the bill, tell people what's really in it and let them decide.

TRACY BYRNES: Let's talk about why this stuff didn't kick in. We had to wait until it got voted back in. They purposefully wrote this thing so that once he's in all the crappy stuff comes out. We're two years in, nobody has a clue what a "state exchange" is. Nobody knows what is going to happen to Medicare costs, Medicare anything like that. Good luck trying to find a doctor or nurse in the next couple of years. And they did this on purpose, Eric. They waited until the guy got back into office, and then "bam", they smack you with all the nonsense.

JONATHAN HOENIG: Are they going to be okay when their premiums rise 100 percent? That's what's being estimated for folks in their 20s and 30s, as soon as 2014. This is a birthday party, take this birthday present and bring it back to sender. Like Medicare, like Social Security, like all of these government entitlements-- of course costs will rise. You'll see premiums go up; you'll see cuts to hospitals; you'll see more and more doctors leaving the practice, and it's no surprise why. A free market is what lowers costs. This puts government even more in charge of health care and it's, to Wayne's point, going to ruin it for us all.

DRIVE UP GAS TAXES TO PAY FOR FIXING OUR INFRASTRUCTURE?

JONATHAN HOENIG: Well, Eric, gas is already taxed a lot. 49 cents on average per gallon of gas. We're already paying in taxes. Don't blame the quote-unquote "evil oil companies," blame taxes-- one of the biggest factors when it comes to actually powering out lives; putting energy in our car. Instead of more taxes and more taxes, why not try a tiny bit of freedom, and start privatizing some of these roads. It's done all over Europe. That way the costs are borne by the people who actually use the facility, not sent to Washington so they can hand out to their constituents.

WAYNE ROGERS: I think it's a great idea. I'm not against this tax. I think a 1-cent tax that actually goes into a highway trust fund-- the key word there is "trust"-- so it won't get you know, watered out somewhere, that's probably good.

TRACY BYRNES: You pay like 50 cents on the gallon in New York. If anyone has driven down 48th street recently, you feel like your intestines are going to come out of your throat. It's so bad and bumpy. I don't know what they are doing. If you could use this money and fix the road, I would give you 5 cents extra. I would keep giving you money, but we can't trust them to spend it properly.

KIMBERLY GUILFOYLE: That's the point. I don't really feel like helping reward them by giving them more money that they are not going to spend properly. Like we did with the hard working American taxpayers, giving a trillion dollars for stimulus, et cetera. Where are the shovel ready projects? Three years later Obama is like "Whoops, I guess they weren't so shovel ready, my bad." Why are we going to do this? Do more with what you have already. That's the point.

SALLY KOHN: I don't have time to address all that. Let me say two things: one, we got roads that are broken and need to be fixed. Two, if you privatize those roads, that's a tax on people, too, because people who rely on the roads to get to work, especially middle class and low income folks-they're going to have to pay, and they may not be able to afford it.This is a way we share those costs. And yes, it does create jobs. You get double bang for the buck. Construction jobs are real jobs.

CASH, CORRUPTION AND "CUSHY CONSEQUENCES": GOVERNMENT OFFICIALS FOUND GULITY, BUT WAS PUNISHMENT HARSH ENOUGH TO SAVE TAXPAYERS IN THE FUTURE?

KIMBERLY GUILFOYLE: I don't think it will. I think this will essentially amount to a slap on the wrist. I'm not sure that it's going to deter any of these public officials from ripping off the taxpayers because the temptation is too great. I think the American taxpayer is still going to be vulnerable to this level of corruption. Keep in mind the big kahuna in it-he still hasn't been tried.

SALLY KOHN: Whoa, and it's all these guys' faults. Here's a bigger issue-- I'm glad these guys were prosecuted-you've got HSBC that's been laundering money for drug cartels and profiting, you've got JP Morgan that foreclosed on military families. Why don't we prosecute them? It may be just a slap on the wrist, but it's a good start.

JONATHAN HOENIG: What's needed is not harder convictions, in my opinion, Eric; it's smaller government. Big government is what invites the corruption, because instead of just protecting people's rights they are involved in recycling and lending money as they were Bell, California, and education and health care. That's what creates the corruption. So shrink government- shrink its size and scope-- and you'll shrink corruption as well.

WAYNE ROGERS: Because I don't believe that. If you start locking these guys up and putting them away for good-- yes, that will stop it. You got five cities in California right now that are in bankruptcy. You know what that's going to do to the municipal bond market in this country? All of this money is going to dry up because you have thieves running it, and you can stop it if you put them away. You put them away for good. You electrocute a couple of those guys, and believe me that will stop it.

TRACY BYRNES: I'm with Wayne. Look, it's going to make somebody think twice now. For the longest time they've been getting away with this. It's been easy-- paying bills, going on vacation and no one notices. Now shows like this bring it to the forefront. You know what? Maybe we're making a difference.

WAYNE ROGERS: I have talked about AAON in the past. One of my long term holdings. Always solid in a recovering economy. Great management.

JONATHAN HOENIG: Banks in Cyprus are collapsing, but those in Japan continue to rally. I'm sticking with Nomura (NMR), a Japanese financial firm I talked about a few months ago and has risen, despite the fact it gets almost no major participation or interest from US investors. We're at an all-time-high in the Dow, but consider that Japan's Nikkei, now near 12,500, must rise to 39,000 to hit a new all-time-high. If it does, stocks like NMR will lead the way. (Yes, I own).