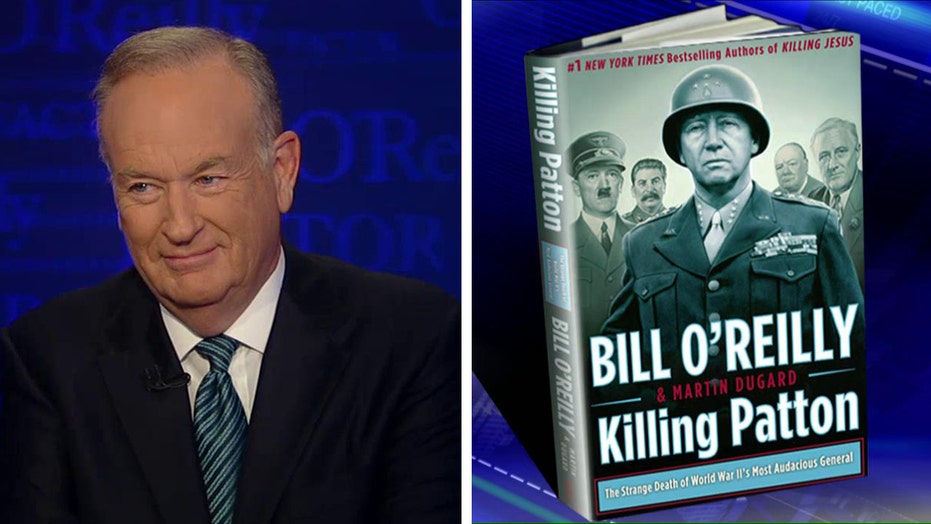 This is a rush transcript from "The Kelly File," September 23, 2014. This copy may not be in its final form and may be updated.

MEGYN KELLY, HOST: Well, Bill O'Reilly's new book "Killing Patton" is already number one on Amazon. It is about General Patton and World War II, and it may have some insight on the new fight America is facing. I spoke to Bill earlier tonight.

KELLY: All right. So, General Patton -- your next target in your latest book. I open with this, this is a quote with which you open the book from him. We'll win this war but we'll win only by fighting and showing the Germans that we've got more guts than they have, or ever will have. We're not just going to shoot the sons of bitches, we're going to rip out their living G-damn guts and use them to grease the treads of our tanks, June 5th, 1944. Could that kind of a general work today in our military for this president, would he be allowed to?

O'REILLY: We certainly need that kind of general right now to look the terrorist in the eye and say we're coming for you. We're coming for you. But it couldn't happen because now the Pentagon is politicized and the commander-in-chief, Barack Obama now, President Bush during the first areas of the War on Terror, they dictate who they want in control. And if they don't like your performance, you're gone.

KELLY: Has there been a softening of the command and control at least?

O'REILLY: Absolutely. Since Vietnam, generals have been tamped down, but that being said, Patton had a lot of trouble with Eisenhower. A lot of trouble.

KELLY: One of his problems was he couldn't manage up.

O'REILLY: That's right. And Eisenhower did not like Patton's defiance. He liked his audacity because Patton saved Eisenhower's butt on a number of occasions, but he didn't like the disrespect, and he didn't like the fact that Patton would sometimes ignore orders. You don't want that. But you want the Patton point of view in the war on terror. Again, we're coming for you. The guy who cut off the head of the journalists, we're coming for you. And that fear is absent in the United States government right now.

KELLY: What about you speak, you know, sort of, of the challenges that he faced in the battle of the bulge.

KELLY: Do you think nonetheless Roosevelt forged on. We're starting a war right now in Syria, or participating in one that the terrorists started. Do we have the stomach, does the American people have the stomach for those kind of losses in a battle this big today?

O'REILLY: No. And that's not going to happen until somebody sets off a low level nuke in Cleveland and kills 200,000 Americans. Then Americans would rally. That's what happened in World War II.

KELLY: You think that could happen?

O'REILLY: That could absolutely happen if Iran develops a nuclear weapon. They could weaponize it, so that could happen. So, if that did happen and the United States would rally as they did after Pearl Harbor and Hitler, OK? But George Patton knew he had to win. It was like Ulysses Grant in the Civil War. And he was willing to sacrifice the lives of thousands, tens of thousands of his own men. But his own men, they loved him, despite that. Because Patton was a leader, he was in the forefront. We opened the book "Killing Patton" with the only battle in World War II that he didn't win -- that Patton didn't win. It was a stalemate. He didn't lose it. And the hellacious fighting, the hand-to-hand combat. And I think Americans got to know what this is all about. But your question is a good one. Right now we -- the people do not have the stomach to do what's necessary to wipe these terrorists off the face of the earth.

KELLY: When I read about him, I didn't know that much about him before the book. But he's daring, he was brave, audacious, as you point out, rude, no respect for authority.

KELLY: I was going to say, it reminds me of someone I know? Is that why you chose him?

O'REILLY: No, Patton's a lot braver than I ever experienced. He was an extraordinary man. I chose him because he was the best general in World War II. And they said he died from an accident, that's not true.

KELLY: He was supposedly in a car accident and died thereafter.

O'REILLY: We believe, Martin Dugard and I believe he was murdered. And we lay out the chase in a pre-methodical way. We don't tell you that we know for sure. We present you with you the evidence. You can decide, but I do not believe he was killed in an automobile accident.

KELLY: Last question. You got millions of dollars, you have the number one show on cable news. Why do you continue writing all these books?

KELLY: Where do you find the time?

O'REILLY: You know, I don't sleep very much. We have a very methodical way to write these books. Dugard does a lot of the research, almost all of it. And then I fashioned it into, kind of, a thriller and put you right in the bunker with all lay off.

KELLY: Tip off the hat at him. Good for you Martin. You work with this guy every day.

O'REILLY: Yeah. He loves me.

KELLY: You put up with all his nonsense.

O'REILLY: Dugard loves me. Are you kidding?

KELLY: Sure he does.

O'REILLY: You know how much money I made him?

KELLY: Can't manage it up, but managing down. Dugard, Martin, let's talk. Thanks, Bill.

O'REILLY: All right. Thanks for having me on your fine program.

KELLY: He couldn't even come to my studio. He had to made me do it in his. See what I have to deal with.