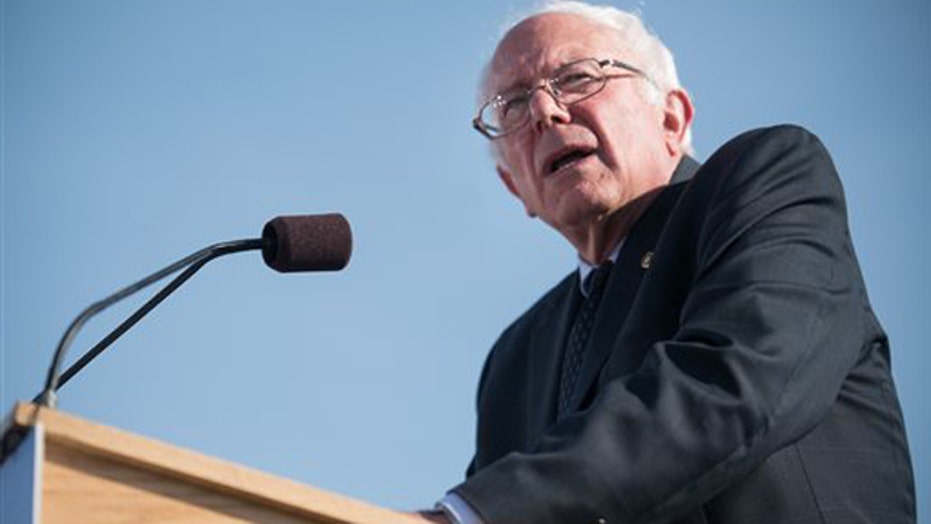 Is he right or wrong?

Bernie Sanders and a 90 percent Tax

John Layfield: France tried what they called the super tax and the economic minister of France says we are now Cuba without the sun. And that is exactly what they turned out to be. Bernard, the richest citizen in France, moved out right away. An actor famously moved to Belgium and then Russia. The rich exiting. So now instead of having a 75 percent tax rate, you had zero. Businesses in France have said they cannot recruit people to come to work there because of the high tax rate. It's too onerous on their businesses. You're seeing France going back into recession. And president Hollande has the lowest approval rating of any president since World War II. There are two problems with this comparison. First of all, there are massive loopholes. Second of all, a railroad tycoon cannot lead the country if you have a tax rate that is so punitive. This income inequality, this is garbage with the tax rate. What you're saying is a person who has $100, you're going to take $90 away so the person who has $10? They have income inequality. It is socialism. It has not worked anywhere in the world.

Jehmu Greene: You can tell by Jehmu's expression that deep down she doesn't really believe in the 90 percent tax rate. She just thinks this is goofy stuff. And it is. You talk about a three martini lunch. If your spouse traveled with you on your business, you can deduct that. Life and the income tax code was a lot different back then. You see, the money then that you need in today's dollars would be about $2.4 million. There are very few people paying that. Those people that were making that had so many loopholes, as john talked about, and deductions, that 90 percent, that was on about the last $5 those people made.

Gary B. Smith : The shareholders are in this to make money. They are not in this for altruistic reasons. They don’t want to save the planet, they want to make money. That’s what shareholders do. Unions are in this for survival. That was about it. No one paid 90 percent back then. So for Jehmu on the left and Bernie sanders, crazy Bernie sanders to argue it worked back then, no, it didn't. Because we actually didn't do it. Right now, if we did it, you know, guys like Elon Musk, Bill Gates, they wouldn't exist right now because they'd say, oh, my gosh, my fortune is being taxed at 90 percent, no thank you. I'll move on and do the next thing.

Ashley Pratte: It cripples it. We're going to see jobs lost. As a result, we're going to see our nation's richest people leaving. The ones who are supplying a lot of these jobs. I think that's something that, you know, Bernie doesn't recognize here. And honestly, bye-bye Bernie instead of bye-bye wealthy people. Because we need them to keep our economy going. And right now we can't afford to lose any more jobs. We have one of the highest unemployment rates, even though the president wouldn't tell us that because he's not accounting for all those people who are no longer getting in to those lines anymore because they've just given up hope. Is that an economy we really want to kick back into recession. I mean, these numbers are just startle startling. Do we really want to say now those investing at a time like this, it's not going to compel them to take any risks. We're going to see jobs lost. We're going to see capital down. I mean, it's a terrible, terrible idea. I just think it's absolutely crazy. But we're at a point in time now where the president has come out and called for these minimum wage, arbitrary hikes to $15 and let's tax the rich.

Jonas Max Ferris: Look, there's a lot of negatives to it. It's not really the drag. Because that is what happens. The actual percentage of income the government collected from income tax was as high under Clinton towards the end as it was when we had a 94 percent tax rate. So you don't actually bring in more money. What it does cause is a lot of garbage and moving money around and expositive stuff to expand and invest in all kinds of garbage just to take write-offs. Oil ship partners we had in the '70s. There are a lot of negatives. There are some positives which we should talk about. When you have a 90 percent margin rate, as crazy as that sounds, it does let you hire more people. Why would you do extra work if you're only going to keep 10 cents on the dollar when you can pay someone a tax deductible expense and they would do the work for you. So there's an element of that. The actor example, look, those guys are not like our billionaires. Our billionaires have capital gains and untaxed wealth. They're not getting in their jets with the 90 percent income tax rate. He is not a billionaire who sits on capital gains. It's the guy making $2 million in salary, the tom cruise of the world, that might move to some other country. I'm not saying this is a good policy but let's be realistic about the damage it would cause.

Ashley Pratte : Certainly. I think what we have here is proof that five of the most dangerous Taliban pretty much leaders were let go for a trade for a potential deserter and yet there are no rush 50 issues here. This is definitely one of the biggest blunders of his administration by letting them go. I don't understand here how he thinks that it's okay to put the American people in the country at threat, at national security levels here, because of the fact that he chooses to let them go and release them. And I think that that is one of the biggest issues we see right now, given the fact that this president always is happily ready to claim victory for killing Usama bin Laden. Why let five of his dangerous friends go and then, you know, potentially cause harm to the American people.

Jehmu Greene: Well, given Ashley’s Obama hate, she probably doesn't take into account there were 500 prisoners released under the bush administration. And there's a chunk of all of them that have gone back. I think it's around 10 percent. But here is what president Obama did. He stood by the bedrock principle of our military. We are America. We do not leave anyone behind. Even if you are a schmuck, we do not leave you behind. He cannot be held accountable. He can now go to prison. But we do not leave people behind.

John Layfield: That's absolute ridiculous argument. It's not a recruiting tool. Come on. You release the dream team back to the terror zones. You close the prison in southern Iraq in about 2011. That is the leadership of ISIS right now. So what does it cost to keep those guys here? A lot less than it costs to go back and these guys become the leadership of ISIS. Whether it's Gitmo or somewhere else. You can blame Bush, you can blame the sun being in your eyes and your shoes being untied. These guys going back and putting harm to Americans is a shame. Our president unfortunately is a five foot guy in ten foot of water when it comes to foreign policy.

Jonas Max Ferris. I think we're not characterizing -- look, a lot mistakes for the administration. The main difference is bush put them in prison presumably for life, i guess we're going to keep them at 2 million a year per person. Obama's been flying drones and blowing them up in the fields. That's the main difference. I think that policy is better than imprisonment for life at taxpayer cause. Blow them up in the field with drones. That is what Obama’s been doing. Not putting them in prison for life. Close Gitmo. More raptors in the air. That's what i would say.

Gary B. Smith: Look, Jonas makes some good points, but unless we institute a policy and Obama’s not come out and said look, we're just going to outright kill all our, you know, enemies with drones, we need to keep Gitmo open. John alluded to it. What is the cost benefit of this? Yes, it's incredibly high. $2 million a prisoner. What was the cost of 9/11? Trillions of dollars when you take into account the damage, the impact to the economy, the stock market and all that. I think that's a pretty good tradeoff.

Texas Floods and the Green Agenda

Gary B. Smith: It's like in the late 1800s when they were selling snake oil. The fact is, the temperature change from 1998 to now in the world were one degree cooler. There's been no perceptible shift in the climate. In fact, though, the government bills us $22 billion a year to fight a problem, a, we don't have, and b, they don't know how to solve. It is the snake oil salesmen of 2015.

Jehmu Greene: We, he said snake oil salesman. Think these are scientists. I'm not sure where Gary got his climate change degree. We can't keep our head in the sand. Climate has been disrupted. We're seeing that impact. I April blocks away from where serious flooding happened in Austin, Texas. And we keep seeing these issues and if we want to say we're afraid of the truth, that's one thing, but denying it, not effective.

John Layfield: Look, 1935, there was a much worse flood in the state of Texas. 1931. Millions died. 1900, You had a hurricane hit Galveston. One of the worst natural disasters. The disasters have been going on. What kills the climate change movement is the fact they use them for political motives. I agree, we're putting stuff on the air we shouldn't do. We should have an alternative to fossil fuel future but if you're use this for political reasons, and your front man, Al Gore, anything he says, people want to disagree with.

Jonas Max Ferris: In the 1500s, it was drier than what it is now. All i know is there's no solution to manmade causes. We were not going to stop them from burning stuff in china. The insurance industry in America is very worried about this change and wants to do something about it. We have to get ahead of it and not just argue about it. You have to get ahead of it. So you don't have billions of dollars in damage every year.

Ashley Pratte: My heart goes out to those in Texas and dealing with this right now. But I also don't think this is a policy window for anyone to use destruction and tragedy to be able to bring about climate change initiatives right now, especially as Gary had mentioned science right now is not on the climate change side. And it's a natural disaster. That's exactly what it is. Nature.