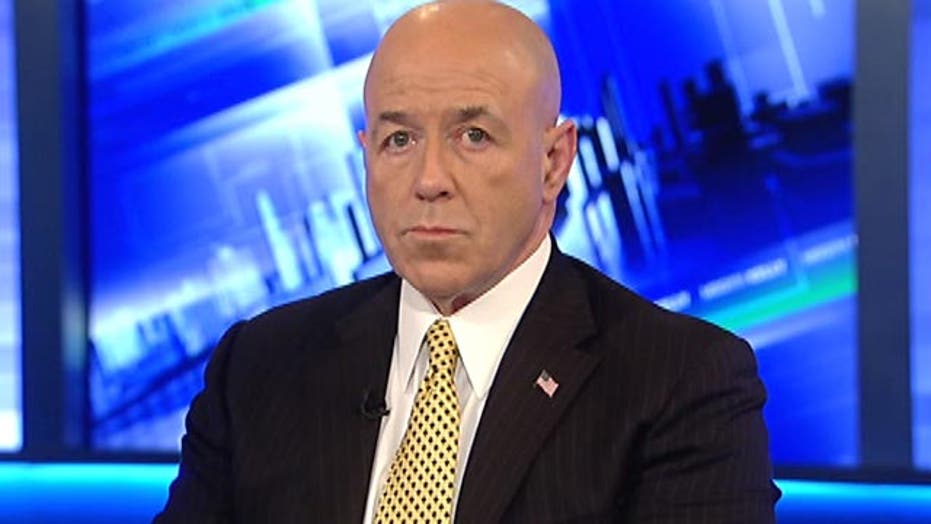 Bernard Kerik speaks out on response to NYPD murders

This is a rush transcript from "The Kelly File," December 22, 2014. This copy may not be in its final form and may be updated.

MEGYN KELLY, HOST: We begin with the man who was leading the New York Police Department during 9/11 who watched as these officers so relentlessly criticized of late had to bury dozens of their fellow cops, men and women who gave their lives in an effort to save the people of this city, a city that used to support its police officers but is now being pitted against them.

KELLY: Let's start with that montage of comments we heard. You wrote a piece today in Time that says a war is being waged in this country right now. A war on police. Explain.

KERIK: It's a war on police that's based on a lie. It's a war on police that's then perpetrated by people that have said over the last two months that there is pervasive racism in the NYPD in policing across this country that police officers go into minority communities to target and harass minorities. Those are lies. Those things are lies. Cops go into minority communities where the crime is the highest to address crime.  They're not targeting minorities. They're not harassing minorities. They go where the crime is. In this city they went where the crime was. They reduced violent crime by 80 percent and 85 percent. They reduced homicides by 80 percent.

And this whole pervasive racism thing, we flipped this entire country upside down over two incidents, both of which there isn't one shred of evidence, not one shred, that says they were related to race.  And tragically in the Garner incident in New York, Garner's mother -- Garner's wife and Garner's daughter, who I feel terrible for, they themselves admit it had nothing to do with race.

KERIK: Yet we continue to hear Sharpton and de Blasio and others bashing this drum that cops are racist.

KERIK: And I think it's wrong. This whole war on cops, the assassination of these two cops is all based on lies.

KELLY: But to take it the next step and to suggest, as you did in your piece, that the assassin believed the lies perpetrated by de Blasio and Sharpton and others -- that's what you argued -- aren't you taking it too far?  This was a madman. How can you attribute his behavior to anything a politician said?

KERIK: You know what? When you're a politician and you're a true leader, you can't make reckless statements. You can't make statements to the public that can be interpreted by some lunatic like this guy that's going to use what you said, he's going to believe what you said, and he's going to go out there and assassinate cops. You have to control your rhetoric. You have to make sure what you're saying is the truth. It's not truth. These were lies.

KELLY: The discussion of race, Al Sharpton getting up there and saying that there was no deadly threat posed by Michael Brown in Ferguson.  Which all the evidence was to the contrary. This police officer testified, many witnesses, African-American witnesses, at least five of them testified, that it was as the cop said it was. But let me finish the question. Eric Holder, his most incendiary remarks were not on camera but he's repeatedly talked about how racial profiling is a big problem in these police departments, bias is a problem in these police departments, he's going to go after these police departments, he's been the victim of it himself as a black man. He talks about it in the context of Ferguson and Garner in Staten Island here. What should they be doing? What should they be saying? Al Sharpton is just wrong on the facts, but Eric Holder has a personal experience, how is that stoking the fires?

KERIK: It's stoking the fires because they're taking incidents and taking them out of context. I am confident that the Attorney General knows all of the details surrounding Michael Brown. I am confident that Al Sharpton knew all of the details concerning Michael Brown. Michael Brown was not an innocent young man like Al Sharpton portrayed when he was standing up there yelling into a microphone. He was not. He attacked the cop. He attempted to take his weapon. He assaulted that cop, resisted arrest and even after being shot in that confrontation he charged and attacked that cop again and did not stop until the cop fired repeatedly --

Let me ask you this, because whether you believe those are the facts as you stated in Ferguson or not, we've seen thousands of people protesting in Ferguson, in New York City, saying black lives matter, black lives matter. They believe this narrative, apparently.  They are buying this. My message is okay. They have something to say.  The cops too have something to say. And yet they are coming under criticism tonight for turning their backs on the mayor.

KERIK: Here's the difference. Those protesters have something to say. And they're protesting because they heard from our government's leaders that their cops are racist, the cops are targeting minorities. If you listen to that, and you believe that, then you have something to say.  The problem is, you don't have the leadership in this country right now that are saying hold on.

We have -- in thousands upon thousands of really good cops in this country that go out and risk their lives. And we need to support them. We need to give them the benefit of the doubt. And if we find out that there's a racial issue in some department or regarding some cop, fine, we take action. But do not broad brush the entire law enforcement community as racist as they have, infuriating and inciting these protests that have led to the destruction of communities, assaults and attacks on cops and the outright assassination of two New York City police officers.

KELLY: Do you believe Mayor de Blasio needs to step down?

KERIK: I don't find -- I personally I believe that we'd be better served with another mayor. That's my personal opinion.

KELLY: He doesn't have the support or the confidence of the police as far as you're concerned?

KERIK: No, absolutely not.

KELLY: What are they saying to you? You know these guys.

KELLY: The head of the union.

KERIK: It's extremely -- I've been around this city for 30, 35 years. I've never seen any dissension between the police and a mayor like this. Never.