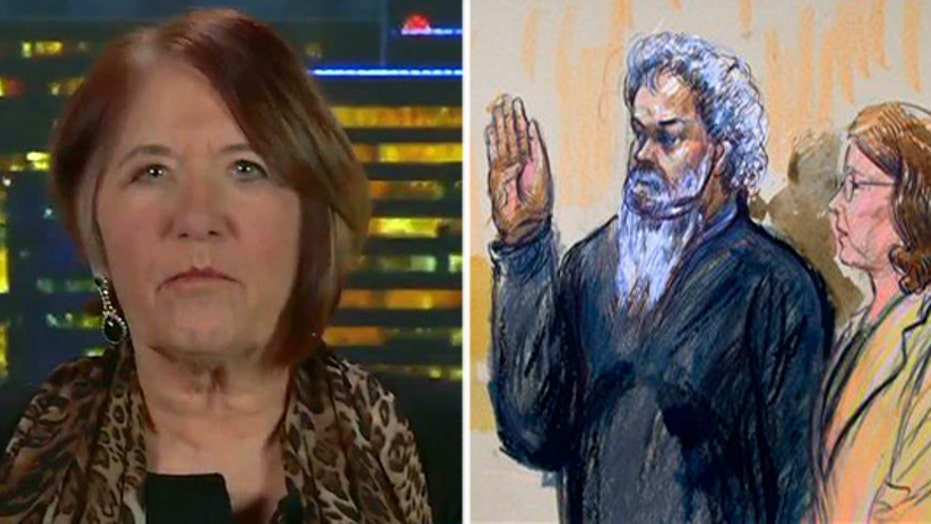 Pat Smith says Abu Khattala should be put to death

This is a rush transcript from "Hannity," June 30, 2014. This copy may not be in its final form and may be updated.

SEAN HANNITY, HOST: Welcome back to "Hannity." The suspected ringleader of the 2012 Benghazi terror attack, Ahmed Abu Khattala, pled not guilty in federal court over the weekend. But why is the man allegedly behind the death of four brave Americans being tried and Mirandized in a U.S. court and not at Gitmo?

Joining me now with her take is Pat Smith. She lost her son, Sean, who was killed in that attack. Pat, welcome back. I appreciate you being here. I know how tough this for you. This keeps coming up.

Here's my first question to you. For 21 months, Reuters, The Times of London, The New York Times, CNN and Fox News, our very own channel, interviewed this guy in broad daylight in public. If they can find him, are you angry that it took so long for our government to find him?

PAT SMITH, MOTHER OF SEAN SMITH: Well, it seems that that's what happens when the government gets involved. They don't do anything. They talk a lot and they do no action. They tell you everything that they're going to do if they ever catch somebody, but that never happens. This guy should be in Gitmo and he should stay there!

HANNITY: What do you think of a guy that's a terrorist that killed your son, not an American citizen, but he's going to be tried in an American court? That's the part of this that makes no sense to me. And I wanted to get your take.

P. SMITH: OK. I think that this guy should be in Gitmo. I think he should be tried. And after he is convicted, then he should be put to death at Gitmo. And I'll push the button.

HANNITY: You've been very critical on Hillary on this. What is your reaction...

P. SMITH: I believe that Hillary was in charge of all of this stuff, and she did nothing that she would admit to to stop it from happening. My son is dead because of Hillary, and she has not taken the time nor the energy or anything to talk to me. She will not talk to me. I am not part of the immediate family, according to her. The only thing she'll talk to is how much money she doesn't have.

HANNITY: How could -- how could she say -- you're the mother of this young man. How did she argue that you're not part of the immediate family?

P. SMITH: That's what they've been telling me all along. I've been asking that same question.

HANNITY: Remember they didn't invite you...

P. SMITH: ... part of the immediate family. I remember the labor pains, every one of them.

HANNITY: Yes. But I remember you weren't even invited to D.C. at that point, and we invited you as our guest.

P. SMITH: You're exactly correct. You're the only one that cared enough to do anything about it. They wouldn't even answer me as to why I can't come.

HANNITY: All right. Pat, I'm sorry. I want to get to the bottom of this, as you do. And this guy, you're right, should get the death penalty.  Thank you for being with us. And good to see you again. Thank you.