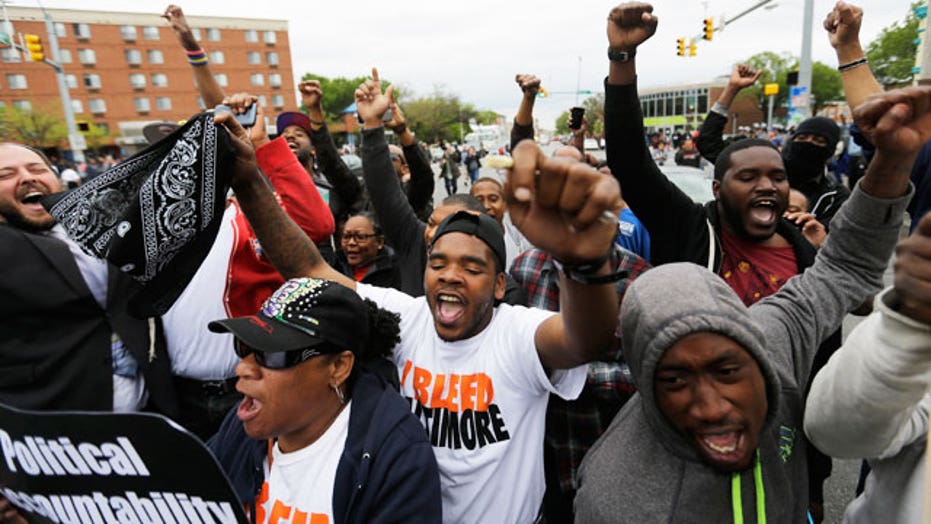 Baltimore: the next chapter

Hi, I'm Juan Williams. Thanks for watching this special edition of THE FACTOR, "Baltimore: The Next Chapter".

We begin with breaking news. You are looking at the streets of Baltimore tonight hours after charges were filed against all six officers involved in the death of Freddie Gray. Charges ranging from second degree murder to involuntary manslaughter, false imprisonment and assault.

Baltimore City states' attorney Marilyn Mosby laid it out today saying there was no probable cause to arrest Freddie Gray, that the knife he had was legal under Maryland law and that police failed to get Gray medical attention.

MOSBY: The manner of death deemed a homicide by the Maryland state medical examiner is believed to be the result of a fatal injury that occurred while Mr. Gray was unrestrained by a seat belt in the custody of the Baltimore Police Department's wagon.

WILLIAMS: All six officers have been arrested. But an attorney for the Fraternal Order of Police speaking on behalf of the six officers is denying any wrongdoing on their part.

MICHAEL DAVEY, BALTIMORE POLICE UNION ATTORNEY: Let me state in no uncertain terms that Lieutenant Rice and all of the officers involved at all times acted reasonably and in accordance with their training as Baltimore police officers. No officer injured Mr. Gray, caused harm to Mr. Gray and they are truly saddened by his death.

I believe that the publicity in this case is driving force to a rush to judgment and causing this prosecution to move so quickly.

Leland -- you have been doing a great job. I want to know what's going on in the streets right now. We now know that these officers, this is the latest. Three off them are black; three are white. Is that causing any reaction, response on the streets tonight?

LELAND VITTERT, FOX NEWS CORRESPONDENT: You know, I have asked that very question -- Juan, on the streets of Baltimore a bit. Now look, if you didn't know, like the Ravens had just won the Super Bowl or something. I said does it matter whether the officers are black or white. A number of folks said no, the only thing that matters to us about he police is that they are one color and that is blue.

EDWIN, BALTIMORE RESIDENT: Definitely excited to hear what they there are officers have been charged with the counts that they have been charged with. I think Mosby has done an awesome job. And, you know, at the end of the day this is a great city. And I just feel like all the celebration is coming from -- it's a little early. It's a little early. But it's a step in the right direction, not just for Baltimore but for America as well.

VITTERT: There was a moment that we saw here. There was hundreds of cars that walked past and thousands of people that walked past us standing here. And there was a couple of kids on top of the cars and I saw this a number of times happen. Flip the police the bird and yell at all of these officers who were standing here. "F the police", "F the police" -- those type of things. What is that a symptom of? What does that tell us about the level of anger on the streets?

EDWIN: The level of anger is high. It's high for me. I haven't had police brutality but I certainly have been profiled plenty times. I understand where it comes from. It's awful to go through. I think if I deal with it in my suit every day, in a nice car I think these kids with their pants sagging deal with it way worse than I do. They got a reason to be upset.

WILLIAMS: ask just quickly about the fact that the officer who is facing the most serious charge, second degree murder charges is a 45-year-old black man.

VITTERT: This is something that's interesting that's been brought up Edwin. The officers face different charges, you know. The officer who faces the most serious charge, second degree murder, the man who was driving the police wagon -- he is black. He's 45 years old. Does it matter whether officers are black or white who are involved in this case to you?

EDWIN: That doesn't matter at all. You know, it goes both ways. What I will say is that I'm not exactly sure that the driver is the one that needs to be looked at. Certain live we should look at him but I'm more concerned about what happened to him prior to getting in the vehicle. On the way to the vehicle it looks like his back was broken in the first place.

VITTERT: You know, one thing that's happened that we have found on the streets here, Juan, is that a lot of folks think that the trial should be held this afternoon almost. People are ready for some very quick justice here. We know that's going to take a couple of months.

But I want to ask you, Edwin, in the sense that -- if there is a trial, you have a very diverse population. You're going to be a diverse jury. You have a black prosecutor in this case, obviously. If there's an acquittal, do you think the city is going to live by that or are we going to see something like what other folks have told me about, like what we were talking about Rodney King?

EDWIN: That's a very good question. I think there is going to be a major blow up in the city if that doesn't happen. It's bigger than Baltimore. It's America. This happens time and time again and it needs to stop. And I would be afraid to see what happens here if we get an acquittal.

WILLIAMS: Leland -- Leland let me close with you --

WILLIAMS: Leland, I want to know about there's some of the reactions on the street. You have been doing a terrific job of reporting from the police unions. I want to know what you are hearing from the police officers. Has the decision to charge the officers today made it difficult for them on the streets? You describe people now flipping the officers off and cursing them out. Is it harder to be a police officer in Baltimore tonight?

VITTERT: That's a great question, Juan. And I think it cuts both ways. I think in some ways it's easier to be a police officer because there is not the level of rage. There is sort of this sense of lawlessness and freedom. But not in terms of rioting and looting, we saw people driving their dirt bikes and doing wheelies down the streets and sort of blowing off steam. But there hasn't been any rock-throwing and so far there hasn't been any looting going on.

Of course, the big question is going to be what happens when all of a sudden we get towards curfew time, do all the people who are out in the streets and the thousands who walked by earlier actually decide to go home and in the sense of is it harder for police officers?

I would answer that yes as well because I think there's a lot of police officers who feel like these guys were made to be scapegoats in one way or another. Everyone agrees that Freddie Gray shouldn't have died but people think that there was a real rush here in terms of the prosecutor charging these officers and also there is a lot of people, including the Fraternal Order of Police that has come out and said that the prosecutor should recuse herself because one of her mentors, someone who has given a lot of money to her campaign turns out to be Freddie Gray's family attorney.

And the Fraternal Order of Police said that the mere appearance of impropriety there should have meant a special prosecutor and more investigations. After all it only took 24 hours from the time that the police got the report and gave it to the state's attorney and we saw those charges.

JUAN: There is no way Leland -- there's now way that you can separate the politics from this but at least now, there is much transparency and it was done in an expedited manner. We'll see where it leads.

Leland -- thank you so much for coming in.