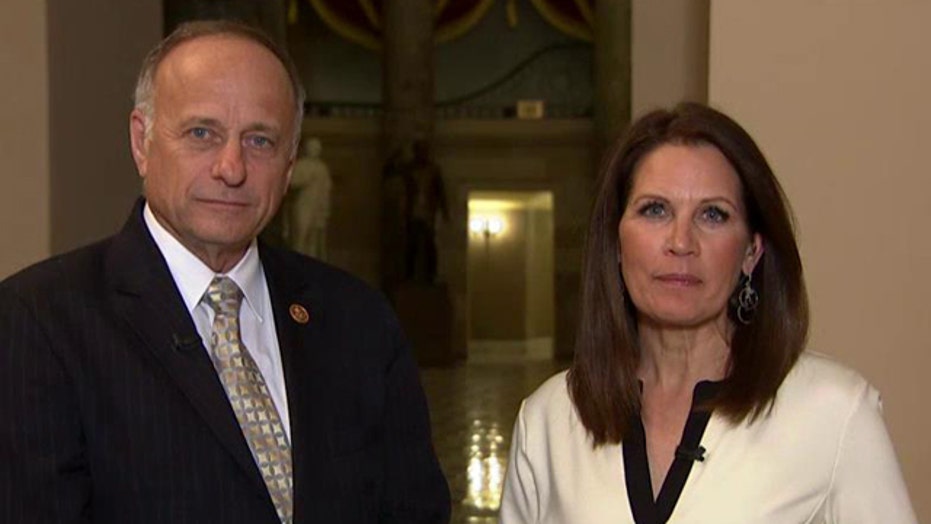 This is a rush transcript from "Hannity," December 11, 2014. This copy may not be in its final form and may be updated.

SEAN HANNITY, HOST: And this a Fox News Alert. A government shutdown has been avoided. A short time ago, the House passed a $1.1 trillion spending bill that was supported by both Speaker Boehner, President Obama -- let's see, Harry Reid and Vice President Biden.

And as you can imagine, this measure did not sit well with a number of conservatives, including me and including Congressman Jim Bridenstine. He put out this tweet explaining why. I think it quotes it very well. He says, "Here are just five of the main reasons I will be voting no on the CRomnibus bill, which fully funds Obama's executive amnesty, fully funds ObamaCare, over 1,600 pages long" -- actually 1774 -- and spends $1.1 trillion filled with political favors.

That pretty much sums up how I feel about it. I know you guys tried to persuade the speaker and leadership all day to go for a short-term CR.  What is the possible explanation why they would not do something that was so smart that would have given them more leverage and power come the New Year?

REP. MICHELE BACHMANN, R-MINN.: Well, I think the reason why they did it is because the political establishment made a decision months ago that they were going to get amnesty and they were going to pay for amnesty. The executive amnesty is what they didn't like, President Obama doing it alone. But they wanted amnesty.

Let's not mince words. Both Republican and Democrat, the leadership, the establishment, wanted to have this amnesty...

HANNITY: Hold on. Are you saying, Congresswoman, that this deal was struck, I would think back in September, when they decided -- remember when they decided to move this deal to December -- I forget the exact month. But you're saying that you think John Boehner sat in a room with Barack Obama and said, we want it, too, a wink and a nod, this is how we'll do it? You believe that happened?

BACHMANN: The political establishment wanted full-on amnesty. They were going to get it one way or another. They wanted it all done before the new Senate was sworn in.

But again, I think the main thing we need to know is this vote never, ever, ever, in any parallel universe would have happened the week before the election. It wouldn't have happened.

BACHMANN: And so this is very disrespectful...

HANNITY: That's such a good point.

HANNITY: That's such a great point. You know what? If they did this before the election, it would have probably impacted the results in a lot of places.

Let me go to Steve King -- $2.5 billion for illegal immigrants and ObamaCare is funded through the fiscal year. That's -- that's a conservative speaker? I don't think so.

REP. STEVE KING, R-IND.: Well, there's no way it can be a conservative position, Sean. And you know that we've fought this funding for ObamaCare for a long time. I brought an amendment to cut off all the funding to implement or enforce ObamaCare as far back as February 14th, 2011. And much of the same tactics that we're facing today -- we've seen the same pattern throughout all of that.

HANNITY: All right, I have less than a minute...

BACHMANN: All I can tell you is this afternoon, the speaker gave a meeting -- a private meeting to Steve King and I. We offered a positive alternative that would unify the GOP and get this deal done. John Boehner told us...

BACHMANN: ... he was going to do the CRomnibus.

HANNITY: Do you believe a deal was cut here? Did John Boehner make a deal with Obama?

KING: I think yes. I think the deal was made and the die was cast, and no good ideas outside of that deal were going to be considered, unless we could have succeeded on taking the rule down, and at that point, we would have had a new ballgame and I think we had a chance. But when we failed by a vote to take the rule down...

BACHMANN: But we were close.

BACHMANN: We were close.

KING: That's when we lost.

HANNITY: All right, guys. Thank you both. It's a sad day that John Boehner doesn't realize that there was an election, the people have spoken.  And you're right, Congresswoman, if this vote took place a week before the election, this never would have happened.

BACHMANN: Never would have happened.

HANNITY: That speaks volumes about politics in Washington and how John Boehner has disrespected the people that voted for all those Republicans tonight. That's my take on it. Thank you both.