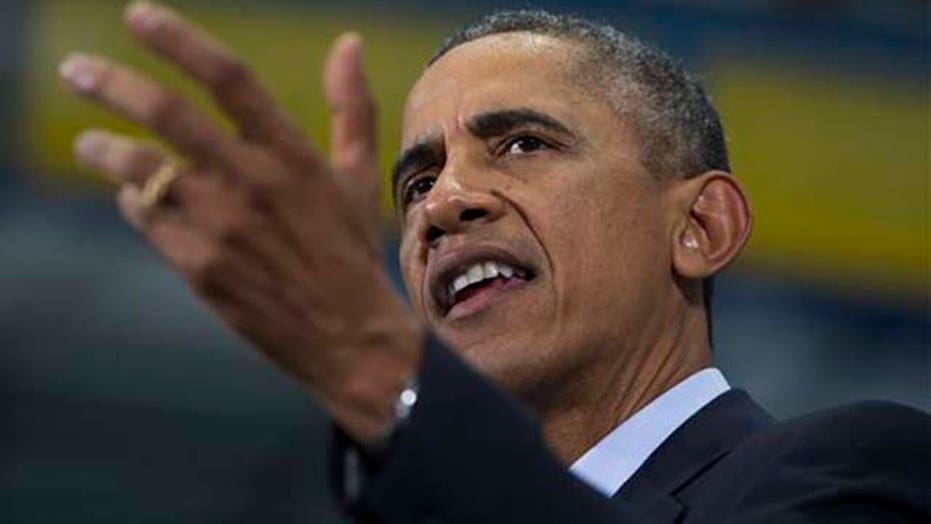 Are President Obama's policies on the midterm ballot?

This is a rush transcript from "Hannity," October 27, 2014. This copy may not be in its final form and may be updated.

SEAN HANNITY, HOST: Democrats continue to distance themselves from the president and his policies. Take a look at DNC Chair Debbie Wasserman Schultz and her absolutely refusal to answer a very simple, basic question about that yesterday. Take a look.

CANDY CROWLEY, CNN: Is this election about President Obama's policies?

REP. DEBBIE WASSERMAN SCHULTZ, R-FLA., DNC CHAIR: This election is about making sure that we elect a Congress that will focus on the priorities that people care about the most.

SCHULTZ: I let you finish, Reince.

SCHULTZ: Reince, I let you finish.

PRIEBUS: That was the question.

SCHULTZ: I agree with Darrell Issa, and what Darrell Issa said was that we -- about the Ebola crisis, is that we need to make sure that we recognize that we have to keep our people safe...

CROWLEY: What's on the ballot? Are they the president's policies?

SCHULTZ: Well, thanks, Reince. Maybe you can let Candy ask me the questions, rather than you.

PRIEBUS: And she's been doing a great job of it so far! Debbie still hasn't answered the question as to whether the president...

PRIEBUS: Are the president's policies on the ballot? Yes or no?

SCHULTZ: ... on anything but jobs and the economy are on the ballot.

PRIEBUS: Are the president's policies on the ballot?

SCHULTZ: Jobs and the economy...

PRIEBUS: Yes or no!

PRIEBUS: And things aren't going well, Debbie. Things are not going well in this country.

HANNITY: Like an old "Hannity & Colmes" show. Anyway, a new Republican National Committee ad is reminding voters that although Democrats might not want the president's policies on the ballot, well, he's the leader of the party, and his policies are, in fact, a huge concern.  Take a look.

All right, Trippi, let's go to the president. He said his policies were on the ballot. Take a look.

PRESIDENT BARACK OBAMA: I'm not on the ballot this fall. Michelle's pretty happy about that. But make no mistake, these policies are on the ballot, every single one of them.

HANNITY: Why don't Democrats want to admit they even know him or voted for him or agree with him when a lot of them voted with him 99 percent of the time?

JOE TRIPPI, FOX NEWS CONTRIBUTOR: Well, look, a president's policies are always -- they are what midterm elections are -- end up being about. They always have been, always will. The question is, Are they a big drag? Can they be a big plus? For some presidents, they've been big pluses.

This time around, it's going to be a drag on Democrats. What's fascinating to me about it is, as low as the president's approval ratings are, most of the Democrats in these races, as you pointed out with Bill Hemmer are, you know, yes, they're right in it. I mean, this is really nip and tuck in a lot of those races, Sean. So yes, is his policy -- are his policies impacting this? Of course they are.

HANNITY: Well, you've been in this game a long time.

HANNITY: If it's even or if the Republican even has a slight lead heading into the election, the odds are they're going to win that race, right?

TRIPPI: That's a very tough thing to come out from. And yes, what's -- part of what's dragging them down there are -- is the president's approval ratings and disgruntlement with policies.

HANNITY: Tucker, as put up on the screen here, the six Democratic Senate candidates -- their percentage of the vote with Obama. You got Pryor 90, you got Udall 99, Hagan 96, Begich 97, Landrieu 97, Shaheen 99.  So I would think that every one of their opponents is using that in every stump speech, right?

TUCKER CARLSON, FOX NEWS CONTRIBUTOR: Well, it's kind of hard to claim they're independent voices for their states.

CARLSON: I mean, they're -- they're like -- you know, like most members of the Senate. They're pretty much in lockstep with their party.  Their party's unpopular. I would say, though, to the Debbie Wasserman Schultz clip, which is actually giving me a headache just thinking about it, that the White House is campaigning, they're just not campaigning nationally. So they're doing ads on Spanish language media. The president's talking on black radio, for example, in Georgia. They're trying to get out the vote, but just to their constituencies. They're not -- they're only using dog whistles. They're not speaking to the broad population here because they know that they're unpopular. But among some certain demographics...

HANNITY: ... trying to get their base turned out, is what they're to do. Will that strategy work, or is the president too big a drag?

BRIAN KILMEADE, "FOX & FRIENDS" CO-HOST: Well, here's the thing. I agree with Paul Begala that the president's rusty, that he made two big errors in three days and it hurt his party. And I could not believe Joe Manchin, who I like -- I think he's a great guy -- he says, These moderate Democrats in these states who have constantly have gone against the president have found themselves in tough races -- listen, they're not moderate Democrats! There's no such thing! There's really very few moderate Republicans.

I mean, right now, you cannot run away from the track record of voting with the president. I actually think it's a character flaw within those senators. All they have to do is what Michelle Nunn finally did yesterday, I mentioned to you on radio. She goes, Listen, I agree with the president on some things and I disagree, he disappointed me here, this is where he didn't disappoint me.

KILMEADE: True, but today she got -- yesterday, she got it right. It took them two weeks, and no one else got it right!

TRIPPI: But -- but still, the point is Michelle Nunn is ahead and in it in Georgia...

HANNITY: She's not ahead anymore! The latest poll has her down by 3.

TRIPPI: In the -- that is a minor miracle, given the drag -- given the state and the drag...

HANNITY: There's a convergence of events in Georgia. And I lived there. I think ultimately, it goes red -- you're right, closer than people would have anticipated. But you have Jimmy Carter's grandson and Sam Nunn's daughter. These are well-established names in the state of Georgia.

HANNITY: There's no such thing...

KILMEADE: It's a close state that usually goes Republican.

HANNITY: And I think with the runoff...

HANNITY: ... the advantage goes to the Republican at that point.