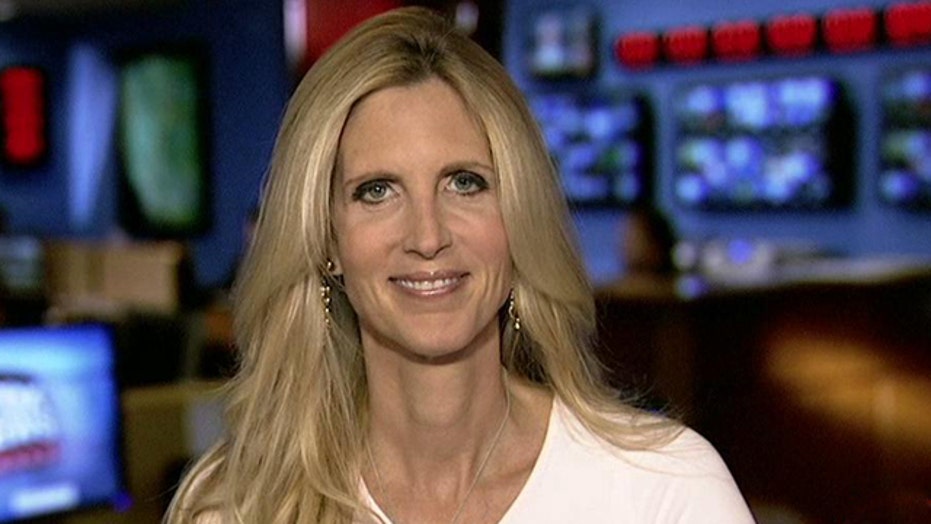 This is a rush transcript from "Hannity," May 27, 2014. This copy may not be in its final form and may be updated.

SEAN HANNITY, HOST: The Obama White House is scrambling yet again to control the latest round of scandals plaguing the administration from the outing of a covert CIA agent in Afghanistan to the embarrassing, disgraceful neglect of our country's military vets. So how could things possibly get any worse for the administration?

Here with reaction, author, columnist Ann Coulter. To me, the vet story is at the top, and the fact that there's no sense of urgency here.  But then you got the outing of a CIA agent, and which really put him and his family at risk, and you don't see the same outrage when Valerie Plame, who was not a covert agent, was outed. That angers me. You know, what could happen next, Ann Coulter?

ANN COULTER, COLUMNIST: Well, I'm looking forward to Valerie Plame's statement of outrage on this incident, and her useless husband. Maybe she'll get so angry that she'll force him to get a job. I agree the VA -- but Democrats never care about foreign policy, as I've said many times.  They consider it an irrelevancy. What they want to do is socialize everything, like health care. And you see with the VA scandal why Republicans don't want the government running everything, anything run by the government. It can be these veterans' hospitals. It can be the IRS.  It can be, you know, the National Science Foundation. It will be useless, inefficient. The people who are supposed to be doing their jobs will be sitting, watching pornography.

That's how the government works, which is why we want to give as little as possible to the government to do. I mean, even the Pentagon, even the Defense Department is constantly being ripped off by scamsters.  And you know, the $300 ashtray, or was it $300,000? I don't even remember.  We know there's going to be waste and inefficiency. That's why you limit the federal government to doing only those things...

HANNITY: Let me ask you this...

COULTER: ... only the federal government can do. But no, we're all going to be getting the same health care the vets are getting, under ObamaCare.

HANNITY: But that's the point. The obvious answer, if they had any sense of urgency, is every vet should be allowed to go to any hospital they want and get immediate care so that no other vets die because of this incompetence. But wouldn't that destroy the left narrative that they're capable of running health care? Wouldn't that put a big hole in their big argument?

COULTER: Well, yes! I mean, all these left-wing economists, including Paul Krugman, cited the VA hospital system as the model for socialized medicine and ObamaCare. And isn't it going to be fantastic, and it runs so well. No, we knew it wouldn't run well. We knew it would run like the VA hospitals, anyone who knows anything about VA hospitals.

How about letting us all go to whatever doctor we want to, and how about letting us all go to whatever hospital we want, instead of destroying health insurance in America, which is what ObamaCare does? It simply -- it has -- it has -- it has made health insurance illegal, and instead, we have a welfare system that we pay for through our insurance premiums, which makes ObamaCare the most regressive tax in world history. I pay the same health care premium as Michael Bloomberg does, and he has a lot more money than I do.

At least with other programs to pay for people who can't pay for themselves, there's a general welfare program. People, you know, are taxed according to their income. There's one central program. No, here I'm going to pay for everyone else's health care and their smoking cessation programs...

COULTER: ... and marital counseling and everything else through my insurance premium, which is not only astronomical, but prevents me from going to the doctor I want to and the hospital I want to! And why does this affect me and not most people watching right now? Because those waivers are working.

People are going to go to the voting booth this November without realizing that their health insurance is about to be made illegal, they will not be able to go to the doctor they want, they will not be able to go the hospitals they want. It's only the individual self-employed like myself, a few million in America, who are already subject to the provisions of ObamaCare!

HANNITY: I would actually suggest they set up a hotline for vets, or a Web site. But we know that's impossible for them to pull off. So...

COULTER: Well, also, what are you going to do, do that for the entire country? We're all going to be under government-run health care!

HANNITY: Well, I'm saying in the immediate -- in the short term, we got help the vets. But in the long term, that ought to wake up every American. If they'll do this to American vets, they'll do that to every American, which is your point!

HANNITY: And it will happen.

COULTER: Yes. Now can we talk about the Santa Barbara killer, since I have actually read his 141-page manifesto?

COULTER: Thirty seconds? What am I going to say in 30 seconds? OK.  Contrary to what they are saying on all of the other stations about this being an example of misogyny or the problem with seeking wealth in America -- no, this is a problem, as all the rest of them have been, of schizophrenia. It is manifest in his writings and what people say about him. And until the country gets serious about doing something with the mentally ill, not Asperger's but schizophrenics, you're going to keep seeing these mass murders.

HANNITY: Hey, you know what? It wasn't just a gun. Three people were stabbed to death.

COULTER: No! More of the casualties were from cars and knives.

HANNITY: Exactly. All right, Ann, good to see you. Thank you, as always.