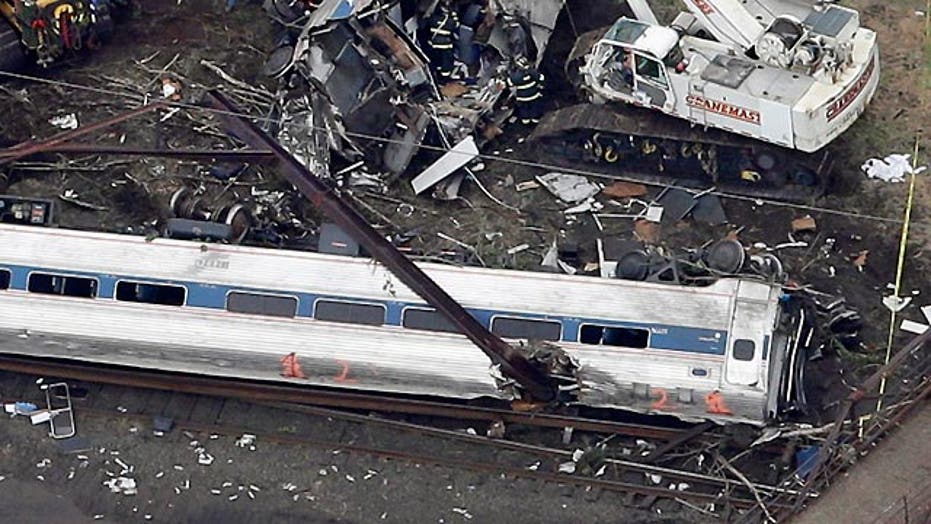 This is a rush transcript from "Special Report," May 15, 2015. This copy may not be in its final form and may be updated.

HOUSE MINORITY LEADER NANCY PELOSI, D-CALIF.: It would have funded positive train controls at the president's budget level, $825 million. That was voted down.

SHANNON BREAM, GUEST ANCHOR: All right, we are back with our panel. Let's start off with Amtrak. By the way, we are getting updates from NTSB that the engineer who was running the train at the time has been cooperative with them. They're also investigating some kind of reports there may have been a rock or a shot fired at the train. So a lot of things developing minute by minute.

Something that's not developing is well-established in reading so much about government assessment about Amtrak's doings. Jonah, I had no idea, because I enjoy riding the train all the time, that it loses so much money. Since 1971, since its establishment, it's never broken even. It's always lost money.

JONAH GOLDBERG, NATIONAL REVIEW: Right. And they predicted that it was going to break even in three years. And it always loses money. And a past head of Amtrak said it will never be profitable. And I find this entire spectacle ghoulish and outrageous. We can talk about positive train control, which was not on that -- was not missing from that train because of a lack of funding. It was a technological issue. But the idea that somehow this accident makes the case for high speed rail on the west coast is absolutely insane. All high speed rail does is it loses money at three times the rate of conventional rail.

BREAM: The numbers don't lie. These are government agencies, nonpartisan agencies, Chuck, that have said, for example, that they're losing $80 million a year on food service and that $7 million of that, they say, is from employee theft of food. It's not that good. So I don't know about stealing it. But you've had it. Jason knows what I'm talking about. It's not worth stealing.

CHARLES LANE, THE WASHINGTON POST: I'm with Jonah. I find it ghoulish to talk policy as it were with the dead bodies of so many people. But having said that, I think the case is strong for the northeast corridor for passenger rail. It's densely populated. There are a lot of stops. The ridership is up. But the system wide subsidy is obviously a big waste of federal money, and Congress interferes with the spending to make sure it goes from this district and that district so they don't even get the maximum out of the money that they do spend.

I want to say one other thing about rail. It's 19th century technology fundamentally. The idea that we're going to move large numbers of people through these trains is just not on. And the reason it's going to lose money is we have trains and planes and cars to compete with them. Frankly the bus competes pretty well in the northeast corridor as well.

The next thing coming literally down the road is a driverless automobile. So it seems to me people are talking about we have got to pour more money into Amtrak need to explain why, with the exception of northeast corridor, all these new technologies aren't going to render it obsolete probably within 10 or 15 years.

BREAM: OK, now, I must remind everyone this is the lightning round. I'm going to go on to next topic, Jason and give you the first stab at this. This is what George Stephanopoulos has had to say in the wake of revelations that he gave $75,000 is donations to the Clinton Foundation while also grilling a man who wrote a book about the Clinton Foundation.

GEORGE STEPHANOPOULOS, ABC NEWS: Over the last several years, I have made substantial donations to dozens of charities, including the Clinton Global Foundation. Those donations were a matter of public record. But I should have made additional disclosures on air when we covered the foundation. And I now believe that directing personal donations to that foundation was a mistake.

BREAM: Jason, good enough for you?

JASON RILEY, WALL STREET JOURNAL: He should have disclosed that he was donating to this. If he violated some ABC News policy for not doing that he should be punished for doing that. I have no problem with that.

But I think claiming George Stephanopoulos' scalp, it might make some Republicans happy but it's not going to change the fact that 80 to 85 percent of the Washington media corps is in the tank for Democrats. And that's the real problem here. OK, get George Stephanopoulos off the debates, but he is not going to be replaced by George Will or Jonah Goldberg. That is fundamentally the issue here.

So let him apologize. Also, you know, George Stephanopoulos is a very established figure. He has been around for 20 years in public life. I find it hard to think there are a lot of people out there who give him a pass for former Democratic operative helping the Clintons get elected are drawing the line at this donation. I just don't think there are a lot of those people out there.

BREAM: A donation directly connected to a story that you are doing, Chuck?

LANE: Well, that was the problem. When he said this on Jon Stewart, he said people are giving money to the Clinton Foundation to buy access. That seems rather different in hindsight, doesn't it? George Stephanopoulos has himself raised the question like were you buying access by giving this money? So I think he still has a little bit more explaining in his future.

BREAM: All right, and we're going to quickly work through our winners and losers starting with you Jonah on this Friday.

GOLDBERG: My winner is the Bill de Blasio wing of the Democratic Party which has successfully pushed Hillary Clinton, who is running essentially unopposed, ever further to the left. That's a really remarkable thing. And my loser this week is Senator Sherrod Brown. I call him Sherrod. I just call him by his first name because he claims that President Obama calling Elizabeth Warren by her first name was sexist. It was a desperate Hail Mary pass. It was lame as all get out and Sherrod should know better.

LANE: My winner this week is congressman Jim Sensenbrenner, Republican of Wisconsin and fellow sponsors of the USA Freedom Act which passed overwhelmingly in the House to rein in the NSA. My losers are the two people up there, Harry Reid and Elizabeth Warren who staged this one day revolt against the Trade Promotion Authority that immediately collapsed.

RILEY: My loser of the week is Jeb Bush for repeatedly flubbing a question about his brother and the war that he had to know was coming and will continue to come. And it confirms the biggest fear of his backers, which is that his last name will be a liability.

And my winner of the week is Palestinian Authority Mahmoud Abbas for getting the Vatican to recognize the Palestinian State, which of course will only feed this false narrative that it Israel that is standing in the way of peace in the Middle East.

BREAM: Thank you, panel. Stay tuned, though. The ongoing controversy over deflate-gate and the odds Tom Brady gets out of the punishment levied by the league.